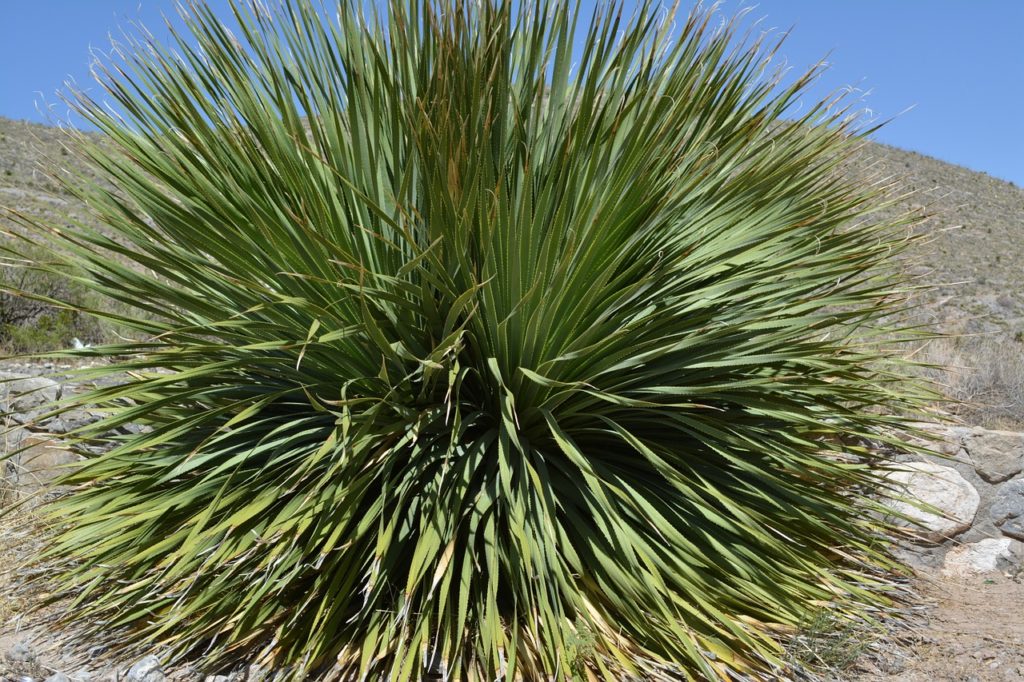 Yucca plant is a genus of many perennial plants, trees, and shrubs; however, few are found as houseplants with the label “yucca plant.”

One of the highest challenges in designing a garden is to create the right amount of textural contrast. Too little and the garden becomes overly soft; too much and the space feels unwelcoming and rigid.

In all shades of greens, grays, blues, and striped variegation, their linear evergreen foliage grows in lovely rosettes that offer year-round geometry and rhythm.

There are about 40 species of yuccas, harking from the coastal United States, the interior West, the Southwest, Mexico, parts of the Caribbean, and Central America.

Choices range from small, stemless, winter-hardy plants to lush, shrubby, subtropical species and, perhaps the most famous, the grand treelike types associated with the Southwest.

Yuccas are undemanding. Well-drained, not-too-rich soil is best; heavier soils are tolerated by a few species and drier regions. In cool climates, they require full sun, while in the hottest, sunniest places, part shade serves them well.

Yuccas are long-lived and do not like to be moved, especially once mature; their long, fleshy roots resent damage and disturbance. Watering is essential during establishment but can soon be tapered off.

Although they are drought-tolerant, yuccas need some irrigation if it fails to rain for more than a month over the hottest times of the year.

Soap was made from the slimy substance of the roots of many species of Yucca, hence the common name “soapweed.”

Names such as “bayonet,” “Spanish dagger,” and “Adam’s needle” allude to the stout terminal spines on yucca leaves.

Some species are planted underneath windows in urban areas of the Southwest to deter burglars-it’s best to place them away from human traffic and mulch or underplant them to minimize the need to weed close by. Some species have a gentler demeanor, with no spines and pliable leaves.

A few trunked species shed their old leaves, while most keep them as a dried “skirt” of sorts. Whether one wants a sheared trunk or a hairy textural look is a matter of taste. In regions where trunked species are marginally hardy, the skirt is best left on for insulation.

I leave plants shaggy in the garden but shear them when grown in a container. Yuccas grow well in large pots, as they require neither much water nor rich soil.

Be forewarned, however: Their weight and spines combine to make potted yuccas challenging to transport.

Smaller Yuccas For gardens with limited space, or where a trunked yucca looks out of place, we have a host of smaller, stemless yuccas from which to choose. Hardy Plains native Yucca glauca (Zones 3 to 9) offers narrow, spiky, filamented gray-green rosettes.

The creamy, lightly-scented flowers in late spring are sometimes tinged with maroon. This Yucca has proven adaptable in more humid, cold climates as well.

Its wider-leaved hardy cousin, the banana yucca (Y. baccata, Zones 5 to 9), has striking, stiff olive green, gray, or powder blue leaves with curled filaments along the edge. It has not proven tractable in humid regions.

Coastal natives with broad, pliable foliage and good tolerance of moisture and humidity include the popular Y, filamentosa, Y. flaccida, and Y. smalliana (Zones 5 to 10). These come in several variegated forms with cream or gold edges or central stripes.

All three species need supplemental irrigation in the drier parts of the country. Y. filamentosa is the most commonly available, with heavily filamented, relatively user-friendly foliage.

Pink-flowered selections and an incredibly handsome, extra-broad, and stout-leaved form, var. concava, can be had.

Trunk-Forming Yuccas For a solid and immediate statement in the garden, whether to lend a modern touch, give a feel of tropical power, or resonate with the desert, the trunked yuccas are unparalleled.

The latter can reach 30 feet tall, the former about half that. Variegated and silvery forms are available, and all do best with a bit of shade, especially in the afternoon. They tolerate wet to dry soils and also make good (though significant) houseplants.

It’s tolerant of sun or shade, wet or dry, and temperatures as low as 10° F. It comes in different variegations and is very popular in the South.

For cold climates, the choice of trunked yuccas is more limited. High-desert native Y. data, the state flower of New Mexico, is my favorite, with a dense rosette of pencil-thin, pliable, heavily filamented foliage and big panicles of fragrant flowers.

It thrives in my Zone 5 Colorado gardens but insists on dry air and soil. The narrow green or blue foliage of Y. thompsoniana and less stiff Y. rostrata is elegant and profuse, charming when backlit because of its translucent yellow margins.

Both species have proven hardy in Zones 5 to 9. Y. rostrata tolerates humid climates too but tends to look out of place in gardens in those regions as it has a definite dryland countenance.

Both species look lovely with their fine-textured skirts left on and bloom regularly and dependably.

Perhaps the most beautiful Yucca is California native Y. whipplei, a mid-sized stemless plant that is shy to bloom.

It is hardy to about 10° F and makes a good container plant. Whatever Yucca you choose to bring into your garden, it promises to be a showstopper in its own right.

* Easy to grow and long-lived

* Adds textural contrast to the garden

If the conditions are right, growing the yucca plant is not overly tasking choir. They seem to thrive better if let alone than if you continuously meddle with them.

As already stated above, if you give them too much water, it will start to harm the plant’s root, and if it becomes soggy, it is a clear sign you went too far with watering.

If you place your yucca in a sunny spot with low humidity, it will be the best place for the plant.

Pests show a little interest in yucca plants. However, a scale can do some serious damage.

During a prolonged period of time, the lower leaves of the yucca plant will fall on the ground forming a circle around the stem, which gives the appearance of a small tree.

If you have small children in your household, it is wise to select yucca species without pricks so kids will be safe.

Naturally, yucca is growing in a dry sandy desert environment. Indoors, the best idea would be that you plant it in a drained and loose potting mix.

This potting mix need not be special, and the best is to use an inexpensive potting mix and throw in some coarse sand horticulture-grade. Also, you can add perlite to aid drainage.

Yucca likes full sunlight, So if you plant them west-facing, they will be quite alright.
If you plant them in a low light spot, it may cause a low number of flowers, and the plant will hardly get full growth potential.

On the other hand, if you want it to grow slower, just put it in a shadier spot.

So far, you already know that the yucca plant is susceptible to overwatering. You can water it regularly in the Spring and Summer; be sure to do it moderately.

During the winter, watering should be minimal. Under no condition, leave your Yucca Plant in a tray with traces of water.

Yucca is accustomed to the desert environment, with temperatures going over 90 degrees.
Fahrenheit as well as go as low as the 30s during the night. Hence it is ideal for indoor temperature in your room.

During the growing season, fertilize it with liquid fertilizer once per month usually is enough.

An interesting variety is of this plant is known as Red Yucca Plant, also called  Texas Red Yucca (Hesperaloe) 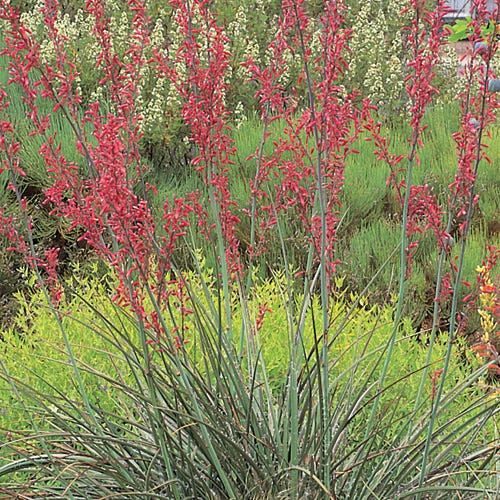 A hummingbird’s delight that produces tall spikes of reddish-pink flowers blooming all summer.

Yucca Plant contains steroidal saponins. Once ingested by animals, it provokes some or all of these symptoms; vomiting, drooling, dilated pupils, incoordination, weakness.

However, it is much more dangerous for big animals drawn to this plant. Smaller domestic animals, dogs, and cats usually exhibit mild symptoms.

How to Propagate Yucca Plant

A popular choice is cuttings from the yucca plant. Use cutting from mature growth and not from new development since mature growth is less likely to develop rot.

The best time to do cutting in Spring is to do it in summer if you chose. Sharp Shears are perfect for cutting; cut at least 7.5 cm or more from the plant.

Once done, strip all from the cutting but the top few leaves. That will reduce the level of moisture lost from the plant as it grows new roots.

Move your yucca plant cutting in a cool shady place for a couple of days. This will enable cutting to dry out and will stimulate better rooting.