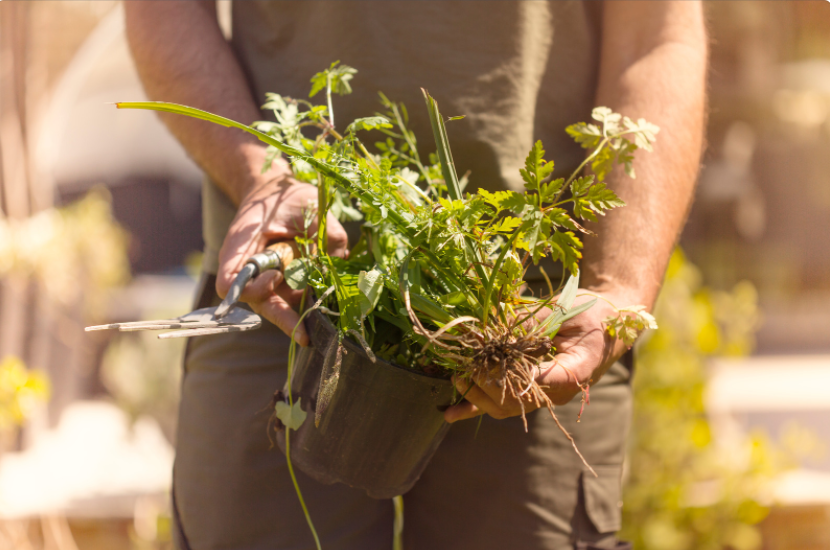 What’s growing in your backyard? Could be lots of healing in those healthy weed plants!
It’s amazing how many weeds that were once considered worthless are now highly prized for their health-giving properties.

Though herbal healers have been using these botanicals for centuries, you’re probably still driving yourself nuts trying to dig them out of your lawn. Want some great reasons to end all that backbreaking weeding? Then read on.

STINGING NETTLE (Urtica dioica) is a common weed you learn to identify fast–the second you’ve been stung by its irritating leaves.

Folk uses of the plant range from treating asthma to stimulating hair growth. The tasty, very young leaves are often cooked and eaten as greens. And there’s more: Science is beginning to substantiate nettle’s folklore with a few facts.

Clinical studies suggest that nettle root extract can relieve the symptoms of benign prostatic hyperplasia (BPH), a nonmalignant enlargement of the prostate gland.

No one knows yet exactly how it works, although several theories have been proposed. Yet, according to German Commission E (a group of independent scientists appointed by that country’s equivalent to our Food and Drug Administration), nettle is an effective treatment.

Two other preliminary findings for this herb interest me. The first is a German study from 1996, in which 40 people with arthritis were split into two groups.

One group was given 200 mg of only diclofenac, a nonsteroidal anti-inflammatory drug; the other group received 50 mg of diclofenac along with 50 g of stewed nettle leaves.

Another promising nettle trial was conducted a decade ago at the National College of Naturopathic Medicine in Portland, OR. This double-blind study was designed to see whether nettles had any effect on easing hay fever symptoms.

Some 58% of participants said that nettles were “moderately to highly effective” for symptom relief. In his book Natural Health, Natural Medicine (Houghton Mifflin, 1995), alternative medicine expert Andrew Weil, MD, recommends trying freeze-dried nettles as a hay fever remedy. As a bonus, nettles are rich in minerals.

DANDELION (Taraxacum officinale) leaves have diuretic properties: They can help flush excess fluid out of the body. The roots stimulate the flow of bile, thus acting as a mild laxative.

Bitter substances in the roots also tend to increase the appetite. The herb is usually consumed as a tea prepared from 1 tablespoon of either roots or leaves in 1 cup of boiling water.

Few people enjoy a tea made from the roasted dandelion root as a coffee substitute.

A widely used folk treatment for bruises, abrasions, and minor cuts is PLANTAIN leaf (Plantago lanceolata), applied to the wound. The fresh leaf is crumpled to allow some of the sap to flow, and the crushed plant material is held in place by a light bandage.

The German Commission E approves plantain for its external astringent and antibacterial actions; internally, it’s approved for inflammations of the mouth and respiratory tract.

Many of the trails I hike in the summer –and many of our highways too–are lined with the attractive blue-flowered weed, CHICORY (Cichorium intybus).

Both the leaves and roots of chicory contain bitter substances that act to stimulate the appetite–and also ease an upset stomach.

Make it as tea, using 1 teaspoon per cup. Chicory root is also roasted and ground to prepare a rich-tasting caffeine-free coffee substitute.

YARROW or milfoil (Achillea millefolium) is sometimes cultivated for its calming properties, with good reason. Yarrow contains a volatile oil that eases muscle spasms and soothes inflammation. Use 2 teaspoons of dried yarrow per cup of boiling water.

ST. JOHN’S WORT (Hypericum perforatum) is probably the most astonishing of all weedy herbs. Fifty years ago, Klamath weed, as it was then called, covered more than 2.5 million acres of rangeland mostly throughout northern California and southern Oregon.

It was considered a pest because, when consumed in large quantities, it made livestock susceptible to sunburn, blisters, and hair loss, so ranchers controlled it with herbicides.

When this didn’t work, leaf beetles that fed on the Klamath weed were introduced from Australia, and by the 1960s more than 90% of St. John’s wort plants were exterminated.

Who knew that 30 years later, St. John’s wort would become a top-selling herbal treatment for mild to moderate depression?

Over the years, it probably raised the spirits of a lot of Australian leaf beetles, but herb marketers are pretty depressed at the thought that a huge portion of a valuable cash crop has been wiped out.

Miles of coastal lowlands from South Carolina to Florida are covered with a short shrubby palm known as SAW PALMETTO (Serenoa repens).

And in some places, the growth is so dense and the saw-toothed leaves so threatening as to make the terrain all but impenetrable.

But in the early 1990s, European clinical studies showed that the fatty materials in the plant’s berries were effective at relieving the symptoms of BPH.

Now an extract of the berries has become one of the most popular herbal remedies in the US, and their harvesting is one of the significant agricultural industries in Florida.

Because medicinal herbs are hardy and often resist efforts to eliminate them, many are considered weeds. Some, whose properties aren’t as well established as those discussed here, may someday also be proven useful.

As they say in the antique business, “Today’s trash maybe tomorrow’s treasure.”

Andrew Weil, MD, recommends trying one or two capsules of freeze-dried nettles every 2 to 4 hours as needed to relieve your hay fever symptoms.

These Herbs Are No Dieter’s Dream

Q. I came across a weight loss product whose active ingredients are epitonin, weidewinde, and Fucus vesiculosus. The manufacturer said these herbs were discovered in the forests of Washington State. What are they? Do they really work?

A. Epitonin is a fancy name for ephedra or ma huang. It is a Chinese herb that contains ephedrine and other stimulant alkaloids. Weidewinde is apparently a misspelling of Weiderinde, the German name for willow bark.

It contains small amounts of salicin, an analgesic chemically related to aspirin. Fucus vesiculosus is a brown seaweed, commonly called bladderwrack or kelp. It contains an indigestible carbohydrate called algin, along with iodine and lots of salt.

Of these three plants, only willow bark is found in Washington forests, although brown seaweed often washes up on the beaches there.

Because of possible side effects, especially high blood pressure, ephedra is not recommended for long-term consumption, unless you’re under a physician’s care.

Willow bark in no way promotes weight loss. In large amounts, bladderwrack acts as a bulk laxative, causing a loss of water, but not fat, from the body.

In iodine-deficient people, it may stimulate the production of the thyroid hormone, but long-term use of large doses may present some health risks, including hyperthyroidism.

Its use is not recommended by the German Commission E.

Don’t Think of These Weeds As Worthless!