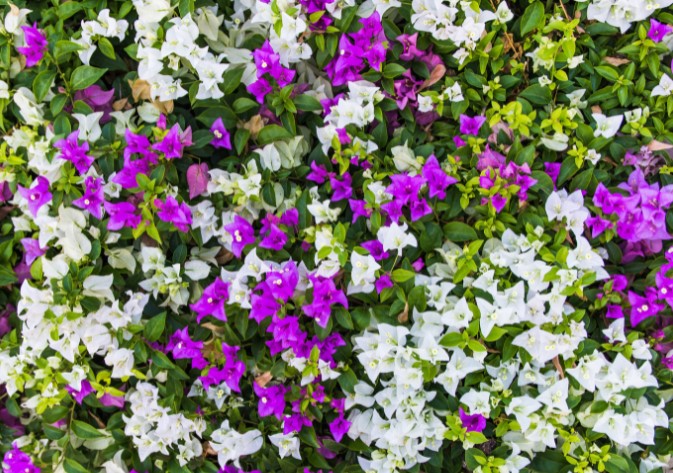 The Bougainvillea grows in the Amazon rainforest in South America, like Brazil, Bolivia, Peru, Ecuador, Colombia, and Venezuela.

9 Varieties of Bougainville I Prefer

Bougainvillea Alba produces papery clusters of white bracts over the stems from summer to autumn; however, it can flush flowers across the year. It is best planted in full sun position with well-drained soil.

Bougainvillea Alba will make a colorful accent on walls or pergolas.

Bougainvillea California Gold is one of the best-performing yellow-flowering bougainvillea varieties. It begins blooming at an early age and produces warm yellow bracts on and off through the year.

Bougainvillea Easter Parade is a hardy creeper with silvery pink medium-size bracts.
It is a vigorous grower and flowers most of the year. It is best in the full sun, can be pruned to shape, and is suitable for pergolas, banks, and tubs.

Bougainvillea Mrs. Louis Waltham is a hardy creeper with a long flowering period in winter and summer. It likes full sun and can be pruned or trimmed as desired.
Water frequently during summer.

Bougainvillea Mrs. Butt is an evergreen climber that produces masses of medium-sized, crimson bracts. It is the ideal climbing plant for pergolas, fences, garages, or any unsightly objects in your yard. Or it can be used as a very colorful tub specimen.
Bougainvillea Mrs. Butt prefers a warm, sunny position with well-drained soil.

Bougainvillea Raspberry Ice has a profusion of magenta-red blooms that contrast strikingly with variegated green and white foliage. The flowers remain colorful for weeks and bloom almost all year long. Though not a great climber, the Raspberry Ice is perfect for a garden feature, pot, or in a hanging basket.

Bougainvillea Singapore Pink is a compact grower with a bushy habit that can be easily shaped. This variety displays beautiful clusters of huge, bright, lavender-pink bracts.
Bougainvillea Snowcap is a fast-growing semi-evergreen vine. It produces large heads of pink/white bracts that usually flowers multiple times across the year.

Bougainvillea Tango is vigorous, cascading, and dense plant that produces young bracts that are orange, opening to clear orange and fading to light pink, giving a multi-colored look.

It has a recurring flowering habit and has medium to strong thorns.

Many people kill bougainvilleas with kindness and over-fertilizing rather than neglect.

When you see them growing in areas such as Agnes Street in Rockhampton opposite the water reservoir, on a north-facing slope, and receiving no additional water other than natural rainfall, it makes you realize how hardy these plants truly are.

Bougainvilleas grown in rich soil and over-watered and over-fertilized will produce many leaves but very few colorful bracts.

Bougainvillea can be grown in various ways, including container specimens, hedges, standards, and climbers.

Thorns are usually a problem, so always take care of placement and maintenance.

They are versatile, drought-tolerant, and with regular pruning, they make an ideal choice for our hot summer gardens.

It would help if you always were careful of which variety you plant, as many are rampant climbers, which should be avoided in a small home garden.

The larger they are, the longer the thorns! I would recommend pruning after flowering.

If you do have one of those rampant bougainvilleas, don’t be afraid to take a chainsaw to it and cut it to a foot off the ground, then you will be able to prune and shape it as it regrows.

Bougainvilleas are virtually pest and disease-free, and I would suggest removing those long water shoots to keep the shrub or climber to the densest possible shape.

Bougainvillea was named after the French navigator, Louis de Bougainvillea, who discovered the vine that now has his name: it was a botanical highlight of a voyage to Brazil in 1768.

The colorful displays produced by bougainvilleas are not by the flowers but by the bracts surrounding the flowers, which are small or non-existent in most flowers. These colorful bracts, developed over thousands of years, attract bees and butterflies to the tiny flowers, after which pollination results.

The bougainvillea root system is highly fragile. The plant doesn’t appreciate being moved. Take extreme caution when extracting the plant from the pot before placing it in the ground.

With plants grown in rich soil that is over-watered and over-fertilized.

Bougainvilleas grown in these positions tend to produce many leaves but very few colorful bracts.

I recall once being told by one of the early champion gardeners that his secret to prize-winning gardens, of which Bougainvilleas were a feature, was not to water his Bougainvilleas until their leaves had drooped for at least a day.

He was well known for wanting to know the exact day the judges would visit his garden so that he could time his watering to extract the best flowering display.

Bougainvilleas are virtually pest and disease-free, and I would suggest removing the long water shoots to keep the shrub or climber to the densest possible shape.