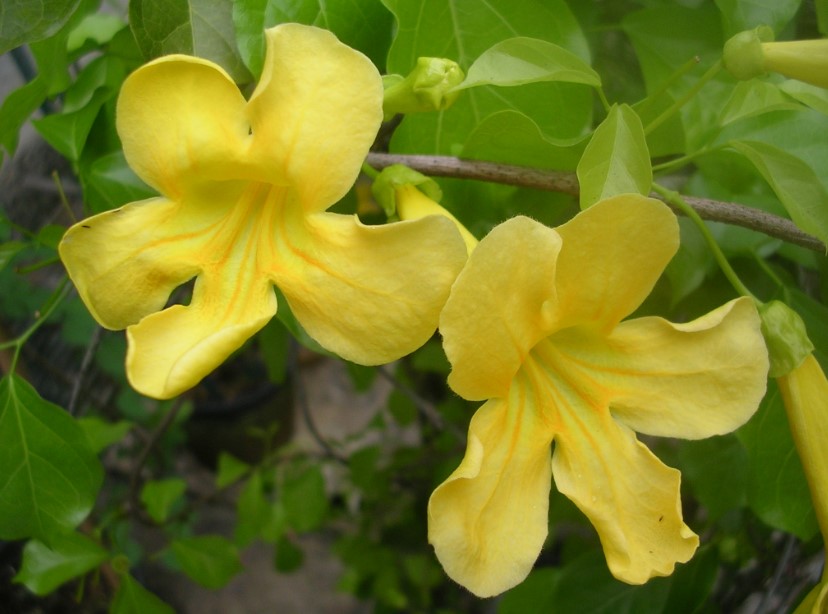 What is a cats claw vine plant? Cat’s claw (Macfadyen unguis-cati) is a prolific, fast-growing vine that produces tons of bright, vibrant flowers.

It spreads quickly and is considered invasive in some places, but it can have a big payoff if you treat it right.

Growing a cats claw vine is easy. The problem usually isn’t so much keeping it alive as keeping it in check.

Cat’s claw plants spread through underground tubers and often pop up out of the ground in unexpected spots. The easiest way to prevent spreading is to plant it in a restrictive spot, like between a wall and pavement.

Cat’s claw is winter hardy in USDA zones 8 through 12 and evergreen in zones 9 and above. It can extend 20 to 30 feet in length, as long as it has something to climb.

It does well on trellises, but it’s known for its ability to cling to and climb almost any surface, including glass.

How to Grow Cats Claw Vine

Cats claw plant care is easy. The vines tend to prefer moist and well-drained soil, but they’ll do well in virtually anything as long as it’s not soggy.

They like full to partial sun. Propagating a cat’s claw plant is easy – it grows well from cuttings, and it can usually be started successfully from the seeds found inside its seed pods, which turn brown and split open in the autumn.

Collect the seeds and keep them dry until you want to plant them. Press them into a pot of growing medium, but don’t cover them.

Keep the soil moist by covering it with plastic wrap – the seeds should germinate in 3 weeks to 3 months and be transplanted to their permanent spot in the garden.

After that, the plant basically cares for itself, other than occasional watering. Pruning the vine can also help with keeping it more manageable.

In the medicinal system of the Ashaninka Indians of Peru, the human being is made up of body and spirit–flesh (ivatsa) and “deepest being” (isancane).

Similar to many traditional systems, health is considered to be a state of harmony, with the literal translation of the phrase “I am healthy (nocaratanaje)” being “I carry harmony,” according to Klaus Keplinger, who studied the Ashaninka during nine trips to the Amazon rain forest (J. Ethnopharmacol. 1999;64:23-34).

According to the Ashaninka, disruptions in the communication between body and spirit result from anxiety, and preparations of powerful plants (saventaro) that are inhabited by good spirits can eliminate these disruptions and restore health and harmony.

One of these flowers is Uncaria tomentose, or Una de Gato (cat’s claw), so-called because of its distinctive curling hooks-shaped flowers.

A juice of sliced root bark boiled in water is used in traditional Peruvian medicine to treat numerous inflammatory illnesses, ulcers, and infections.

Cat’s claw has also been tested for use in knee osteoarthritis. In a multicenter, double-blind study, 45 men were randomized to receive 100 mg of freeze-dried cats claw or placebo daily for 4 weeks.

The cat’s claw group experienced significant improvements in pain associated with activity and patient and physician assessment of disease activity.

The authors observed a reduction in PG production, which they attributed to inhibition of cyclooxygenase-2 expression.

They wrote, “Of particular interest in the treatment of arthritis is the ability of cat’s claw to not only confer benefit to the joints but also negate the side effects of NSAIDs on the stomach and intestine …

This Amazonian botanical not only treat the arthritic disease process but also reduces the toxic side effects of the current standard pharmaceuticals used in the management of arthritis.

The concept that botanicals can be used to reduce the toxicity of pharmaceuticals is an intriguing and greatly underexplored area of investigation.”