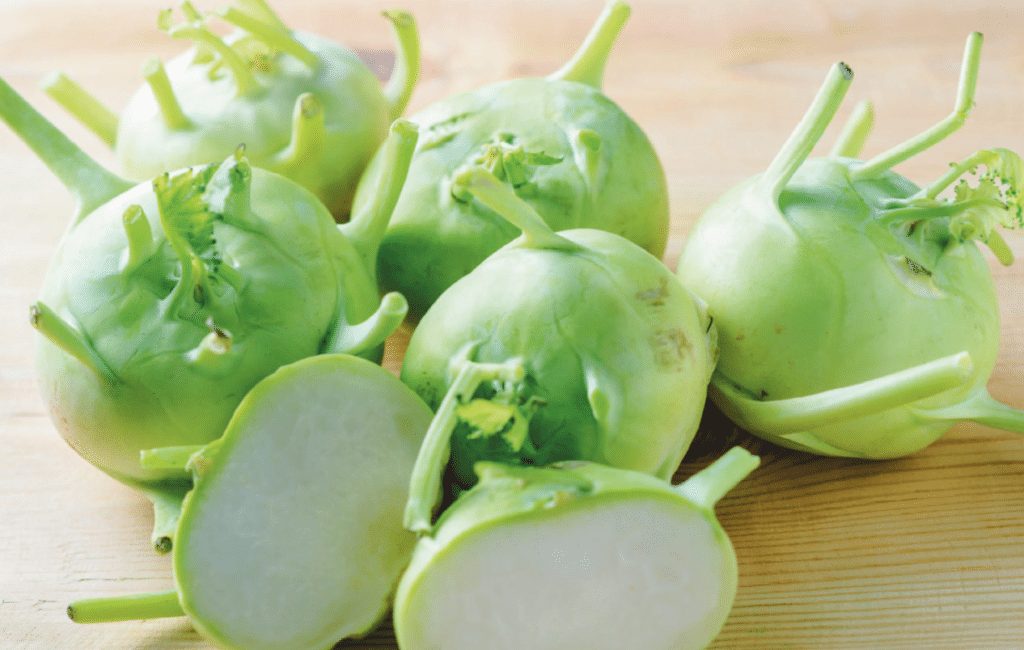 Ok, it’s like a turnip, but kohlrabi is yet another descendant of wild cabbage.

It looks like a sputnik, tastes a bit like broccoli, and is grown and enjoyed all over Southeast Asia, but kohlrabi undoubtedly comes to us from northern Europe.

The common name (pronounced coal-rah-bee) is a combination of the German words for cabbage and turnip,

It’s true that, like its close relative’s cauliflower, Brussels sprouts, and kale, it originates from the wild cabbage.

But its only resemblance to the turnip is its spherical shape. Unlike turnip, kohlrabi is not a root vegetable but the swollen stem base (or bulb) of a shallow-rooted brassica.

Unknown in Europe until 500 years ago, kohlrabi was first mentioned in print by botanist Pietro Andrea Mattioli, who wrote in 1554 that it had “come lately into Italy.”

By the end of the 16th century, kohlrabi was being cultivated in northern and southern Europe and the eastern Mediterranean.

It probably accompanied German immigrants to the US, where its presence was noted in 1806.

Despite its wide popularity elsewhere, the “German turnip” has hardly enjoyed a walk-up start among Australian veggie lovers.

However, for its crisp, sweet taste and ease of cultivation, it’s worth chasing down.

However, once you start looking around, you’ll find kohlrabi is readily available from Australian seed companies, primarily in white and purple varieties.

‘White’ or ‘White Vienna’ — actually more pale green than white — and the rather more attractive ‘Purple Vienna’ are heirloom varieties dating back to 1859.

Inside, they share the same white to-pale-yellow flesh. Eden Seeds also advertises ‘Gigante’ or ‘Superschmelz,’ a large, green-skinned form grown in the colder parts of Europe.

It has distinct advantages over smaller varieties in that it’s not prone to bolting to flower and doesn’t become fibrous or woody when mature.

Tolerant of a wide range of climates, kohlrabi will grow happily throughout the year in southern parts of Australia — but delay planting till August in colder areas.

In southeast Queensland, it prefers the cooler months. Avoid planting in the middle of
summer; kohlrabi can be slow to germinate in extreme temperatures, hot or cold.

Having said that, like all brassicas, it does best in full sun (but will suffer some shade) and a well-drained, slightly alkaline soil with a pH between 6.0 and 7.5.

In areas with more acidic soil, dig in some lime or dolomite before planting. Compost and manure or organic fertilizer will help wherever you are.

Seeds can be direct sown or started in seedling trays. Plant seeds about 6mm deep and space seedlings around 15–20cm apart allow the stems to swell.

This isn’t a great problem unless you intend to use the leaves in the same way some
people consume collard greens and kale.

Other problems include failure to germinate or bolting to flower without forming a bulbous stem.

Successful germination is more likely when the fresh seed is planted in moist soil while
healthy stems are promoted by plenty of nutrients, moisture, and sun in otherwise cool conditions.

When heat or water-stressed or harvested too late, kohlrabi gets tough and fibrous. Over-mature plants are still good for seed and can be left to flower and attract pollinators.

A rapid grower, kohlrabi is usually ready for harvest within 10 weeks of planting or when the bulbs are golf-ball sized.

Cut with secateurs or a serrated knife just above ground level. You can go on picking past tennis-ball sizes up to around 12cm across before the bulbs become too fibrous.

When you do pick your kohlrabi, it’s best used as fresh as possible. Store it in the fridge for no longer than 10 days as it soon starts to lose its crispness and fresh flavor.

You can also freeze kohlrabi for later use: first, cut it into pieces, then blanch for three minutes, drain and chill in iced water, and pack in freezer bags, first expelling the air.

Once frozen, it will keep for six months. Kohlrabi is low in calories but rich in vitamin C, potassium, folic acid, calcium, and dietary fiber.

Leaves and stalks can be picked when required for salads and stir-fries. Use them much as you’d use spinach or cabbage — in a coleslaw, for example.

Besides using the bulbs raw, you can bake, boil, steam, or fry them.

Some delicious ways of cooking this vegetable include stuffing the bulbs with pork mince and vegetable German-style,

making a delicious creamy soup by pureeing it along with potatoes, onion, and garlic, or using it as a substitute for the potato to make chips in the usual way.

You can also make it into fritters by shredding it and mixing it with egg and flour or breadcrumbs.

So, with all these great ways to use kohlrabi, it’s not as weird as it looks.