How To Grow A Cauliflower

How to Grow a Cauliflower, let’s say you’ve kicked some winners with kale, bewitched broccoli, and conquered cabbage.

You can trade tales of the horrors of cabbage moth with the most venerable of vegetable glowers.

You’ve been expanding your patch, and you’re up for a new challenge-so. Why not give Cauliflower a crack?

Cauliflower has come to prominence of late and, thankfully, is no longer thought of as so bland it needs to be coated in the cheesy sauce to be loved.

Having found new friends in the paleo, vegan, and gluten-free communities, It now shines as a low carbohydrate ‘rice.’

Whole-baked Cauliflower is unexpectedly divine and is even more impressive when you’re baking your own homegrown, chemical-free head.

This brassica is the ultimate background performer, ticking away in the garden for so long that you forget it’s there, then emerging triumphant and fulsome.

If you have space and patience, it is tremendously rewarding.

This flowering cabbage was mentioned as ‘cynic? In the first century CE by Pliny the Elder in his Natural History.

By the 12-13th century, Arabian botanists described cauliflowers originating from Cyprus, and there was a trade-in seed for many years between Cyprus and Western Europe.

.’ At the same time, cauliflowers began to appear in French cookbooks and were already grown in Italy.

Cauliflower is a low-calorie, high-fiber food with good vitamins C and K and some B vitamins.

The purple color in cauliflowers such as ‘Sicily Purple‘ comes from anthocyanins.

These are water-soluble pigments found in many other plants and plant-based products, such as red wine, and well-known for their anti-inflammatory, anti-viral and anti-cancer benefits.

Nutrients and phytochemicals are retained best by eating Cauliflower lightly steamed or sauteed.

Cauliflower is best avoided if you have low thyroid function as it is goitrogenic, meaning It affects thyroid hormone production.

Cultivation from Seed to Curd

How to Grow a Cauliflower, growing cauliflower is not a casual commitment!

Choose a bed that hasn’t grown any brassicas, including kale or broccoli, for the last three years – this crop rotation will minimize pest and disease problems.

If possible, prepare your soil four weeks before planting seedlings by checking the pH.

One can purchase simple pH kits from your local nursery. Then, add plenty of organic
matter to help with soil moisture retention and microbial levels.

Spread around 50mm of compost and 25mm of well-rotted fowl manure over the
surface before forking through evenly.

Make sure your bed has good drainage as cauliflowers won’t tolerate wet feet.

When to Plant Cauliflower Seeds

In cooler regions, sow in spring and autumn, but plants are well established before freezing weather slows growth in autumn.

Conversely, if spring-sown seed or plants are not growing strongly before hot weather arrives, then they may be adversely affected, too.

By choosing different cultivars, harvests can occur from winter through spring and well into summer.

In subtropical and tropical climates, sow cauliflower seeds or seedlings in early autumn for a winter harvest, choosing quick maturing cultivars such as ‘Snowball’ or ‘Mini.

How to Grow Cauliflower From Seeds

Cauliflower seeds are usually viable for four years in good storage conditions. Choose good-quality, fresh seeds to give yourself the best chance of success.

I’ve found that planting quite small brassica seedlings gives the best chance of a good harvest, as long as they are protected from pests! 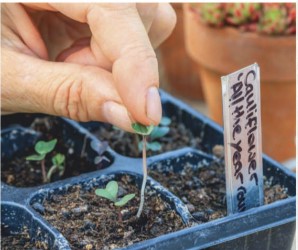 After preparing your soil, to sow seeds directly, ensure it’s broken down to a fine tilth and raked level.

Sow seeds around 40cm apart in rows up to 45cm apart, pushing each seed gently to a depth of around 0.5cm. Firm the soil on top of each seed and water with a fine spray.

Keep moist. Plant two seeds in each spot, then cut the weakest one-off at ground level in a couple of weeks.

To plant in punnets, sow seeds in seed raising mix to a depth of 0.5cm.

Water once or twice daily while seedlings emerge over the next two weeks until they’re ready for planting a couple of weeks later.

As seedlings emerge, whether in the punnet or the ground, fertilize with liquid seaweed and an all-purpose liquid feed, both diluted to the rates given on the bottle for seedlings.

For planting, space seedlings the same as for seeds to allow them to grow to their best size.

Sudden dry or hot weather can cause issues with flavor and head formation, so mulch around your plants to keep soil temperatures even, and be sure to water regularly and deeply.

Using a drip system close to the roots can help with water getting to where it’s needed, or in a small garden, you might pull back the mulch gently at the base of each plant when hand watering.

Best results are achieved with ongoing fertilizing once heads, known as curds, start to grow.

Feed your cauliflower weekly with diluted liquid seaweed as well as a nutrient-rich liquid feed, such as compost tea or worm leachate tea, or a commercial complete fertilizer.

The worst cauliflower pests are the dreaded cabbage moth and other moths and aphids and slugs at harvest time.

For aphids, place yellow plastic dishes half-filled with water near your plants to attract aphids to a watery grave.

Cabbage moths can be deterred by fake ‘moths’ cut out from white, plastic ice-cream lids
and attached to the end of thin stakes, then put into the garden as if the moths are hovering over the plants.

Cut heads when they are tight and before the curds start to open up.

As cauliflowers are heat sensitive, pop your harvested caulis in the crisper section of your fridge if you’re not planning to use them straight away. 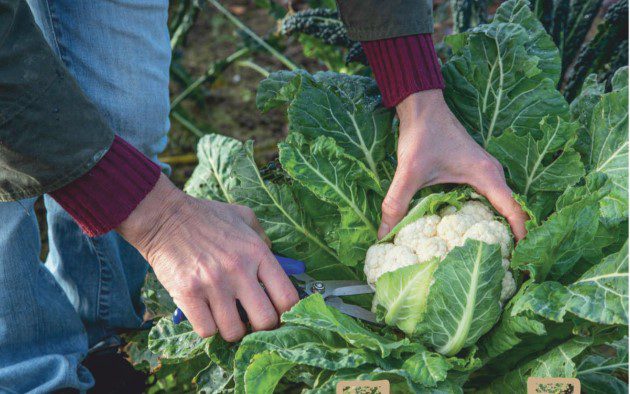 I now grow all my brassicas inside insect-excluding mesh – worth the effort to set up given there is no cabbage moth or aphid anxiety!

If you get caterpillars on your plants, use homemade soap spray (make by dissolving two tablespoons of soap flakes into one liter of water) or, if you’re losing the battle, use Bacillus thuringiensis (Bt), also sold as Dipel.

This is a biological control that affects only caterpillars, which takes a couple of days to work, so keep up removal by hand while you’re waiting.

Catch slugs with jars of beer set into the soil near ground level. Also, protect by placing plastic garden pots with a hole cut in the base over the top.

In hot weather, cauliflower heads can get sunburnt easily, affecting the flavor and color.

How to Grow a Cauliflower and Seed saving

As brassicas cross-pollinate easily, many varieties have been lost. If you would like to save your own seeds, remember that most heirloom cauliflowers in Australia, except for ‘Snow Ball,’ are biennials, so they will take two growing seasons to produce seed.

The Seed Savers Handbook recommends that plants should be separated by 36O- 9OO m from any other Brassica o/eracea to remain true to type.

Alternatively, make sure that only one brassica species is in flower at a time.

IN THE KITCHEN AND BEYOND

A versatile vegetable: the French eat cauliflower raw as crudites, while Italians prefer it pickled in a mixed jar of giardiniera.

It’s tasty whether steamed, roasted, stir-fried, or deep-fried in batter. It adds flavor to a soup or curry.

Add young leaves to any dish and cut older leaves and the stems to cook in slower, longer-cooking dishes like minestrone.

Cauliflower can cause gas, which can be reduced by adding carminative herbs and spices,
such as winter savory leaves or fennel and cumin seeds and ground coriander.

Flavor-wise, other good partners for cauliflower are turmeric, garlic, cheese, almond, and mustard.

Cauli has risen in popularity in recent years due to its suitability for several special
diets, from gluten-free to keto.

It can be pulsed into ‘rice,’ used to make pizza bases, or even added to smoothies.

Finally, don’t forget to treat your chickens, who will always love a feed on cauliflower stems and leaves.