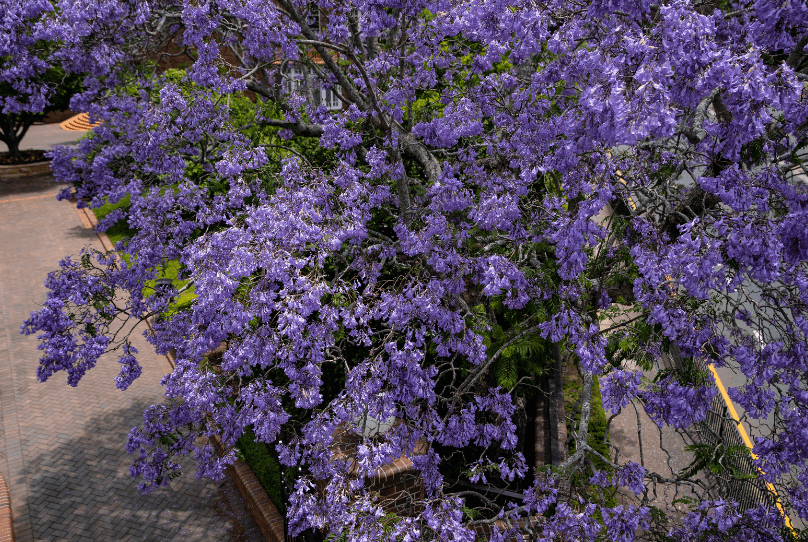 Jacarandas will grow in virtually any soil provided it is not too cold and wet. However, they do not prefer to be overwatered in summer and enjoy a reputation of being fairly drought tolerant.

How Fast Does The Jacaranda Tree Grow

In a tropical setting, the jacaranda tree grows approximately ten feet each year during its first few years. Its growth rate fluctuates according to the climate it is grown, slowing to a modest rate outside of its optimal tropical environment.

Only eight-year-old or older mature jacaranda will flower from late spring to early summer (though the tree can flower in warmer areas at any time).

Native to South America, this plant has become invasive in numerous world regions.

They often look their best in a front garden or overarching a drive or patio where they infuse light and create an air of serenity.

How To Grow Jacaranda Tree

They are not particularly difficult to grow as they are grafted onto the standard blue seedling form in late spring using a simple side graft.

How to Grow Jacaranda From Seeds

The fruits of the jacaranda tree are a one to a three-inch-wide, dry, brown pod that usually matures in late summer.

To harvest the seeds for replanting, remove the dried seed pods directly off the tree (pods that have fallen to the ground might not contain seeds).

This tree’s seeds should be planted between fall and early spring. This plant can also be propagated through the stem or branch cuttings (softwood).

Grafting is an alternative way. However, it is best performed by nursery or horticultural experts.

Compared to a plant developed from seed, a plant propagated by softwood cuttings will blossom significantly more quickly.

In addition, stem cutting is the more reliable way of propagation because the offspring will be a replica of the parent plant.

How to increase through stem cutting:

How To Prune Jacaranda Tree

Jacaranda is a brittle tree and tends to break up during high winds. Proper pruning can help develop a more vigorous tree, but will not ultimately reduce the risk of breakage during a storm.

Generally, pruning should not remove more than one-third of the canopy at any one time.
Tree pruning can be perplexing, but pruning becomes more understandable when done with a goal in mind.

The most common reason to prune a tree is to help it develop a strong structure and reduce the risk of failure. Young trees should be pruned to establish a central leader.

Any clustered branches should be thinned, and branches growing straight up in the upper third of the tree should be removed. Clean out any broken or damaged branches and those close together or rubbing.

Pruning can affect flowering, and since jacaranda blooms heaviest in the spring, the best time to prune is after flowering.

Pruning can also be used to enhance the look of a tree. But of course, your perfect tree will be different from mine. Consider the natural shape and growth pattern when pruning.

Jacaranda has a naturally open, irregular, airy look; no amount of pruning will make it develop and maintain a thick, dense canopy.