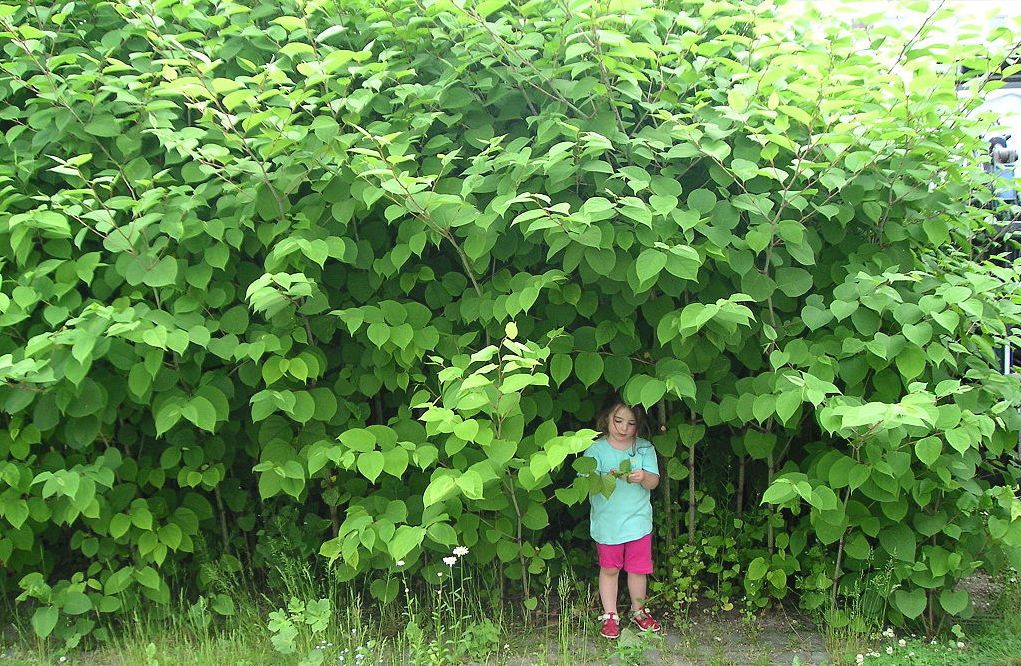 Japanese knotweed (Fallopia japonica) is a tall, herbaceous, perennial plant with woody rhizomes when mature. F. japonica is now recognized as one of the most problematic weeds in the UK and Ireland.

It is also recognized as one of the worst invasive alien species (IAS) globally, particularly in North America, Europe, Australia, and New Zealand.

Fallopia japonica was introduced to Europe from Japan in the mid-19th century by the Bavarian Phillip von Siebold, a renowned importer of exotic plants.

In 1850, von Siebold sent a package to Kew Gardens in London, including a female (male sterile) F. japonica plant.

Once established in Kew Gardens, it was distributed throughout the UK, being planted in Victorian parks and gardens.

Despite rumblings from Victorian gardeners as far back as 1898, for example, William, about the plant’s invasiveness, it was available for sale in UK nurseries up until at least 1990.

It was first recorded outside cultivation in South Wales in 1886 and is currently recorded in most hectads within the UK and Ireland (Botanical Society of Britain and Ireland.

On a global scale, its reputation as a problematic IAS primarily stems from its vigorous growth and impacts on riparian habitats coupled with the difficulty of eradication.

Verified impacts include the creation of dense monodominant stands, reductions in ecosystem services in riparian zones,

for example, by impeding access, negative effects on native plant and invertebrate assemblages in riparian habitats, reductions in species richness and abundance of native understory herbs,

shrubs, and juvenile trees in riparian woodlands modifications to nutrient cycles and impacts on flood defense through impeding water flow and facilitation of riverbank erosion.

I was shocked to see Japanese knotweed growing close to native orchids, violas, and Polygonatum in a renowned European wild lower haven I visited recently.

This invader, who hails from Japan, where it’s kept under control by local pests and diseases plus competition from other vigorous plants, has spread around the temperate world.

Like bindweed, it dies down to the ground in winter but regrows vigorously in spring.

By now, it’s evident, the canes having grown from their spring start to the height of an average man.

Even tiny pieces of the underground rhizomes readily grow into new plants, so amateur gardeners can’t dig it out completely.

This weed is so invasive it’s subject to legal controls. It would help if you didn’t cause it
to grow in the wild, allow it to spread to other gardens, or dispose of it anywhere that’s a licensed landfill site.

Fallopia japonica is closely related to two other members of the Fallopia genus, F. sachalinensis, and Fallopia x bohemica, which have similar invasive ranges and have similar impacts.

Use a specialist control company for a large infestation. If you want to tackle it yourself, vital glyphosate is needed, applied to the regrowth annually for around four years.

Direct damage: in the context of F. japonica

In certain situations, trees and vegetation can adversely affect structures by direct action, for example, structural failure of trees (collapse and impact), the effect of branches with super-structures, displacement/lift/distortion, and disruption of underground services and pipelines.

The main causes of damage due to direct physical contact by plants collapsing vegetation affecting building structures and power lines, and branch impact, are not connected in any reasonable sense to F. japonica since the species are not tall enough and do not possess heavy enough aboveground structures.

This is because F. japonica aboveground material dies back at the end of each growing season; thus, the plant cannot accumulate sufficient aboveground size and weight from successive years of growth.

Plants may also cause damage by applying to accumulate physical pressure on structures as they grow bigger over time; however, as stated above, this is comparatively rare in terms of consequential damage.

The biology of F. japonica creates it less qualified to inflict significant structural harm than many other woody plant species.

This conclusion has been achieved for all three of the primary mechanisms by which plants are familiar to cause structural damage: subsidence (indirect), collapse and impact (direct), and accumulating pressure due to growth (natural).

There is, in essence, no support for F. japonica as a significant cause of damage to property in the literature.

A study found that F. japonica is less likely to cause harm than other common species.

Based on the results obtained through surveys performed by PCA members, it is rather clear that the ‘seven-m rule’ is not a statistically solid tool for evaluating likely rhizome extension. F. japonica rhizome seldomly extends more than four meters from above-ground plants.

It is usually found within 2 m for smaller stands and 2.5 m for larger stands.

When this is studied in alliance with the water-use needs of an herbaceous perennial and the restricted presence of shrinkable clay soils in the UK, the likelihood of F. japonica being a significant cause of structural damage decreases further.