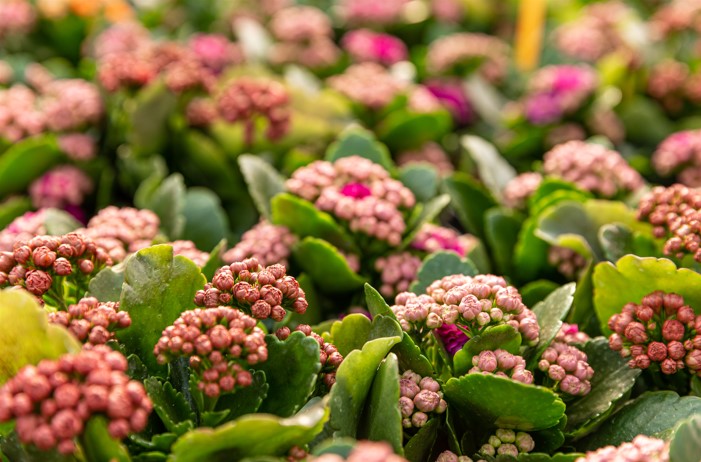 Besides being sold individually, kalanchoe is frequently grouped with other house plants in baskets or cute containers.

Now, there is some dispute over how to pronounce kalanchoe. My research indicates that most prefer Kal-an-KO-ee, and that’s the way I will say it from now on. But if in doubt, pronounce it any way you choose.

The plant is a genus of 130 annuals, biennials, and perennial succulents that grow in desert or shady areas of subtropical and tropical countries.

You’ll find them in Africa, Australia, Asia, Madagascar, parts of the Middle East, and pretty well any grocery store in North America.

In the wild, kalanchoe grows outdoors as climbers, shrubs, and small trees. We buy them as house plants, often disposable, but the habit of surviving and staying in bloom for longer than expected.

This is not only because our homes in winter have similar climates to the places of origin — warm and dry, but also because kalanchoe tends to thrive on inattention.

These are not orchids or violets that need pampering or intensive care. They’re tough little colorful houseplants that reward the owner with long-lasting flowers.

After arriving home from the store crammed into a bag with the TV guide, a case of pop, and a bag of Doritos, they will live and bloom long enough to convince even those with an any-color-but-green thumb that they might have a streak of green in them after all.

If you’ve just unpacked your groceries and there’s a kalanchoe sitting on the coffee table in front of you, and you’re wondering what to do with it, whether it should stay where it is or if it would look better on the counter in the bathroom, here are some pointers to aid you to get the most out of your plant — even have it flourish.

Kalanchoe prefers good light but not full sun, so keep it away from the south and west windows.

Despite surviving in desert conditions, your plant will need water occasionally. Keep them too dry, and though it may take some time, the leaves will eventually turn dull, and the flowers will fade and drop prematurely.

As a reliable moisture check, stick your finger in the soil. If it feels like Special K, water thoroughly, but then wait until the soil feels dry again — as much as a week or two.

Needless to say, your plant does not like wet feet, so remove any water from the saucer or tray that the pot might be standing in.

You won’t need to worry about fertilizing your plant as it will have been shipped to the store with enough rations for two or three months. As flowers die, snip them back.

Once you observe new growth on the plant, begin fertilizing, but use moderation. House plants die as much from over-fertilizing as anything else.

If you choose to repot at some time, the soil mix is important. It should be somewhat dry and sandy, well-drained — similar to a commercial cactus mix.

Light is the other factor that will have a large impact on your success as a kalanchoe grower. Like mums, Christmas cactus, or poinsettias, kalanchoe is so-called short days, or rather long nights, plants.

For a second blooming, restrict light to no more than 11 hours. Unfortunately, even a small amount of light during the long, dark period can discourage them from even thinking about producing new blooms. To get that second blooming will require you to be conscientious.

Slipping a cover over the plant each day at 5 p.m. and removing it the next morning at 8 a.m. may seem tedious, but make it a habit. Hey, people do it for their budgies.

However you treat your kalanchoe, it will do its best to hang in as long as possible.

After it passes on, I suppose you can pick up another plant with next week’s groceries, but anyone can do that.

Not all species of the kalanchoe are sought after for their blooms. Some species, including kalanchoe tomentosa, also known as panda plant, and kalanco beharensis, also known as velvetleaf, are instead grown for their striking leaves.

Jane Courtier and Graham Clarke, the authors of Indoor Plants: The Essential Guide to Choosing and Caring for Houseplants (1997, Reader’s Digest, $30), suggest repotting a kalanchoe into a one-size larger pot in the spring, using a soil-based potting mix with added sand or perlite.

They also note that kalanchoes, though normally trouble-free plants, can become infested with white mealybugs wooly patches that can be removed with a damp cloth or cotton swab.