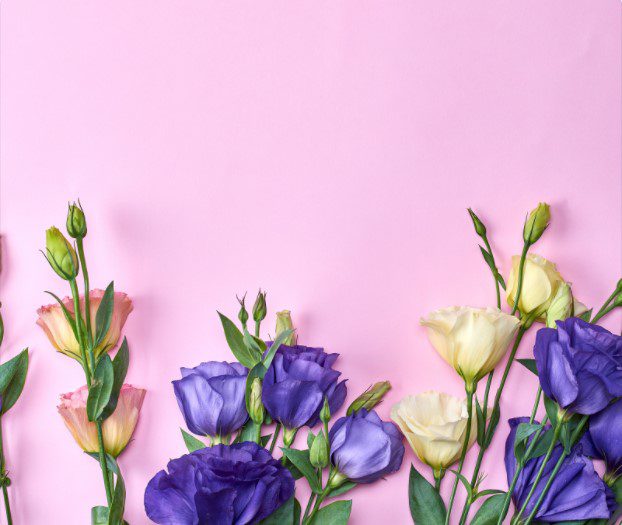 Lisianthus is a popular choice for floral designers looking for elegant flowers to use in arrangements. It is a versatile and classy flower that is often used as a focal point.

There are many options for colors and ruffles to choose from, including elegant buds and ruffled petals.

These delicate blooms are prized for their beauty and ability to last for two weeks or more as cut flowers in a vase.

It seldom happens that a brand new kind of flower is offered for home gardens.

New and often hybrid versions of old plants are often touted as new, so the individual flower is.

But brand new to me was lisianthus, offered at a CNE horticulture building sales stand as a pot plant in full bloom.

Flowers are large and cup-shaped from long oval buds, the open ones resembling those of canterbury bells.

Flower colors include purplish blue with a darker interior, salmon pink, and snowy white. The foliage is a medium green with a silvery appearance – altogether a beautiful new addition to a gardener’s repertoire.

My own experience with lisianthus as a pot plant in a west-facing apartment was negative: It did not survive five days in the heat without water, even though it was derived from a native western American wildflower.

Eustoma grandiflorum is native American prairie gentian occurring from Nebraska to Texas, where it naturally self-seeds.

It is an annual, or possibly a biennial, but wasn’t cultivated as a garden flower until Japanese breeders got hold of it. Their hybridizations produced new additions to our gardens.

Apparently, these new hybrids first were introduced to North American gardeners three years ago at Disney World in Florida, where an interesting planting suggested ways to use them – mixed with white and yellow pansies or with yellow snapdragons.

They were mixed with pink petunias, white snapdragons, and variegated ivy at a New England flower show.

Another possibility is interplanted – in spring, for us, unless some strains prove winter hardy when treated as biennials – with tulips, to take over flowering when the tulips fade.

Seed of old prairie gentians has been offered by some U.S. catalogs. Dominion Seedhouse lists it under Lisianthus Russellianus and notes they begin flowering in mid-July from a February sowing indoors, producing one flower per stem until frost. Height is given as around 20 inches (50 centimeters).

Park Seed of Greenwood, South Carolina, the source of so many unusual seeds for the home gardener, lists the Lion hybrid (“with blooms like roses but they last twice as long!”).

Park claims visitors to its trial garden in 1985 gave Lion more praise than any other flower; reportedly, seedlings produce 75 percent double flowers. Flowers were the same deep violet-blue, pink, and white as were shown at Disney World.

The single-flowered version, called Yodel By Park, comes in separate colors as well as mixed. Park says you can have flowers by June if you start seed indoors in February, that buds resemble roses at first, open to tulip form and finish like poppies and are drought and heat tolerant.

It further describes them as half-hardy perennials, which means they won’t survive winter outdoors here (but might under a reliable snow cover such as is usual west and northwest of Toronto).

Seeds of the singles are listed by Park at 95 a packet, the doubles at $1.75 in U.S. funds, with a $1 handling and insurance charge.

You should get an Agriculture Canada import permit, and you may be charged duty, although a packet or two often comes in unnoticed and duty-free, especially if sent first class mail.

It is probable these will soon be carried locally and may even be available as started plants. But if you want to start your own, you can write to Park Seed at Greenwood, S.C., 29647-0001, U.S.A.

However, starting plants from seed is not as easy as tomatoes are. It needs light to germinate, so the seed must be sown on top of the damp potting medium and covered with plastic or glass.

Germination takes around two weeks at a soil temperature of 70 degrees F (21C). Seedlings need brighter light than our windows usually provides at the recommended starting time, December or January, so fluorescent lights are suggested.

Household temperatures are okay for seedlings if you can let them drop 10 degrees F (5 1/ 2C) at night.

Seedlings do not seem to grow much for the first few months, but when they do, move them to individual two-inch pots and pinch out terminal shoots when plants have two sets of true leaves.

They go outdoors only after May 24. They need full sun and soil that is both porous and high in organic matter. They can be crowded to six inches apart.

Despite its common name, lisianthus, this plant has a long history with botanical name changes. The blooms of the lisianthus, regardless of their name, are what this plant is all for.

There are many colors available: pink, blue, purple, and purple. You can also find bicolor combinations of these hues.

You can also choose from a single flower with just one ring of petals in the center or a double with multiple rows of petals.

Lisianthus can be found in some western states’ ditches and grasslands. This plant can survive in harsh environments because of its thick, waxy leaves. The foliage also has a beautiful bluish-green color that highlights the blooms.

Plan to invest some time when growing lisianthus. It can take a long time to mature from seed. Occasionally it may take as much as 15 months to flower.

It isn’t easy to sow only a few plants from this plant’s seed because it is so fine and powdery.

Many of these varieties were developed to be cut flowers. Some of these plants will need to be staked to ensure they don’t fail.

Newer varieties have been bred to look dwarf, so they are better suited for home gardens. Pick stems that are close to, but not fully, open when choosing blooms for cutting flowers.

Buds that are too small or tight will not open fully on their own.