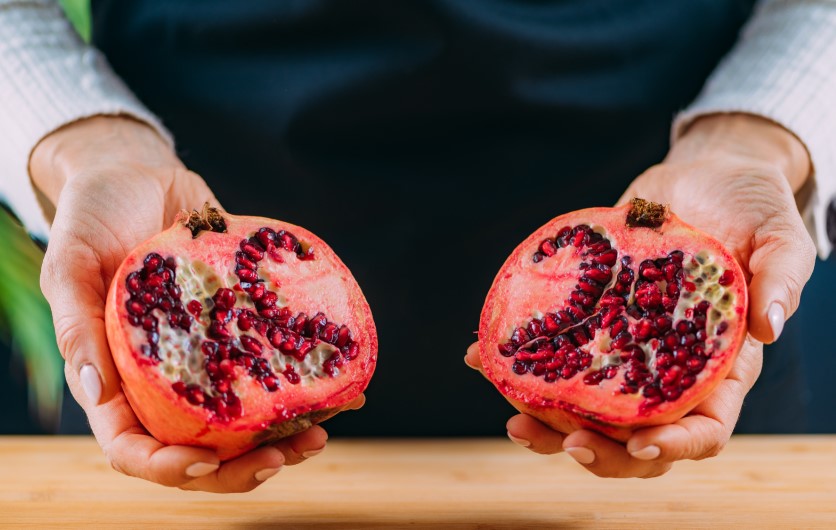 Pomegranate (Punica granatum) is the name given to an ancient shrub and its bright, edible fruit. The pomegranate originated in the region between modern-day Iran and the Indian Himalayas.

The pomegranate was cultivated throughout the Mediterranean and appeared in ancient religious texts, including Egyptian mythology, the Talmud, and the Bible.

The fruit, known for its ability to quench thirst, was carried frequently through the desert and the plant itself thrives in drier climates.

In what is now California, the pomegranate was brought to the United States by Spanish settlers in 1769. There are many varieties of pomegranates, which have been grown traditionally in different regions.

The pomegranates bush can grow 6–20 ft (2–6 m) tall, with branches spreading from four to fifteen feet across. In addition to its well–known fruit, the pomegranate bush also produces vibrant red-orange flowers.

The pomegranates fruit is a medium circular reddish fruit, about the size of a baseball with a protrusion on either end. The leathery rind protects multiple collections of seeds, separated by spongy white walls.

The seeds are each contained in a red sack, about the size of a popcorn kernel, encloses the seed and tart juice and pulp.

The tannin content of the plant has caused it to be used as a source for gathering tannin to cure leather.

The bright colors of the pomegranate fruit and flowers have been used historically to make dyes for fabrics. The foliage of the plant can be steeped in vinegar to make ink.

The bark of the pomegranate plant is used in Japan to make insecticide.

Though the branches of the pomegranate bush are small, the wood is hard and is often used for craft purposes.

Pomegranates and their juice are widely touted as having antioxidant properties. Scientists are beginning to conduct tests to determine the exact nature of pomegranate’s effects on the body.

A 2013 study began this process by examining the effects of pomegranate on protecting the kidneys of rats against a substance known to cause cellular damage.

Laboratory tests of the various elements of the pomegranates show that it has inherent antioxidant properties which gather and eliminate free radicals.

Further testing could determine whether these properties could be controlled and harnessed to help humans prevent free radical damage in various cells.

Due to its antioxidant properties and essential fatty acids, pomegranate can be found in natural beauty projects to slow signs of premature aging.

Studies have shown that pomegranate bark extract serves as an anti-inflammatory and that it is more powerful than ellagic acid (its primary component) alone.

The oil of pomegranate seeds has proven effective in combating inflammatory bowel disease (IBD) by supporting the immune response of the intestines.

A 2017 review in the journal Molecles showed that pomegranate exhibits strong antioxidant activity and is an abundant source of anthocyanins, ellagitannins, and hydrolyzable tannins.

Power molecules can help prevent cancer by blocking some biochemical pathways that might lead to future cancer.

A 2017 study looked at pomegranate for patients with heart disease with blocked arteries and a painful condition called angina pectoris.

Pomegranate juice caused noticeable reductions in the intensity, occurrence, and duration of angina pectoris in patients with unstable angina (pain that comes on even when trying to rest).

Consistently, the test subjects had significantly lower levels of blood markers that show that the heart is in distress. The results of this study suggest the protective properties of pomegranate juice against myocardial ischemia and reperfusion injury.

There is some evidence to suggest that pomegranates may help improve dental health by reducing tooth decay and inflammation of the gums.

Pomegranate fruit can be eaten, though only the seed sacs are usually consumed. Pomegranate juice is commonly available at grocery and health food stores. Dried pomegranate can also be found in tea blends and capsule form.

There is no standardized dosage for pomegranate. Studies on pomegranate juice to treat high blood pressure using a dose of just over 11 mL per day.

Pomegranate supplements recommend a dose of between 250 and 10,00 milligrams per day.

The potential long-term side effects of pomegranate consumption have not been studied. However, due to the tannin content in all parts of the plant, it is safest to stick within labeled daily recommendations or consult with a physician on appropriate ongoing dosage.

Have you found this article helpful? Please share it with your friends!