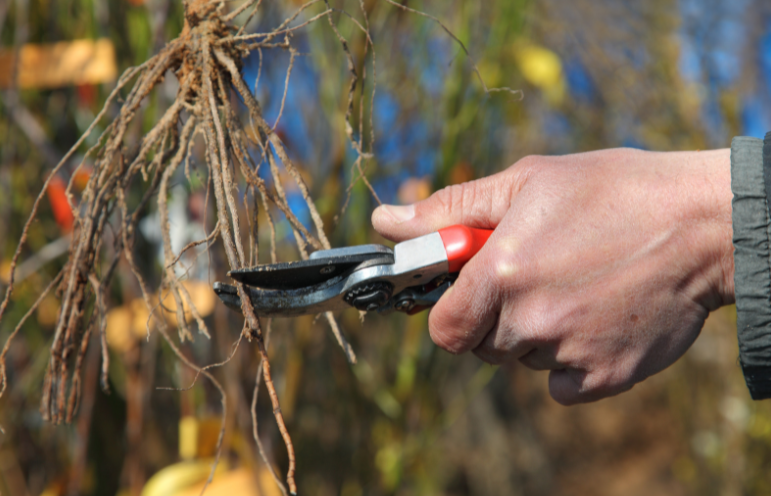 Root pruning is a technique that has fallen out of favor and is rarely seen today. However, when done correctly, it is incredibly effective. It is a technique for exposing and removing roots from a living plant to govern its growth or prepare it for relocation.

Root pruning is effective because there must be a balance between the plant’s root system and the upper part – the shoots and sterns. For the plant to grow, the chemicals that occur in each must be in balance.

As a result of removing sections of the root, the manufacture and supply of these chemicals (cytokinins) is limited. This, in turn, limits the chemicals (auxins, which are responsible for the development and extension of stems and branches.

Pruning Isn’t The Only Way To Go

Most gardeners believe that the only way to slow the growth rate of a tree or shrub is to regularly reduce the amount of shoot growth (pruning) to keep the plant in check and prevent it from getting overly large.

There are, however, other alternatives. Bark ringing is a technique used to restrict sap flow which can have a notable impact on slowing the growth of a woody plant’s shoots.

A plant’s root pruning works on a tree or large shrub because the plant’s natural reaction is to heal the wounds and encourage new roots to form behind the pruning cuts. While this process is underway, the plant prioritizes these areas over other parts of the plant, which means less energy is directed toward new shoot and stem growth, which reduces vigor.

Root pruning slows the growth rate of the plant’s top and benefits the root system by improving it, with more extensive roots being reduced in length and many new smaller roots forming, resulting in a more fibrous root system that can benefit the plant as a whole.

This is the equivalent of containerizing the plant if you intend to move it. Creating a compact rootball can be lifted with less effort, less damage, and a better chance of establishing the plant in its new location.

Within The Drip Line

Any root pruning should be done inside the ‘drip line,’ which is the boundary where the tree’s canopy ends. This is the area of soil with the greatest concentration of feeding roots.

These roots are in charge of collecting nutrients and moisture to keep the plant supplied with everything it requires from below for growth, so they should be left as intact as possible.

The technique should ideally be performed in early to mid•spring before the main growth spurt begins.

Techniques for the elderly Root pruning can be accomplished with younger trees by pushing a spade vertically into the soil to sever the roots, but this method does not work well with older trees, where the roots are often too thick to cut with a spade.

So a trench must be dug to expose the roots of older trees. With exceptionally well-kept trees.

It is preferable to spread the root pruning over several years, pruning a section each year until the entire root is pruned.