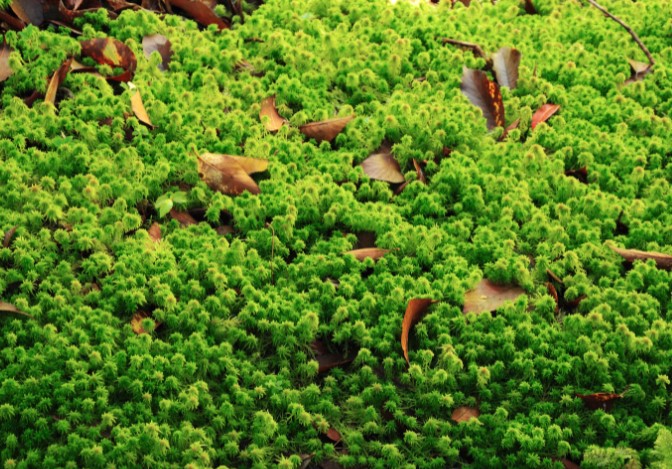 The many species of sphagnum moss belong to an ancient group of plants called the Bryophytes. This group lacks tubes to conduct water and reproduces by releasing simple cells called spores rather than multicellular seeds like most other plants.

Sphagnum mosses have some unique abilities making them a critical species in the lives of many shallow ponds/bogs. Some species can both float on the surface of the water and manufacture acids in their cells.

These acids acidify the water making life difficult for bacteria and other decomposers. Layers of dead moss are pushed under the floating layer and are slow to decompose due to phenolic chemicals within the cell walls and the acidity of the water.

This layer of dead moss eventually reaches the bottom of the pond. Past many hundreds or even thousands of years, a delicate spongy hummock is produced where there used to be water.

Other plants such as Labrador Tea can then occupy the new ground leading to a succession of plant species, including trees such as spruce and pine.

The dead moss layers in a bog are called peat moss. Peat moss has many uses, including gardening, insulation, a medium for growing edible mushrooms, and antibiotic filling for wound dressings. Unfortunately, it is a non-renewable resource when used in this way.

To culture sphagnum moss, research efforts are underway so industrial operations can grow back the moss they remove.

Please be gentle as you enjoy the bog. It is a living work in progress.

Is Sphagnum Moss the same as Peat Moss?

Sphagnum moss has over 350 species, but most of the varieties harvested for sphagnum moss products grow in northern hemisphere wetlands., primarily in Canada, Michigan, Ireland, and Scotland.

So, what exactly is sphagnum peat moss?

The dead, decayed plant matter of sphagnum moss is what settles at the bottom of sphagnum bogs.

Many sphagnum bogs harvested for commercially sold sphagnum peat moss have accumulated in the bog bottom for thousands of years.

Because these are natural bogs, the decayed matter known as peat moss isn’t always sphagnum moss.

Organic matter from other plants, animals, or insects may be present. When harvested, however, peat moss or sphagnum peat moss is dead and decayed.

Is sphagnum moss similar to peat moss? Well, sort of.

The living plant that grows on the bog’s surface is sphagnum moss. It is harvested alive and then dried for commercial use.

Typically, the living sphagnum moss is harvested, followed by the swamp being drained and the dead/decayed peat moss beneath being harvested. So, peat moss is the stuff on the bottom of the dried swamp.

Sphagnum peat moss is commonly dehydrated and sanitized after harvest. It is a light brown color and has a thin, dry structure.

Sphagnum peat moss is generally marketed in compressed bundles or sacks. It is an extremely popular soil amendment because of its capacity to support sandy soil, hold humidity and help clay soil slacken up and drain thoroughly.

Because it has a naturally low pH of about 4.0, it is also an outstanding soil amendment for acid-loving plants or extremely alkaline fields.

Peat moss is more lightweight, simple to work with, and cheap. Sphagnum moss is marketed in craft stores or nursery centers.

It is used to line baskets for plants and help retain soil moisture. It is generally sold in its natural stringy consistency but is also sold minced up.

It consists of shades of green, silvery, or brown. It is employed for a range of projects that involve a natural flair in crafts. Sphagnum moss is marketed commercially in smaller bags.

BRYOPHYTES can be found on most urban, rural, mountainous surfaces and the coast. Although most people have often passed by or have been local to them, many would not necessarily be aware that they are Bryophytes.

There are over 1,000 species of Bryophytes in the UK, and many are common, although there are some rare.

A quick check of a patio, wall, lawn, tree, roof, and rockery will almost certainly give sight of a Bryophyte. They are non-vascular plants generically known as mosses.

In contrast to vascular plants and trees, which have a circulatory system with the roots absorbing water circulated the plant body, Bryophytes do not have this ability. Still, they have conductive tissues for the ingestion of water and nutrients.

Another difference to vascular plants is that they do not produce flowers and seeds and, as such, no pollen or nectar.

Instead, they produce large quantities of spores. Although they have a reliance on moisture to survive and reproduce, they do have the ability to survive prolonged dry or drought periods. They can become almost entirely desiccated and shriveled.

Once exposed to water again, they can reabsorb moisture and completely recover.
Bryophytes are divided into three divisions; Mosses (Bryophyta), Liverworts (Marchantiophyta), and Hornworts (Anthocerotophyta).

There exist around 760 species of moss, 300 species of liverwort, and four species to be found in the UK.

They have essential roles are sensitive to both air and water quality, and are critical points of the “health” of our environment and ecosystems.

Bog mosses (Sphagnum) play a crucial role in our endangered peatland due to their ability to hold onto water, as well as provide essential habitat for other plants and animals.

Sphagnum mosses are described as a “keystone species” of peatlands and are critical to restoring bogs or fens.

A keystone species has an extremely high impact on a specific ecosystem about its population and is critical to the overall structure and function. They impact other types of plants and animals within the ecosystem.

In the lack of a keystone species, many ecosystems would fail.

There are 34 species of similar-looking sphagnum mosses in the UK and are usually grouped as “Sphagnum” for easy description.

They are exceedingly small and grow closer together, forming spongy carpets, and hummocks are made when the mosses grow to make large mounds up to a meter high.

Sphagnums range in color from red and pink to orange and green and form the amazingly beautiful multi-colored, ‘living carpets’ in wet places like peat bogs, marshland, heath, and moorland.

They also hold an essential role in creating and continuing peat bogs. They hold water long after the surrounding soil has dried out, providing essential nutrients.

This helps prevent the decay of dead plant material and this organic matter that gets compressed over hundreds of years to form peat – locking away carbon that would otherwise add to the impacts of climate change.

Sphagnum peat moss is a versatile organic material that will retain 12 to 20 times its weight in water. It has a predictable pH level of about 3.5 to 4.5. It will bind sandy soil so that water and nutrients are held at the root level, where they are needed.

It will aerate clay soils so that these same ingredients can get through to root level. It is soft, lightweight, odorless, and free of harmful chemicals and insects.

Sphagnum peat decomposes much slower than other peats and thus works in the soil longer. It offers more pore space or room for root growth.

It hasn’t reached as advanced a stage of decomposition as peat humus, reed, or sedge, which means it retains its form and functions longer as a soil conditioner.

Canada produces mainly sphagnum peat, which is used in horticulture and agriculture.

Recently, I visited several central peat bogs in Quebec, vast stretches of brown deposits of decayed vegetation formed over centuries in wet places. Today, harvesting, or mining, is a far cry from the days of hand-cutting blocks.

Now, harrows like those used on farms are run over the spongy surface, loosening an inch or two of the sphagnum. Tremendous vacuum cleaners drawn by tractors suck up the loosened peat and drop it into piles for drying.