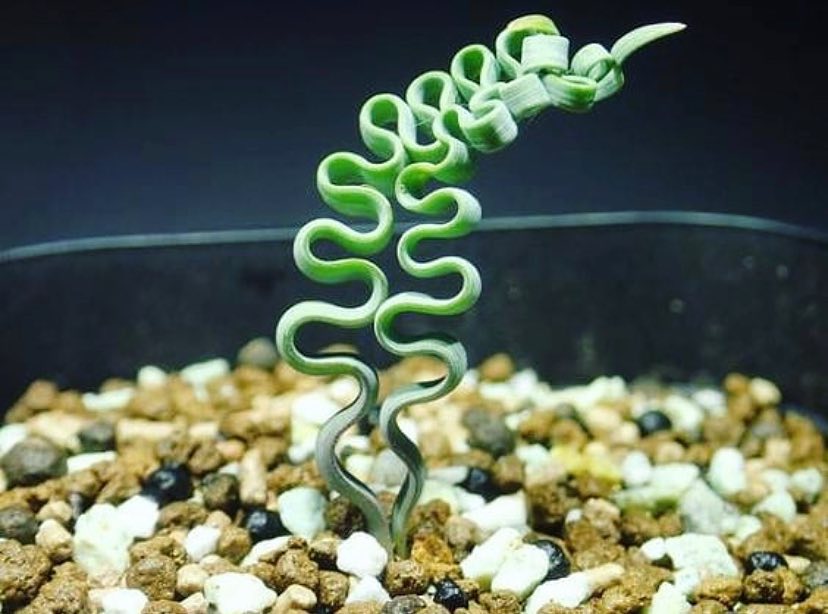 What is a Trachyandra? There are few species of this plant found throughout South Africa and Madagascar.

The following article contains Trachyandra plant info about different species and tips on growing Trachyandra succulents – if you’re fortunate enough to find one.

Trachyandra is a genus of plants similar to Albuca. The majority of the species are from the Western Cape of Africa.

They are tuberous or rhizomatous perennials. The leaves are fleshy (succulent) and sometimes haired. Many Trachyandra plants are small and shrub-like with fleeting (each bloom lasts for less than a day) white star-shaped flowers.

The tuberous perennial Trachyandra falcata can be found along the western coast of South Africa.

It is also known as “veldkool,” meaning field cabbage, as the flower spikes are eaten as a vegetable by the region’s indigenous people.

T. falcata has broad sickle-shaped, leathery leaves with erect, sturdy flower stalks protruding from the stem base. The white blooms are blushed, a faint rose hue with a distinctive brown line running the length of the flower.

Other species include Trachyandra hirsutiflora and Trachyandra saltii. T. hirsuitiflora can be found along the sand flats and lower elevations of the Western Cape of South Africa.

It is a rhizomatous-perennial with a linear habit that grows to about 24 inches (61 cm.) tall. It blooms in late winter to spring with an excess of white to grey flowers. T. saltii is found along with the grasslands of southern Africa.

It may reach a height of around 20 inches (51 cm.) and has a grass-like habit with a single stem and white flowers that bloom in the afternoon and close at dusk.

Another species of this plant is Trachyandra tortilis. T. tortilis has a fantastic habit. It grows from a bulb and is found along the Northern and Western Cape of South Africa in well-drained sandy or rocky soil.

Unlike the erect leaves of other varieties of this plant, T. tortilis has ribbon-like leaves that fold and coil, varying from plant to plant. It grows up to 10 inches (25 cm.) in height with three to six leaves that get to about four inches (10 cm.) long.

Flowers of this plant species are pale pink striped with green and are borne on a multi-branched spike.

These plants are considered quite rare in cultivation, so if you happen to come across one, it could be an expensive addition to your exotic plant collection.

Also, these are winter growers, which means the plant will go dormant in summer, dying back for a month or so. During this time, you should only provide minimal water, maybe once or twice, and keep it in a warm, well-ventilated area.

Once temps begin to cool, the plant will start to regrow its leaves. Care is then a matter of providing plenty of sun.

Since these bulbs are prone to rot in overly moist conditions, suitable drainage is vital.

While Trachyandra will require regular watering every two weeks throughout its active growth from fall throughout spring, make sure to let the plant dry out between waterings.

A recent study of herbarium specimens has revealed the existence of several additional
undescribed species in the Succulent Karoo Biome, among which some species belong to
an informally named the ‘Trachyandra thyrsoidea group’.

This group includes eight species that are usually small in stature and less than 300 mm in height and have tuber- or bulb-like roots.

Many species have a layer of red or orange tissue in the outer cortex immediately beneath a hard, brown outer skin. The leaves of all species in the group are filiform to lanceolate.

The simple or short-branched racemes bear patent flowers with white or pinkish tepals with a conspicuous midrib and yellowish or greenish spots near the base.

This unknown species of Trachyandra sect. was discovered in a batch of cultivated
plants in a nursery in Oudtshoorn.

Their origin was near Laingsburg in the succulent Karoo area of South Africa.