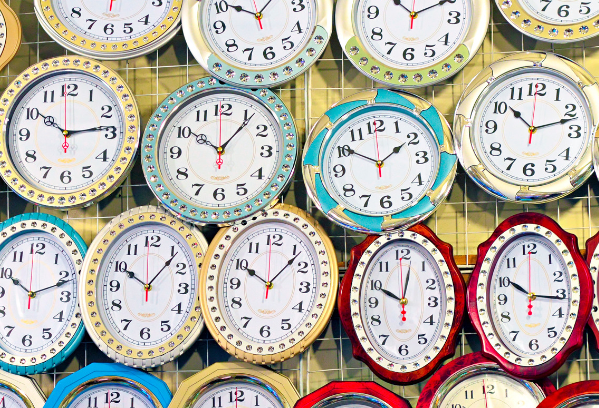 What Are Clock Hands

Have you ever thought about how clock hands can be represented differently?

To read an analog clock, turn your head in the direction the hands are pointing. The current hour is shown by the shortest hand, the current minute by the most extended hand, and the current second by the tiniest hand.

The hour hand completes two full rotations of the clock each day because the clock only has numbers up to twelve. First, from noon to midnight, and again from midnight until noon.

What Defines an Hour on a Clock?

The interval between two clock numerals represents an hour. A clock’s hour hand depicts the passage of an hour by moving from one number to the next.

Because the hour hand moves slowly, the minute hand completes one full clock rotation from twelve to twelve.

Clock movements can be fitted with several different types of hands:

Euroshaft: fits most German movements that have this shaft type

Microshaft (mini shaft): clocks have a skinny shaft and are generally used for carriage clocks.

Since ancient times, clocks and human civilization have been intertwined; nonetheless, today, the value of clocks is only realized when one is running late for work.

Humans have been keeping track of time for countless years using various tools, such as water clocks, candle clocks, hourglasses, and sundials, to track the sun’s movements.

Since 2,000 B.C., we have used a base-60 time system, which is a clock with 60 minutes and 60 seconds increments. And is from prehistoric Sumeria.

Before the pendulum clock was created in 1656, the first mechanical chronographs were created in Europe, perhaps at the beginning of the 14th century.

The sophisticated clocks we have today result from several factors coming together throughout time.

These elements have a lengthy history, as do the cultures that contributed to their development. We can see the history of Wall Clocks with cuckoo clock hands, temporary fancy clock hands, and even clocks without hands.

The earliest sundials known from archaeological records are shadow clocks (1500 BC or BCE) used in ancient Egyptian and Babylonian astronomy.

The Romans adopted the Greek sundials, with the first record of a sundial in Rome being 293 BC. Plautus, a playwright, complained in one of his plays about the day being ‘chopped into pieces by these sundials!

In 10 BC, the ancient Romans built a giant sundial called the Solarium Augusti.

It is an obelisk, a very tall stone pillar that has an extensive base and gets thinner toward the top.

Another old timepiece that was used all over the world, from China to Mesopotamia and England, was the candle clock.

The hourglass (commonly used in Europe) was created a little after time sticks, invented in areas like India and Tibet.

Around the 10th century, the Chinese were able to create a mercury-based timekeeper, and in the 11th century Iran, mechanical clocks made their first appearance.

Europe saw the emergence of the first actual mechanical clocks in the 14th century.

These early mechanical clocks used a foliot or balance wheel and a verge escapement mechanism for precise timekeeping.

Hefty weights drove the hands of the clock in the original prototypes, which were genuinely enormous machines.

They could maintain relatively accurate time for extended periods and be frequently constructed in large buildings.

Some of them can still be discovered today, with specimens from the 14th century found in England and France.

Like Prague, many would prove to be beautiful pieces of art.

Mechanical clocks would swiftly establish their value as highly dependable (for the time) and served as the standard timekeeper until Christiaan Huygens created the pendulum clock in the 17th century.

Pendulums could be used to help maintain clocks accurately as long as the pendulum was swinging, as Galileo would demonstrate a bit earlier in 1581.

The precision of timekeeping devices was significantly increased by the balanced spring’s development and modifications to clock balance wheels in the middle of the 17th century.

Despite these developments, pendulum clocks continued to be among the most precise clock designs well into the 20th century.

This was true until the post-World War II invention of quartz oscillators and atomic clocks. A quartz crystal-controlled electronic oscillator is utilized in quartz clocks.

The most common mineral on earth is quartz. The exact mechanism is used by all quartz watches, including digital ones.

They keep time using the crystal but don’t have the exact ticking mechanism as a quartz watch with a dial and hands.

What is the mechanism of a quartz clock?

Each quartz timepiece or watch has a tiny quartz component inside that is typically designed like a tuning fork for musicians.

The fork’s prongs vibrate 32,768 times per second due to power being sent to the quartz crystal by a battery inside a quartz clock or watch.

The circuit produces one electronic pulse every 32,768 vibrations (or one per second), which counts the vibrations.

The second hand of the clock, along with the minute and hour hands, move clockwise around the dial due to these pulses propelling the gear wheels forward. Clocks made of quartz are reliable and precise.

There aren’t many differences in the way that digital watches work. Similar to an analog clock, a standard quartz clock counts 32,768 quartz crystal vibrations every second and then pulses power to the counter for one second.

Using AC power with a steady 60-hertz oscillation is an additional option for powering a digital clock.

Similar to how the quartz crystal plane vibrates, this constant oscillation may give the quartz clock an incredibly accurate timekeeping mechanism.

So, digital or analog timepieces, which is more accurate?

To accomplish this, the only way is to compare the accuracy of a quartz digital watch to an analog mechanical watch.

The digital output will probably be more accurate because quartz technology is the most precise movement.

Here Are The 10 Most Popular Wall Clocks On Amazon