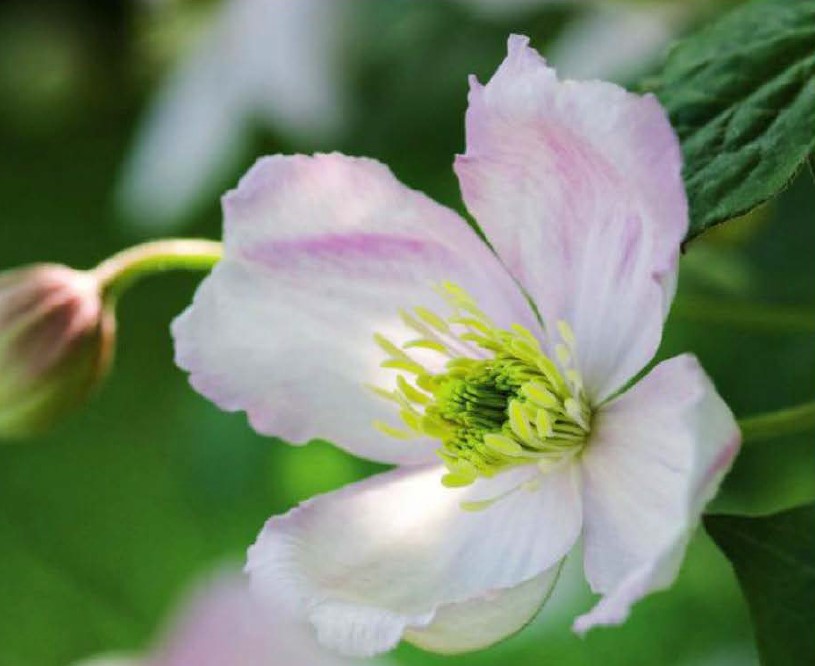 Clematis Montana requires little pruning. If you do need to prune, it must take place immediately after flowering.

Don’t prune as part of your autumn tidy-up, or the following year’s flowers will be lost.

• Where space is limited, you can cut back to within 1 m immediately after flowering. Feed and water, and it will begin to produce new growth.

• Alternatively, cut plants back each year to a framework of older stems, leaving the plant denuded of foliage.

This restricts the growth and also increases the size of the flowers that follow.

• Mature specimens can be rejuvenated by cutting out one in three stems immediately after flowering. This will lead to all new growth within three years.

Clematis Montana, although familiar, can never be described as common. It has aristocratic connections, having been introduced in the early 1800s and made popular by Lady Sarah Amherst, the wife of William Pitt Amherst, Governor-General of India.

Lady Amherst, a plant enthusiast. Collected and sent home seeds, notably after a trip to the remote hill station of Simla in the Himalayas in 1826.

Among her treasures were Clematis Montana, a rampant twining beauty with white, vanilla-scented flowers up to 8cm across.

Widespread in the Himalayas and the mountains of western and central China, this clematis
also caught Ernest Wilson‘s eye during his expeditions around the turn of the 20th century.

He was one of the greatest plant collectors of all time and introduced two varieties from China: Clematis Montana var. Rubens,

with purple-timed leaves and scented, rose mauve flowers, which is harder than the species; and C. Montana var. wilsonii,

whose small white flowers, with the fragrance of hot chocolate, appear from mid to late June. C. Montana var. Grandiflora was introduced to Britain from India.

It flowered here for the first time in 1844 and has large, white. Delicately scented flowers,
to 10cm across. All make wonderful garden plants.

Later cultivars and hybrids, including Montana Group. Accentuated the nuances of flower, form, and color of the species. Simply adding to their charm.

Most bloom from late April in the south or May further north, the flowers displaying variations on a mauve pink theme, subtly changing as they fade.

Some provide a dense display, creating fabulous curtains of flowers. There are pleasing variations in the color of their delicate foliage and attractive buds, with leaves and stems ranging from green to purple and bronze.

A popular variety is the richly fragrant ‘Elizabeth,’ with light pink flowers that become white in the shade.

‘Tetrarose’ is also widely grown. offering deep rosy-mauve blooms and a spicy scent in May and June.

A favorite double-flowered variety is ‘Broughton Star’ with its beautiful pink blooms.

However, others deserve to be more widely grown.

and ‘Freda,’ which has deep cherry-pink flowers and centers fading to pale pink, with bronzy foliage.

It only reaches 5m and is perfect for smaller gardens. Montana clematis self-seed freely, and when gardening designer John Williams found a seedling in his garden with small,

deep-pink flowers and a chocolatey fragrance, he combined the county of his birth and the
name of his mother to bring us ‘Warwickshire Rose.’

Another introduction, ‘Miss Christine’, with small glossy white, scented flowers, each with a purple-pink edge on the underside, reaches 7m height and spread.

‘Crinkle,’ which Flowers in April and May with deep pink Flowers, undulating margins, and purple young growth;

With a height and spread ranging from 5-lOm, Clematis Montana and its relatives are perfect fillers for large spaces, but the support must cope with their size and vigor.

Hard pruning is possible but rather limits their potential. As twining, scrambling plants, they attach themselves with leafstalk tendrils, so they need to be trained to reach their support.

Grow them up to wires or trellis or for covering unsightly chain-link fencing. They also make attractive drapes for garage roofs and outbuildings.

Before growing them into mature trees, ensure that the boughs and roots are robust enough to support the weight and pressure from a mass of foliage and stems that have a similar effect to a large sail.

Exercise caution when growing them over a roar, or the front or a house, too. Left unchecked, they could lift tiles, scramble into the roof, and cause considerable damage.

doesn’t need rich soil but repays feeding in late autumn with bonemeal and early spring
with a high potash feed.

They prefer their roots to be shaded, and their flowers in the sun, so either underplant
with low shrubs or plants on the shaded side of the host wall or tree.

They can also do well in a north-facing position, where the flowers last longer, though, in exposed positions, spring frosts can damage buds and young shoots.

It’s also worth remembering that a warm, sunny position intensifies the perfume or fragrant forms.

When seen in their full glory, there can be no doubt that Lady Amherst’s passion led to us welcoming a host of aristocrats into the garden.