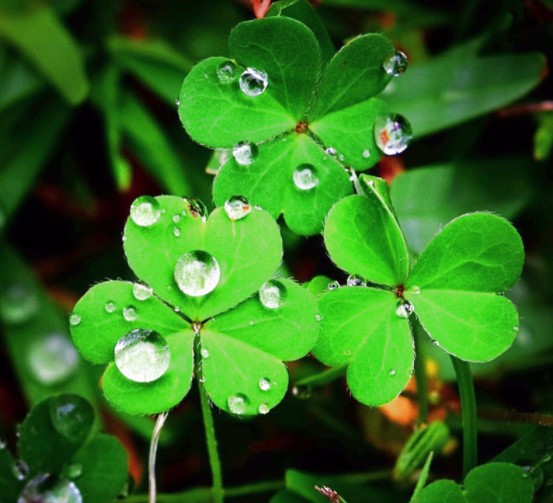 The 4 leaf clover…there is so much to say about this oddity of nature. While some people spend their entire lives searching for the lucky 4 leaf clover, others (like my children) can find them every day.

What are 4 leaf clover, clovers, and why are they so rare? How can you find them?

Before you start your hunt for the elusive clover specimen, it is helpful to know a bit about four-leaf Clovers. It is believed to bring good fortune to the person who finds it (Yeah, right).

They are everywhere I look, and I would not be able to find them if it wasn’t for my bad luck. You may not know this, but St. Patrick is said to have used the three-leaf clover as a method to explain the Holy Trinity to pagan Irish.

The fourth leaf is believed to represent God’s grace. Further information suggests that the four clover leaves represent faith, hope, and love. In the Middle Ages, four-leaf clover was thought to bring good fortune and the ability to see fairies.

White clover (Trifolium Repens) is the only variety that has the 4 leaf clover. The one you know. It’s a common weed that grows in yards all over the place and is difficult to manage once it takes root.

According to English folklore, dreams of a clover can signify a happy marriage full of wealth and prosperity. However, there is a warning for those who might find five-leaf clover. If it is not given away quickly, it will be considered unlucky.

Another way to think is that the clover can possess magical properties because it takes the shape of a cross that protects the owner from evil spirits.

The fascinating part of the story is that clover was supposed to represent Ireland. This may have created a legend that St. Patrick used the clover’s triple leaf to explain Trinity to Celts.

Both the Celts as well as the Druids believed that clover was a sign of good and bad. Their traditions were passed down to the Christians of Europe, who wrote this poem about a clover that had four leaves.

A four-leaf clover contains one leaf for fame and one for wealth.

Clover is part of the pea family. This remarkable group includes plants that have the ability to transform nitrogen from the air into something that may be taken up and used by roots.

Clovers are used in green manure crops. This is an old-fashioned fertilizer that farmers used but which many gardeners now use. To replenish the nitrogen, the clover is buried in the soil in spring.

This group includes more than 300 species, all of which are part of the genus Trifolium. Trifolium patience, the red clover, is probably the most well-known. Although it is not native to this country, it has been a natural part of our landscape.

It is the clover for pastures, and it is also used to make hay. It is known to have a remarkable root system, at least two feet in depth. The microscopic feeder roots can also be pulled out when plants are taken from the ground.

Some gardeners love clover, while others don’t, as they fear bees flying around, especially in areas with young children. Trifolium repens (or white clover) is the clover. It has also been naturalized.

Clover plants are often grown in winter to be sold as shamrocks on March 17, St. Patrick’s Day. Anyone can grow any of the easy-to cultivate species, especially the Dutch or white clover, due to its trailing roots and tough stamina.

To have full-sized plants, it is important to start the plants at least six weeks before the holiday.

While most people know the clover flower in soft pink or white, it also has bright red and yellow flowers.

Many of these ornamental plants are highly sought-after by gardeners who love unusual plants. Some are nearly weedy and can be found almost anywhere.

Ornamental species are those that thrive in sunny areas and well-drained soil. They are hardy and can be cared for with little effort. Clovers are plants that should be studied.