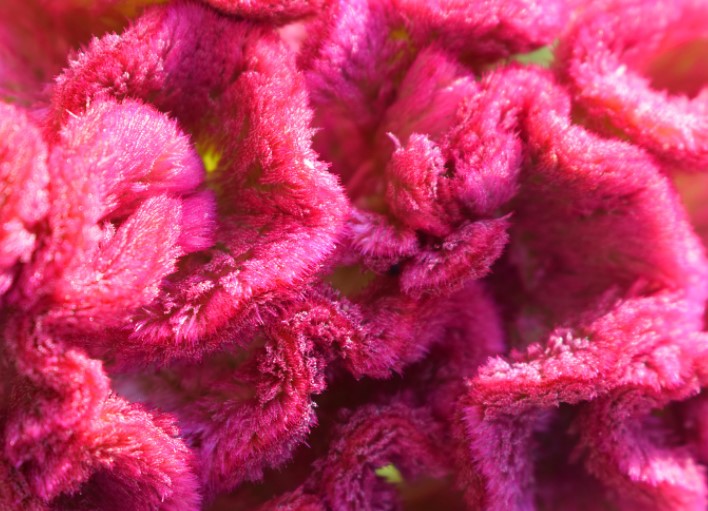 Celosias make a striking addition to any garden. The flower colours of celosias are stunning, no matter what variety you choose.

They practically glow in the garden even when it is raining. The most common colours are red, yellow and cream, orange, pink, deep magenta rose and cream.

Celosias can be grown from seeds and are easily available in nurseries, garden centres, and retail stores in spring. Celosias are versatile and can grow in almost any soil, even clay.

Celosia can withstand heat and drought despite summer weather that is as unpredictable as it has been during the last years.

Named after the Greek word for “burning”, it is an apt description of the appearance of celosias, particularly the yellow, red and orange plumed varieties that resemble a flame.

The crested celosia was a smaller flowering plant than the modern breed, and its fan-like, small, wavy flowers resembled rooster red combs. This is why it is often called cockscomb.

Celosias were a Victorian flower symbol for humour, warmth, and silliness. Their unusual appearance and cheerful colours can bring a smile to anyone’s face. They are so soft!

Cristata and cockscomb types feel almost like velvet along the sides of the spike.
Celosia plumosa is actually tens of smaller, feathery-like spikes that are produced in a Christmas tree-like arrangement.

These plumes of feathers are nearly indestructible. Even in severe storms, they retain their original shape and texture. Celosias, which are warm-weather plants, take approximately 90 days to flower once they have been planted.

They aren’t happy unless the soil temperature is below 15 degrees Celsius, just like beans.
Start the seeds indoors at least four to six weeks before the last frost date.

Celosias don’t like their roots being disturbed so sow three to four seeds 0.5 cm deep in a lightly moistened, sterilized seed-starting mixture in peat pots. Wrap the pots in plastic wrapping, and place them in a warm (25- 25°C) area until they germinate.

This may take between 10 to 15 days. Allow the plants to breathe by removing the plastic wrap each day. To keep the potting mixture evenly moist, use room temperature water.
After the seeds have germinated, you can move them into the sunlight.

You can use fluorescent lights or a sunny south-facing window. Move the lights six inches from the top of the plants as the plants grow. Once the plants have two sets, remove any plant that is not strong.

Start hardening the plants when nighttime temperatures rise above 13 degrees Celsius. Gradually, introduce them outdoors. For a portion of each day, leave them outside in a protected area.

Begin with just four hours, and gradually increase the amount of time spent outdoors to two hours. They should be able to stay out for at least eight hours each night by the eighth day.

Avoid planting celosias in solid rows unless you intend to grow them in a cutting garden. The plants should be spaced between 25-40 cm apart. Allowing plants to breathe allows for healthy growth and air circulation. Make sure to water well.

Celosias can be planted in containers either as a single plant or other plants that prefer the same sun. The Kimono (25 cm) and Ice Cream (25-30 centimetres) offer shorter plume forms with a wide range of colours, from hot pastels to cool shades.

I prefer to use wheat celosias (Celosia Spicata) in a border setting.

Flamingo Feather (45 cm) is a soft pink-white form used with all of the shorter ornamental grasses.

How To Plant Celosia From Seed

If you wish to seed celosia you should allow 90 days from seeding to flowering.
Prepare your seed tray using a mica peat mix and cover the seeds with eight to 10 millimetres of the mix.

Soak the tray with warm water from below. Cover the tray loosely with plastic wrap. Seeds germinate best when they have a constant temperature of 20 to 25 C so use a heat source under the tray. If you wish to plant straight in the garden wait until the soil temperature is at least 15 C.

Seedling roots do not like to be disturbed so be careful when potting up seedlings or transplanting them into the garden. Young plants can be moved outside when the nighttime temperature reaches 12 or 13 degrees C.

Put the plants out for only a couple of hours the first day and gradually extend the time as the plants harden off.

Small plants can be spaced at 25 centimetres and large plants at 40 centimetres to prevent crowding. The taller cockscomb varieties used in containers may have to be staked when the flowers are fully formed. The plants are quite a disease free and perform well if grown in full sun.

The versatile blooms can be grown as bedding plants, for cut flowers or for dried flowers. The plumed varieties are the easiest to dry, and the mature flowers can be hung upside down in a well-ventilated space until completely dry.

They will add eye-catching colour and last for months in dried arrangements.

It is most probably too late this year to seed celosia but you might want to pick up a couple of plants at the nursery and test them in your garden.