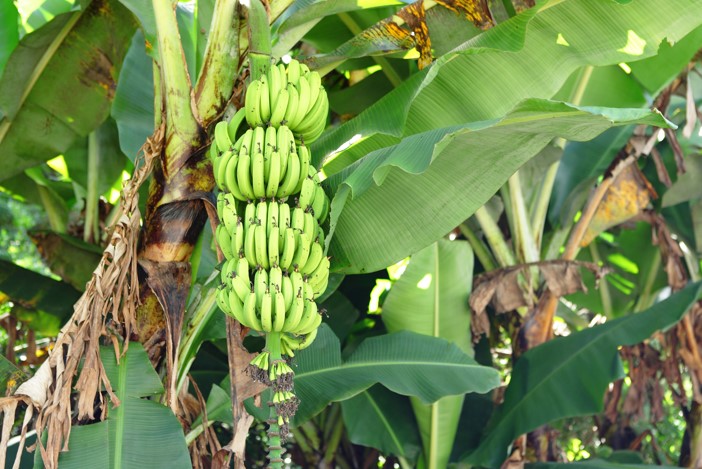 Often wrongly depicted as a banana tree, the banana is in fact a giant herb with a trunk (or more than one), springing from an underground stem (corm) that forms a false trunk three to six meters tall.

This trunk is made up of sheath-like leaves with a rosette of 10-20 oblong leaves. Sometimes the leaves can measure 3-3.5 m. in length and up to 60 cm. across.

If you are ever stranded on a desert island, just pray it has a banana tree, bearer of one of the world’s most perfect fruits.

In Israel, bananas grow well in the warmer parts of the country but sadly refuse to grow in areas where winters are cold. Growing these tender plants in Jerusalem is my way of showing the daring streak that I feel lurks in every gardener.

We are aware that we are sticking our necks out, but the temptation to surround ourselves with plants that really belong far away in the tropics is irresistible.

Sometimes, with the assistance of a kind weatherman, we manage to get them through the winter and can pat ourselves on the back.

In warmer parts of the country, you should have no trouble growing a banana plant. In cooler spots, you could try growing it as a house plant and putting it outside in the summer.
You are probably saying: “Banana trees are enormous – who has room for one of them?”

True, bananas are fast growers; a new leaf can grow at the rate of 15 cm. a day and more if conditions are optimum, and can bear flowers and fruit within a year.

Banana plants, with their huge tropical-looking leaves, are striking in appearance, and even if they never produce fruit are well worth including in the home or garden. Most fully grown banana plants are in fact very tall and therefore unsuitable as indoor plants.

With gardens shrinking and interest growing, breeders have come up with the dwarf banana plant, which has attracted a lot of interest.

If you cannot find dwarf plants there is another alternative. When a banana plant reaches 1.5 to 2 meters it will probably begin to send out suckers.

These can be clipped off, rooted in water, and used for decoration. The mother plant can be placed outside to continue growing; the smaller cuttings can be rooted and potted, also for indoor decoration.

The growth pattern is very similar to border perennials in the garden. Soon after the plant bears flowers and/or fruit, the stem dies. But as with perennial plants, this is not the end.

The dying stem is replaced by others arising from the underground stem and the life of this clump of leaves can continue for many years.

Certain banana trees continue producing for up to 100 years, although nowadays most banana plantations renew their stock every five to 10 years.

The banana has been domesticated a long time before recorded history, even predating the cultivation of rice. Bananas reached Africa during ancient times.

Their origins are believed to be in the rain forests of East Asia and the Indo-Pacific areas, from where they were transported all over the globe.

Alexander the Great is credited with introducing bananas to the Western world from India.
The eating of bananas is mentioned in early Greek, Latin, and Arab writings.

Where did the name banana originate? Its Guinean name is banema, which during the 17th century became banana in English. The Latin name for the genus is Musa, in Hebrew, it is banana, though the first Jewish settlers called it moos, after the Arabic.

Banana plants were brought from Africa during the period 63-14 BCE.

Antonius Musa was the private physician of the Roman emperor Octavius Augustus, who was credited with bringing the banana into cultivation.

In the early 15th century Portuguese sailors brought bananas to Europe from West Africa. In fact, there is a port on the Atlantic coast in southwestern Zaire that was named Banana in the 19th century. It is one of the country’s older towns and was known as a center for trading, mainly in slaves.

Upon the discovery of America the banana was brought from the Canary Islands to the New World, where it was first grown in Hispaniola, then introduced to other islands and the mainland.

Musa is a relatively small genus of about 50 species (Musaceae). It includes the bird of paradise (Strelitzia reginae), but its main claim to fame is the banana. The many varieties of edible bananas were developed by crossing and recrossing two wild species, M. acuminata (meaning long-pointed or tapering – not referring to the fruit, but to the flowers giving birth to the fruit), and M. balbisiana.

The fruits of another species, M. paradisiaca, are known as plantains or cooking bananas, which are eaten fried or boiled.

Cultivation increased until the banana became a staple foodstuff in many regions. In the 19th century, it began to surface in the markets of the US.

During the 20th century, more than 300 new varieties of bananas were developed, differing slightly in such characteristics as plant height, disease resistance, color, and type of fruit.

There is a lot of fuss because of diverse names applied to the same variety in different parts of the world.

Today, bananas are the fourth-most important fruit crop in the world, after grapes, citrus and apples. Throughout the tropics, almost 100 million tons of bananas are produced annually. The largest exporter is Ecuador.

Fruit developing out of the female flowers are parthenocarpic (meaning that they evolve without usual pollination) and hence there are no seeds in most cultivated forms of banana. Sure, there are exceptions, but the commonly available varieties rarely produce any seed.

The plants are reproduced vegetatively from shoots (known as suckers) to replace themselves after the plant fruits and dies. The typical shoot has 33-37 leaves, and only then produces its flowers (inflorescence). Most of the time the suckers are exact duplicates of the parent.

The most amazing feature of the banana plant is that the flowering head grows up through the trunk once the plant has produced some number of leaves. It consists of groups of tubular, creamy-white flowers, each group of flowers being subtended by a large purple-red bract (a leaf-like structure) that sheds as the fruit develops.

Female flowers are created at the base of the flowering head, with male buds surrounded by a bract at the tip. This whole bract gets pulled down as the fruits develop. In tropical countries, this bract is eaten as a vegetable.

Bananas are high in energy, low in protein and fat, rich in vitamins B6, A, and C, and in potassium. Their ripe fruit contains as much as 22% carbohydrate, mainly as sugar. It is a useful food, good for those with digestive problems.

Bananas are higher in carbohydrates and fiber than potatoes: 26.1% of the banana is a carbohydrate, compared to 19.1% for the potato.

If you are growing in pots remember that bananas outgrow their pots very quickly.
Soil. Bananas like a rich, moist potting medium

When the plant is established and growing, water it frequently. But remember: If you leave its “feet” wet you will invite fungus and rotting of the roots. The soil should drain immediately, and the banana must never have soaked roots.

Try to keep the soil evenly moist. A plant up to two meters in a sunny window might transpire 4-8 liters of water a day, depending on the number of leaves it carries. Bananas outdoors will use almost twice that.

Try not to let the leaves wilt from lack of water. This is easily remedied with a good drenching, but it stresses the plant and could affect the size and quantity of the fruit.
Fertilizer

The plants should be fed when watered, except in winter. Artificial liquid fertilizers can be used when the plants are growing strongly but may cause damage if plants are in poor condition.

Dry air in homes is one of the leading causes of leaf deterioration (brown tips and edges). Other problems emanate from poor soil, over-watering or lack of water, sudden changes in growing conditions, or even over-feeding. Most losses are due to overwatering.

Since they do not generate seeds, bananas are propagated by means of “suckers” that develop from buds on the underground rhizome. Edible bananas, such as the “Dwarf Cavendish,” can be grown under glass.

A properly drained soil with an elevated organic matter content is ideal, and plenty of water should be provided throughout the growing season.

High atmospheric humidity is essential. Temperatures of at least 18C during winter nights and 24C during summer days are required.

The plant enjoys full sun, possibly with some shading in the summer to maintain the requisite high level of humidity.

The characteristic bunches of bananas are formed from double rows of female flowers. Each inflorescence produces 50-150 individual fruits or “fingers,” depending on the cultivar. These are grouped in clusters, or “hands” of 10- 20.

Under the heaviness of the fruit, the inflorescence bogs down. Some bunches have been known to top the scale at 65 kilos.

For marketing and shipping, the crop is cut unripe and ripened with ethylene gas. The main stem (pseudostem) will then die and a new sucker will take over.

Clipping the plant back to soil level after fruiting will encourage suckering.