Gardenfrontier
Home Gardening Caring for Your Yard Bee Garden Importance Plus 5 Awesome Strategies To Draw Bees Into Your...
Twitter29Facebook1PinterestSubscribeShare
30
SHARES 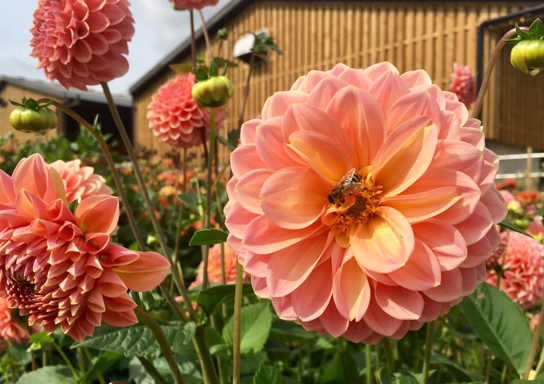 Having a Bee garden and bees around could appear to be a nuisance, but they’re vital to our lives as we live, So it’s not surprising that gardeners are keen to make their gardens more hive-friendly.

Here are five strategies to draw bees into your garden

By many opinions, the bees are nothing more than bothersome fuzzy insects, black and orange in the summer months. In reality, they’re much more than that and play a vital role in maintaining the earth.

While woods and trees are crucial to filter air, bees are vital to pollinate the food that we require to survive and pollinate many of the flowers and trees that create the habitat for animals.

You can often see them buzzing from flower to flower. It’s hard to imagine a world without bees, but it’s increasing the possibility.

How can you lure bees to your garden?

2. The time for flowering should vary from the beginning of Spring until the end of summer and into winter if possible.

3. Bumblebee species come with different length tongues, adapted to feed on other flowers. For instance, the one with the most extended tongue, Bombus Hortorum, prefers more rounded flowers such as foxgloves and honeysuckle.

4. In general, please stay clear of plants with multiple or double-petalled flowers since pollinators may find them difficult to reach. These types of flowers are often deficient in nectar and pollen.

5. Native species and wildflowers’ plants have evolved with native insects. Some uncommon species prefer native wildflowers. There are additional benefits of growing them. They are relatively simple to care for and are usually resistant to pests as well as other insects.

Certain shrubs and trees are also ideal for bee garden because they offer tons of flowers in one location. Pick the early and winter flowering tree species, such as wild cherry, apples, hazel, and willow.

Suppose you live in the U.K. The Woodland Trust has a range of native trees in The U.K. and Ireland. Avoid using pesticides. Pesticides and insecticides pose a threat for bees and your bee garden, as the name suggests.

Typical insecticides that contain neonicotinoids can kill bees that are around it exceptionally quickly. They’re still accepted for use in the garden and home and are available at many garden centers and DIY stores.

If you’re buying a pesticide or insecticide product, be sure to read the label before making use of products that kill the bees.

Create bee garden and also insect homes in your garden to create beautiful nesting spots for solitary and other insects.

Different species of bees have different needs for habitats. You can build your own bee garden house or purchase commercially-made bee houses. Set up beehives in a south-facing location, but avoid direct sunlight. Also, ensure that the entry point is downwards to prevent rain from getting into.

If you’re not able to allow your lawn to develop, think about making a cut that’s less frequently cut. This gives them a greater likelihood of blooming.

Importance Of Bees In Pollination

Pollinators affect about one-third of the global food supply, so news about falling honeybee populations has increased interest in protecting these essential insects.

Much of the attention surrounds Colony Collapse Disorder, which the U.S. Department of Agriculture defines as a mysterious ailment resulting in a dead honeybee colony without adult bees or dead bees but with a live queen and most of the time honey and immature bees still present.

The USDA’s Agriculture Research Service said that since the 1980s, honeybees have been under attack from new viruses and pests; there are fewer types of pollen and nectar sources, and pesticides may have sublethal effects. Figuring out ways to help honeybees may help bee populations in general.

Where to start ?. David Lowenstein, a doctoral student at the University of Illinois at Chicago who collects data on insect populations in urban neighborhoods, and Rich Ramsey, past president of the Illinois State Beekeepers Association, claim that the most important thing homeowners can do to help bee populations is to reduce their use of broad-spectrum insecticides.

“Any insecticide is not friendly to bees. Bees are bugs, and insecticide kills bugs. Whether it’s a lethal dose or not is a different story,” Ramsey said.

Ramsey said that one popular pesticide for home use is the chemical carbaryl, best known under the brand name Sevin, which is harmful to bees. Both Lowenstein and Ramsey said gardeners who feel they must use broad-spectrum pesticides should at least strive to spray in the early evening when bees aren’t active.

Ramsey said that a better choice is to use products containing Bacillus thuringiensis (also known as Bt), which doesn’t harm bees.

Many of the discussions about pesticides center on neonicotinoids, a group of chemicals that go into the plant and are present in pollen and nectar. They were created to reduce broad-spectrum pesticide use.

Germany and some other countries have banned using these chemicals, citing bee die-offs, but both Ramsey and Lowenstein said research about neonicotinoids is ongoing.

“The problem is it’s not clear how they are detrimental or if they are a detriment to bees. They’re not outright lethal. The concern is they may cause sublethal effects. … It’s still unknown if they’re as bad as they might be,” Lowenstein said.

What Plants To Have In Bee Garden

Plant right. Vary the plants you grow, having some with big blooms and some with tiny flowers. Many wild bees, such as sweat bees, are small, Lowenstein said, and they like to visit smaller flowers. Some bees only visit certain types of flowers like squash blooms or sunflowers. Also, make sure to have colors throughout the season.

Lowenstein said the worst plants homeowners can grow are begonias and petunias. “It’s the equivalent of wax fruit to a pollinator,” he said, and bees rarely visit them because they lack pollen and nectar.

Different flowers attract more and other types of bees. Lowenstein said his research shows ethnically diverse neighborhoods have more significant and more diverse bee populations, which he attributes to the people living there who plant flowers representing their cultures.

Bees appreciate a water source, so a birdbath with rocks in it to create a shallow pool will give them a place to drink. If the water source is maintained, bees will make it a habit to visit, Ramsey said, and it’s an excellent way to keep bees from hanging around swimming pools.

Get a hive. Bees are considered farm animals, Ramsey said, so even hobby beekeepers need to register with the state.

The initial equipment investment can run between $200 and $300, Ramsey said. Hobby beekeepers should get a two-story hive to start, plus protective gear like coveralls, a bee veil and hat, gloves, and a smoker to calm the bees.

An extractor is used to remove honey from the honeycomb. Bees can be ordered through the mail. Ramsey said that a package including a queen and a pound of worker bees is about $100 to $120. 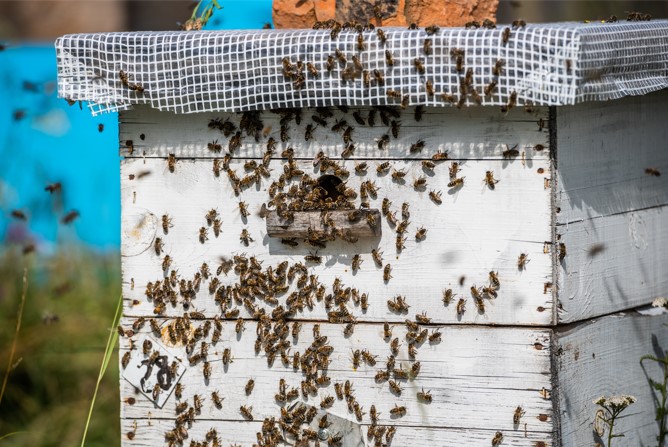 Once hives are established, by the second year, they can produce about 60 pounds of honey.

Talk to your neighbors if you get a hive. Dick Rooney, who has kept bees for about nine years at both his home and at an American Legion post, said he had to educate his neighbors in the beginning because they were uneasy about his backyard hive.

“A lot of people have a fear of bees, but they found out the bees don’t hurt anyone. You’re more likely to get stung by a wasp,” Rooney said, adding that his strawberry patch is right by the hive, and he and his granddaughter pick berries without being bothered.

Rooney said that hobby beekeepers could find help and information from associations like the American Beekeeping Federation or other groups.

Tea Mixture Recipe That Will Help Bees Over Winter

This tea mixture should be used only when the bees are in danger of starvation which in the Northeast U.S. typically occurs in Autumn or Winter (if the hive does not have enough honey stored away), in early Spring if the bees have used up most or all of their stored honey and consistently warm weather and accompanying blossoms have not arrived, or when a colony is shaken onto the foundation (such as when hiving a package of bees). There is no honey stored in the hive.

Unlike feeding plain sugar syrup or high fructose corn syrup, feeding this tea to the bees will not only help prevent starvation, but I believe it will help boost the colonies immune system.

Try to plan in late Summer and Autumn and avoid having to feed the bees during the dead of winter since the bees are not always able to get to the feed-in cold temperatures, and the added moisture from the tea may add significant stress to the hive.

Ingredients: All sugar and tea should be from a certified organic source whenever possible. If not organic, use pure cane sugar only to avoid putting genetically modified pesticides into your hive.

Note: If you decide to add honey to your bee tea, do so after the temperature has dropped to lukewarm and stir the honey in well. Be sure that your honey source is free from American Foulbrood disease.

Observe how fast the bees are consuming the tea. If they are not taking it down fairly rapidly (at least one pint every two to three days), they probably do not need it (or it may be too cold for the bees to feed, or the bees have a terrible case of Nosema).

Only feed the bees when they need it and will take it. The bees should not need to be fed if capped honey is stored in the hive and daytime.