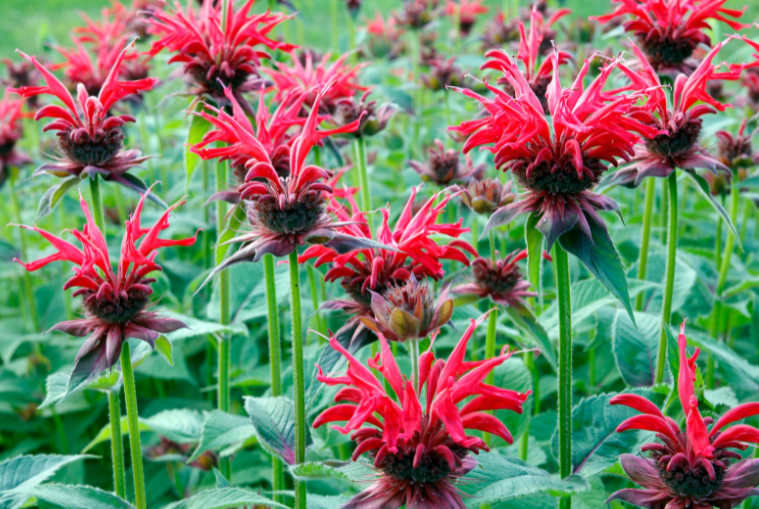 Monarda didyma, commonly known as Bee Balm is a showy and fragrant group of plants indigenous to northeastern North America.

Monardas have long been prized for their medicinal and culinary properties and showy flowers, which attract bees, hummingbirds, and butterflies.

Many varieties range in colors from pink to crimson and light purple. The plant sports tubular flowers and is typically crowded into head-like clusters.

Because Bee balm is a member of the mint family, its fragrant minty leaves and flower buds taste like a blend of spearmint and peppermint with citrusy overtones.

Bee balm is used in teas and to flavor jellies, soups, stews, and fruit salads. Its flowers are edible, and the dried flowers are used in crafts. It was used as a tea substitute by the American colonists who were boycotting black tea just before the Revolutionary War.

Monarda citriodora and Monarda pectinata have pale lavender to lilac-colored blooms and slightly fewer flowers. Both species are usually referred to as lemon mint, and the plants typically reach a height of 3 to 5 feet.

How To Cultivate Bee Balm

Bee balm is an easy plant to grow in standard garden soil. Additionally, it thrives in heavy clay soils. 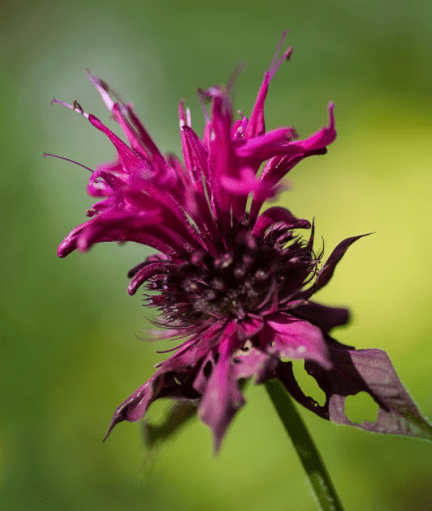 Split the plant every three to five years to prevent spread and to ensure the health of the plant’s central core. When the central portion of a cluster of plants begins to die, it is time to divide the plants.

In late summer, powdery mildew and rust can be a problem for bee balm.

Keep an eye out for slugs They eat young growth early in the season, which can be a problem.

You also can grow bee balm from seeds started indoors about eight weeks
before the last spring frost date. Transplant them into your garden approximately one week before the last frost.

Divide established plants early in the spring. Bee balm spreads rapidly, so give it at least 2 square feet of area per plant. Heavy mulching can help control its spreading; however, be prepared to pull or dig out the plant’s new growth.

How To Harvest And Use Bee Balm

Bee balm typically blooms from mid-June through early September. Gather edible leaves after the dew is dry and the flowers are in bloom. Dry them in small bundles within paper bags in a dry, ventilated area.

Bee balm can be used as a tea or an aromatic suitable for sachets and potpourri. For use in dried arrangements, cut the stems approximately 1 foot below the blossoms.

If you are planning to use bee balm in your recipes, do not use any sprays on the leaves or flowers.

Bee balm traditionally was used by Native Americans as a seasoning for wild game, particularly birds. Today, bee balm is still used to spice up various foods. If you like it, you can sprinkle fresh florets in your salad.

During the beginnings of the American Revolution, Oswego became quite popular among the colonists as a substitute for the imported black tea that was ultimately served at a tea party in Boston Harbor.

Perhaps it was then brewed up for King George and the redcoats, as it has a medicinal reputation of giving relief to severe headaches.

If you’d like your own cup of this revolutionary tea, harvest the leaves of bee balm before the plant flowers, while the tender young leaves have a light minty taste.

Later harvesting results in a strong and slightly bitter product.

Strip the toothy leaves from the stems and let them dry in a warm, shady place for no more than three days.

Too long a drying period in the hot sun will discolor the leaves and sap their flavor.

Store the dried leaves in an air-tight jar and place them out of sunlight for longer shelf life.

Being a member of the mint family, with its familiar square stems and strong root system, bee balm will spread in your garden if given half a chance.

Therefore, you might want to plant it in a contained area or in an underground plastic pot in order to maintain control.

Or better yet, dig it up every three years, discard the old center, replant one of the outside clumps and give the rest to friends.