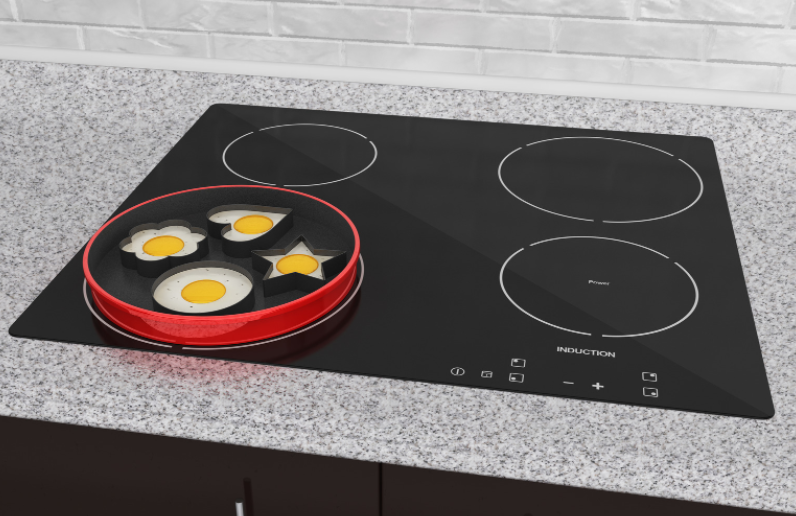 Induction cooktops and ranges consistently outperform all other types of ranges tested by Consumer Reports.

Indeed, every induction cooktop and range that has passed through their range laboratory provides rapid cooktop heat and exceptional simmering.

The technology’s strength and precision come from an electromagnetic field located beneath the glass cooktop surface that transfers current directly to magnetic cookware, heating it up.

On most 30-inch cooktops, the field is concentrated into four spots (or elements), and they function similarly to the elements on an electric cooktop or the burners on a gas cooktop.

Induction cooktops and ranges eliminate the step of preheating a burner and then transferring heat to the pot.

What Is The Definition Of An Induction Cooktop?

Induction burners (also known as induction cooktops or induction stovetops) resemble ceramic stovetops in appearance—they are flat, with the usually defined circles indicating where pots and pans should be placed.

However, unlike an electric cooktop, when the “hot zones” are activated, the circles do not glow orangey-red. This is because induction cooking heats the pot—but not the surface of the stove.

Unlike most gas stoves, this one lacks knobs for controlling the burners; instead, a digital touch display controls the burner heat.

How Does An Induction Cooktops Work

How does it differ from a conventional electric or gas burner?

An induction burner generates heat via electromagnetism. When the power is turned on, a coil of metal (typically copper) inside the cooktop generates a magnetic field.

When a pot or pan is placed in this magnetic field, an electrical current is generated, which heats the cooking vessel.

Due to the fact that induction heats food via an electromagnetic field, the pots and pans you employ must be composed of ferrous metal (meaning they have to have magnetic properties). Cast iron and enameled cast iron are proper materials.

The simplest way to determine whether your cookware is suitable for use on an induction stove is to use a kitchen magnet—if it adheres, you’re ready to go.

Induction cooking can rapidly heat a pot, as there is no energy loss to the air surrounding the pot or pan (something you do get with radiant heat like a gas or electric stove).

While boiling water a few minutes faster may not seem significant, it’s real gold on a Tuesday night when you’re holding over a spaghetti pot and your family is asking 40 kazillion times when dinner will be ready.

Additionally, the increased heat efficiency results in a cooler kitchen during the summer or a cooler space in a small kitchen or home.

Have you ever left your gravy on low heat and returned to a scorched or bubbling pot? Due to induction’s consistency (which is unmatched by gas or radiant electric heat), it can maintain a very low, steady temperature for an extended period of time.

Additionally, heat adjustments occur almost instantly because the temperature increase occurs directly within the pot (due to the magnetic field’s benefits), rather than passing through the element and then to the pot.

Without a pan on it, the induction surface will not heat up because it requires a reaction with your pot to generate heat.

Thus, even if it is turned on accidentally—or if you forget to turn it off—the surface remains cool. (However, if you use it to heat a pot, some residual heat from the pot may remain on the burner.)

Additionally, some induction burners will shut off automatically if they detect a pot has boiled dry or has boiled over; as a result of the lack of liquid in the pot, the temperature will rise and shut-off will occur at 500 degrees Fahrenheit.

What is the other significant benefit of your induction surface remaining cool?

Clean-up is a breeze—there are no baked-on foods from spills or splatters.

A simple wipe will restore everything to its original state. (You can let the kids drip ALL the pancake batter on that burner and still have a wonderful Sunday.)

Environmentally and energy-efficiently superior to natural gas or electricity

Natural gas is a fossil fuel, and its combustion contributes to global warming (and also indoor air pollution).

It was difficult to convince people to switch from natural gas burners to an electric stovetop when the functionality of a gas stove was clearly superior, but induction provides an excellent alternative.

Additionally, induction stovetops are more energy-efficient than electric or gas stoves, as they transfer less ambient heat inside the room and more directly into the cooking vessel.

Though prices have decreased, induction can still be more expensive than gas or electricity.

Bosch, GE, Whirlpool, and Samsung all market induction models at Amazon Online and Home Depot, with induction ranges (cooktop with oven) opening, at around $1,200 and going up to around $4,000.

If you’re interested in trying out induction as a secondary cooking unit or in a small space such as a dorm, portable, single induction burners are available for under $100 at retailers such as IKEA, Canadian Tire, and Amazon.

It may not be compatible with all of your cookware.

Remember when we said that induction is only effective on ferrous materials? This may mean that some of your pots and pans will no longer work if they lack a magnetic base; therefore, take out your fridge magnet and check.

Additionally, if you wish to use a wok, you must select one with a magnetic, flat bottom to ensure adequate surface contact with the cooktop.

Yes, cast iron (including enameled pots such as those made by Le Creuset), steel, and magnetic stainless steel (it must contain some iron)

No: copper-bottomed pots and pans and aluminum cookware (unless it has a magnetic bottom layer) pyrex or glass

Any new stove comes with a learning curve as you discover which settings work best for your cooking style.

The digital display’s heat control can take some getting used to; some allow for precise temperature setting, while others simply display numeric power levels.

Additionally, the more rapid and consistent heating may alter the timing of your cooking.

If you cook with a wok or toss your food, any time you remove the pot from the heat, the pot will briefly stop heating.