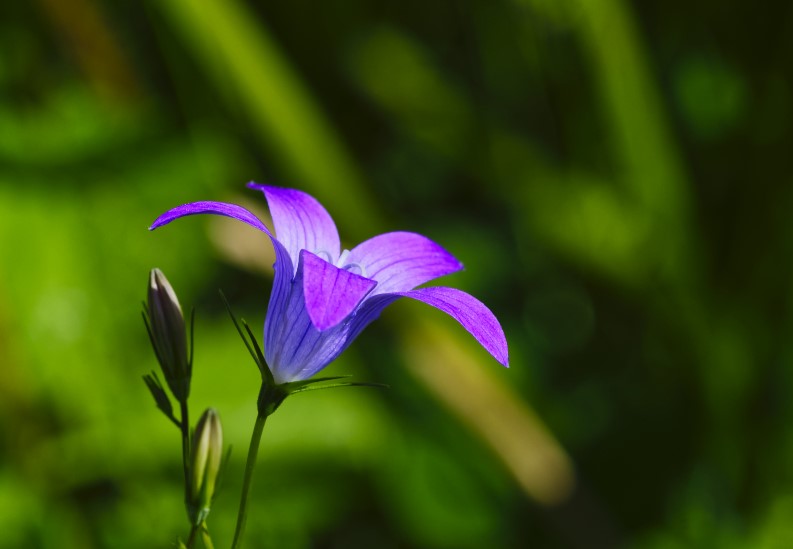 The genus Campanula comprises nearly 300 species, most of the herbaceous perennials.

Campanulas have been knocking around the northern hemisphere for a long time; a few species are considered relics from pre-ice Age times.

North America has relatively few native bellflowers, so we must borrow them from Europe, the Mediterranean, Asia, and the Near East.

Bellflowers are one of the hottest genera for plant breeding these days, so there are some exciting new surprises ahead.

Some species thrive in hot, rocky, dry places, and others revel in cool, damp woodlands.

The majority relish good garden loam in the sun or part shade and regular moisture. Pew (arc well in the deep South or hot Southwest, but many are hardy into Zone 4 and even 3. all flower in great profusion, with appealing five-parted, bell-shaped, or starry flowers.

Copious fine seed is set. Many species self-sow, and most are simple to grow from seed given a cold, moist period (stratified).

Spring is the best time to divide bellflowers and take cuttings. Most of the taller types make excellent cut flowers, provided their stems are seared with a flame or dipped quickly in hot water to seal the ends and prevent any of their often milky sap from oozing into the water.

Taller Favorites In the sumptuous summer borders of the British Isles, a host of taller perennial bellflowers take pride of place; many have proven themselves well-suited to most of North America.

The peach-leaf bellflower ((permozofia, Zones 3 to 7) is a popular favorite. Dainty 15- to 30-inch stems produce large, outward-facing powder blue or white flowers over a long summer.

If the plant is carefully deadheaded-each the spent flower individually removed rather than the entire stalk-the plant will bloom on into autumn from new buds formed at the axils of the old flower and stem joints.

The plants are short-lived, yet self-sow were happy. Double-flowered forms are common, both fully double puffballs and the more elegant “cup-in-cup” and “cup-in-saucer” types.

C. latiloba (Zones 4 to 7) is closely related to the peach-leaf bellflower but with more substance, greater longevity, and stronger stems.

Large, flat, outward-facing bells of lavender-blue, pink, or white open all along with the two- to three-foot stems in midsummer.

A three- to six-foot-tall, moisture-loving beauty, it sends up huge trusses of blue, pink, white, or mauve starry bells in late summer and will repeat into autumn if the spent truss is cut at the lowest flower on the stem. Plants self-sow lustily.

Campanulas for Woodland Shade Two natives of moist European woods offer showy blue-purple or white bells on leafy plants, a nice surprise in the summer woods when most of the flowering plants have finished.

Both are hardy in Zones 3 to 7. C. trachelium, the nettle-leaved bellflower, grew 18 to 30 inches tall and was once used as a gargle and mouthwash for inflamed throats.

C. latifolici is a bit taller, with up-facing tubular bells on strong three- to four-foot stems.

One of the few native North American bellflowers, two to three-foot C. divaricata from the southern Appalachians (Zones 6 to 8), deserves more planting in our woods.

Two spreading Asian bellflowers offer plump, elongated bells in white, mauve, and rosy maroon, usually with maroon flecks inside. C. punctata is the hardier, good in Zones 3 to 8, and shorter at 12 to 15 inches. C. takesmana (Zones 5to 7) is taller at 18 to 24 inches. A woodland garden is often a good place for its rampant ways.

Smaller Bellflowers Several low-growing, cascading, or mat-forming campanulas make great sense for rock gardeners and those with limited space. These are also the best candidates for poorer, drier soils.

Most have also proven to be more tolerant of warm nights and are better suited to the South and Southwest than the previous species.

Best known is the Carpathian harebell (C. carpatica, Zones 3 to 8), with large, up-facing, blue or white wide-open bells that bloom for a long time in summer.

At nine to 12 inches, it makes a dense mound and is excellent as a front-of-the-border plant. It is less heat tolerant than the following species.

For the dry garden, rosette-forming C. aucheri, C. tridentata, and C. sarmatica have all performed well in Zone 5.

Unlike most bellflowers, they bloom in spring and early summer. Lastly, for between paving stones, the cheerful little spreading fairy thimbles (C. cochleariifolia, Zones 5 to 7), with nodding blue or white bells, offer long bloom in light shade for most of the summer on four- to six-inch stems.

There’s a bellflower for every garden but beware of the impressively invasive, hard-to-eradicate, tenaciously adaptable C. rapuMculoides.

Do not be seduced by its dainty 12- to 18-inch stems with narrow, drooping purple bells. It is an aggressor bent on world domination.

GOOD SELECTIONS OF BELLFLOWER TO LOOK FOR

How to Grow Campanula Bellflowers

Campanula Bellflowers can grow from seed or rhizomes. The tiny seeds should go in prepared soil in spring after all danger of frost has passed.

Make sure to keep seedlings moderately moist when caring for bellflowers. To plant rhizomes, sever them from the parent plant at a root node and bury the roots in the soil.

Caring for bellflowers does not require any expertise. As with most perennials, they are hardy plants that tolerate quite extreme weather and arid conditions.

Bellflower care includes deadheading to promote more blooms and a longer-lasting display. You can also cut it down to the ground from late winter to early spring to rejuvenate the plant.

Also, some varieties of bellflower have invasive potential, and seed heads need to be removed before they spread.

There are many types of bellflowers.

Some of the most common include:

Bluebells – Bluebells are one of the most common Campanulas.  These tiny woodland flowers are common across North America in highland fields.

Scotch bluebell is native to the British Isles and may get 10 inches (25 cm.) tall.

Dwarf bellflowers – Dwarf bellflower is useful in container gardens and tucked into rockery crevasses.  It gets only 3 inches (7.5 cm.) tall but may spread 15 inches (38 cm.) wide.