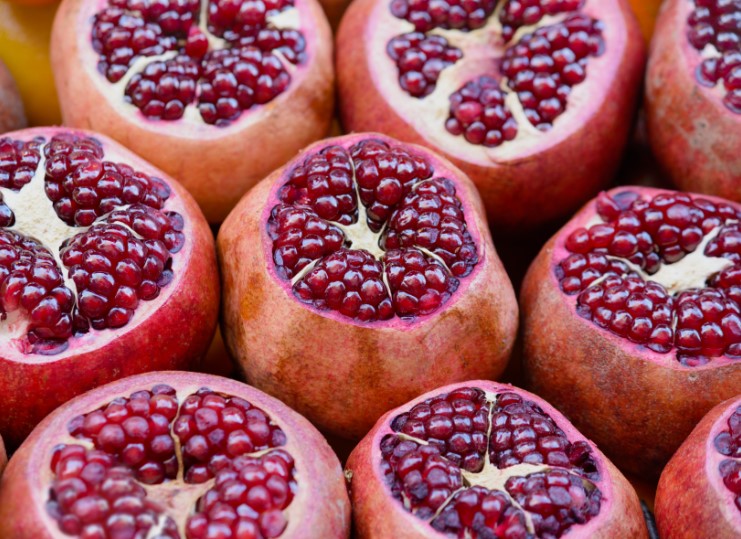 Now is the time to enjoy that brief window when pomegranates brighten the produce aisle with their brilliantly red color and juicy, sweet-tart flavor.

At the end of September and usually into January, these bulb-shaped crimson fruits make colorful mounds in super-markets.

Endemic to Iran and northern India, this fruit was fitted and cultured all over the Mediterranean for millennia of years.

Today, most of the pomegranates made in the United States are developed in Arizona and California, as they flourish in a semi-arid climate with cool winters and hot, dry (not humid) summers.

This regal fruit, with its leathery red skin and The small crown, is a complex one.

It houses hundreds of arils (tiny seeds)— as many as 800 per fruit—encased in juicy, brilliant red pulp separated into clusters by a bitter cream-colored membrane.

Rich in antioxidants and vitamin C, they deliver good health and cheer this season. It takes a bit of time to get at them, but it’s well worth the effort.

(Their heft indicates a large number of seeds and retention of moisture—older fruits begin to shrink as they dry out).

Although several different pomegranate varieties are produced for a market that ranges in size and balance of sweet to tart flavor, they are not usually identified.

Store whole fruits in a cool, dark place for up to 1 month or in the refrigerator for up to 2 months.

Store seeds in a covered container in the fridge for a couple of days, or refrigerate them in a closed freezer container for up to 1 year.

Using a sharp knife, cut the fruit vertically in half. Using your hands, gently break the halves into smaller sections.

The vivid-red juice can stain, so clean the work surface immediately with warm, soapy water. Consider wearing an apron or work shirt, as the seeds can be messy.

Place the pomegranate sections in a bowl of water. Using your fingers, gently loosen the seeds from each section into the water. The seeds will drop to the base of the bowl.

Discard the peel and membrane that will be left floating on top. Pour the water and pomegranate seeds through a sieve to catch the roots.

One medium pomegranate yields about ½ cup seeds. Use the seeds in desserts, salads, beverages, and more.

In a 3½ – to 4-qt. Slow cooker, combine the seeds and juice from 4 pomegranates (see above for prep), eight 2-inch strips of zest cut from 2 lemons and their juice, 1½ cups red wine vinegar, 1 cup honey, ½ cup sugar, and two cinnamon sticks.

Mash the seeds slightly with a potato masher—cover and cook on low for 4 hours. Remove crock from the cooker, if possible.

Cover and chill syrup for 4 to 24 hours. To serve, pour 3 Tbs. Syrup into an ice-filled rock glass.

Simmer, uncovered, until thickened and of a glaze consistency, 5 minutes.

Add sweet potatoes and gently toss to glaze. Remove from heat and stir in chopped fresh parsley and mint.

Transfer to a serving dish. Top with pomegranate seeds.

Macerated Grapefruit with Pistachios and Pomegranate

Remove skin and membrane from 4 grapefruits and slice into ¼-inch-thick rounds. Place in a large wide-mouth jar and cover with grapefruit juice mixture.

Cover and chill for at least 1 hour or up to 5 days. To serve, divide among shallow bowls; pour the liquid over slices.

Brush 16 baguette slices with olive oil and sprinkle with pepper.

Bake at 350°F until crisp, turning once, 8 minutes. Top each slice with a slice of log Brie cheese.

Bring ¾ cup pomegranate juice to a boil. Reduce to ¼ cup, 5 to 8 minutes. Cook 1 lb. chicken tenderloins in olive oil until no longer pink; remove from pan and keep warm.

Cook wedges cut from half of a medium red onion in olive oil seasoned with salt and pepper just until onion is tender.

Boil for 1 minute; remove from heat.

Divide among four half-pint jars with lids. Cover and refrigerate for no less than six hours and up to 24 hours.