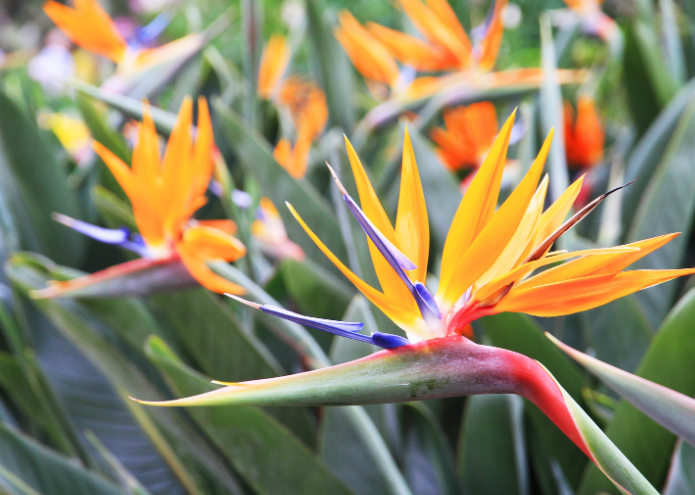 Is there a plant that seems more exotic and tropical than the bird of paradise? It is native to South Africa, not the traditional “Tropics,” but it is now commonly grown throughout the temperate and tropical world, and it is not as finicky as one might imagine.

It is known as the crane flower in its native country because of its likeness to cranes, which are heron-like birds.

It’s a strange bloom, almost two-dimensional in appearance. The true petals are the blue center of the flower, and it is here that carries the pollen and nectar that attracts the pollinating birds.

The leaves are heavily textured and shaped like paddles with very long stalks (officially called petioles).

The bird of paradise is a colossal and magnificent indoor plant. In our supermarkets and garden centers, we usually have two species.

Strelitzia reginae, which has orange flowers, and Strelitzia Nicolai, which has white flowers. The orange-flowered bird of paradise is less frequent and more expensive.

Most years, established plants will flower, usually in late winter or early spring. The white-flowering variety is more widely accessible, but in our environment, it is unlikely to flower.

Both are lovely foliage plants, but if you want orange, make sure you get Strelitzia reginae. If it doesn’t state reginae on the label, it’s not reginae.

Growing And Propagating Of Bird Of Paradise Plant

Strelitzia may be germinated from seed, although it will take at least four years before it produces a flower. Purchase seeds of Strelitzia reginae, soak them for a few hours, and then scarify the surfaces with a nail file; this will help them germinate.

Sow the seeds in a propagator in just over 2cm of compost mix and cover to ensure a humid environment. When the young shoots gain two leaves, transplant them into pots.

Or, if you simply cannot wait the four years, Strelitzia may be grown by division, thus halving the time before flowering.

If you buy established plants, pot them in a loam-based compost and place them outside in summer, or plunge them straight into a border for an instant splash of tropical color.

Strelitzia should be watered and fed frequently in well-drained soil over the summer. Potted plants, in particular, need to dry out completely before re-watering or they risk yellowing and rotting.

During winter, when the plants are brought indoors they should be left to dry out almost entirely and then fed in the spring to encourage new growth. When frosts have retreated, they are ready to go outside again in a south-facing position.

Origin Of The Name Strelitzia Reginae

The Bird of Paradise was initially introduced to the UK by botanist Sir Joseph Banks in 1773. Banks accompanied Captain Cook on his first voyage in 1768.

During that time he founded scores of new plant species, such as Eucalyptus and his namesake genus Banksia.

He played a significant role in introducing previously unheard-of specimens and was soon leading groups of explorers into the depths of Africa to discover new breeds, which is where he came across Strelitzia.

He was director of Kew Gardens and, in a style befitting a loyal subject, named the exotic flower to commemorate the German Duchess of Mecklenburg- Strelitz, a Kew resident known to most others as Queen Charlotte, wife of King George III.

Banks discovered Strelitzia in South Africa where it is native to the western coastal areas and riverbanks of the Northern Cape Province.

The Strelitzia genus has only five progeny, the tallest of which, Strelitzia Nicolai, can grow up to ten meters.

Most specimens are between two and six meters tall. As if their enormous height was not statementing enough, each plant produces explosive blooms of three electric blue petals and a trio of tangerine orange sepals.

In the wild, Strelitzia is pollinated by birds, which land on the spathe perch at the base of the flowerhead.

Pollen is rubbed onto the bird’s breast and deposited on their claws and so transferred to the stigma of the next flower. The birds also disperse the hard seed of the plant’s fruit in their droppings, thus continuing generations of this magnificent flower.

This may not be a plant you can have in your garden all year round, but while it blooms Strelitzia will make a showstopping accent to any border, a great pot specimen, or the most extravagant and long-lasting cut flower.

Strelitzia is a monarch in its own right and is even the national flower of Madeira. With such noble ancestry, it is no wonder gardeners still delight in the challenge of cultivating this unique plant.