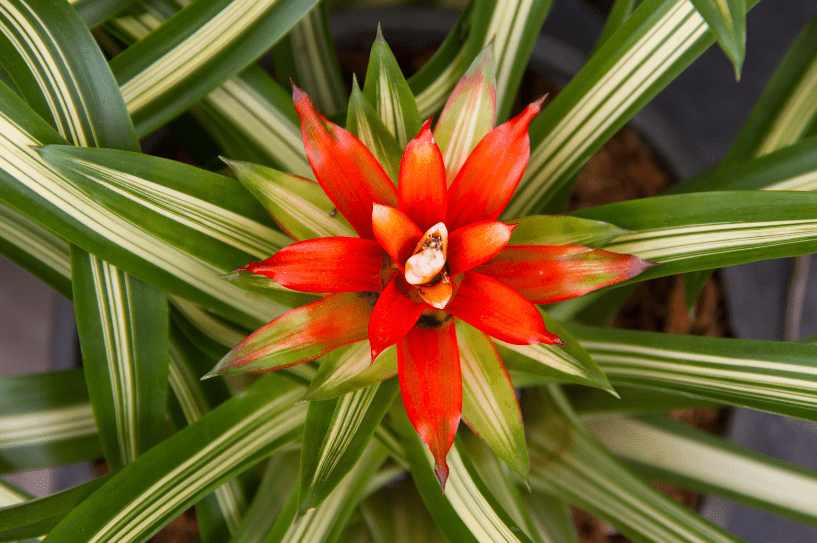 This plant adds color in a way that most plants do not. Most house plants don’t flower; when they do, it’s only for a brief period. However, bromeliad plant can add color to any room.

Many kinds of bromeliad plants exist, according to experts. Many of us know and love the Guzmania, with its colorful flower-like formations near the top and long, evergreen leaves near the bottom; there is a whole world of bromeliads for plant enthusiasts to begin caring for.

A quick tip: When a bromeliad plant reaches maturity, the blooms are spindly and delicate compared to the colorful bracts.

Approximately 3,000 species of bromeliad exist. Bromeliads are distant cousins of pineapples, though bromeliads themselves aren’t edible.

Colorful house plants are more common, but some bromeliads are air plants, which take moisture from the air and use it for growth.

Tillandsia: Often called air plants, these are a type of bromeliad, though some grow in soil.

The plants look like spiky green stars with lots of layers, and range in size, although most can fit in your palm.

It is one of the few types of bromeliads that like direct sunlight and frequent misting. Some produce flowers.

Guzmania: The most well-known bromeliad, Guzmania is distinguished by its vibrant bracts, which are often orange, red, or yellow, and its simple maintenance requirements.

It is highly improbable to flower; even if it does, the flower won’t be very tall compared to the bracts.

Vriseas: Vriseas are known as “blazing swords” because of their striking geometric orange and yellow bracts. As Vriseas approaches the end of its lifespan, it may only ever blossom once.

Neoregilia: These have much stiffer bracts and a small amount of spike on edge. From vibrant pink to dark brown, the colors are varied. Small flowers could sprout from the cup’s base if you’re fortunate.

Cryptanthus: These resemble other potted green plants more closely and are sometimes called earth stars. Their leaves, which can be pink, red, or forest green, develop in a rosette shape.

Science discovered an entirely new species of bromeliad plant. It grows up to 5 ft and is found in rocky habitats in northern Morelos. They flower between December and March.

Toxicity: Not toxic to humans or pets

Water: Overwatering a bromeliad is a guaranteed way to destroy it, just like it is with many other houseplants. Even though they enjoy humidity, they only require water around twice a month on average.

For some who find it difficult to understand, a bromeliad simply requires water when it is dry. Get to know your bromeliad and give it a few daily checks. Should simply water the plant’s “cup,” or center, directly.

Like orchids, bromeliads prefer soil that is loose and well-draining. For bromeliads, you can use orchid mix (experts do this occasionally) or a combination of peat moss, perlite, charcoal, and/or bark.

Since bromeliads typically take a very long time to mature, experts advise buying one when it has reached the size you want throughout most of its lifespan.

Large plants can be housed in relatively tiny pots due to their shallow root systems. Any type of pot with drainage, whether made of clay, plastic, or another material, may be used.

Tropical plants called bromeliads prefer temperatures between 60 and 80 degrees Fahrenheit, while they can survive in temperatures as low as 50 degrees or as high as 90 degrees.

High humidity benefits bromeliads, though it might vary depending on the species. Guzman’s are not often demanding.

Although they are not required, humidifiers might be helpful if you live in a dry area.

Give your bromeliad a brief spritz with a spray bottle a few times each week if your climate is typically humid.

It’s too light if your bromeliad’s leaves have white or brown blotches, indicating overexposure.

Your bromeliad will enjoy this mix of indirect light and high humidity if your bathroom has a window.

The most frequent issue with bromeliads is overwatering. According to the expert, “their shallow root system rots away, and you’ll see it tilt over.”

It is then burnt. If a bromeliad has brown blotches, there is probably not enough humidity in the air.

Cut back your bromeliad to the point where the color is vibrant if you notice it beginning to brown and lose its bracts.

Pups are the smaller branches that sprout from a plant’s root system.

They will do better if you let them stay on the mother plant until they are between one-third and one-half the size of the original plant.

They can then be taken out and replanted at that stage.