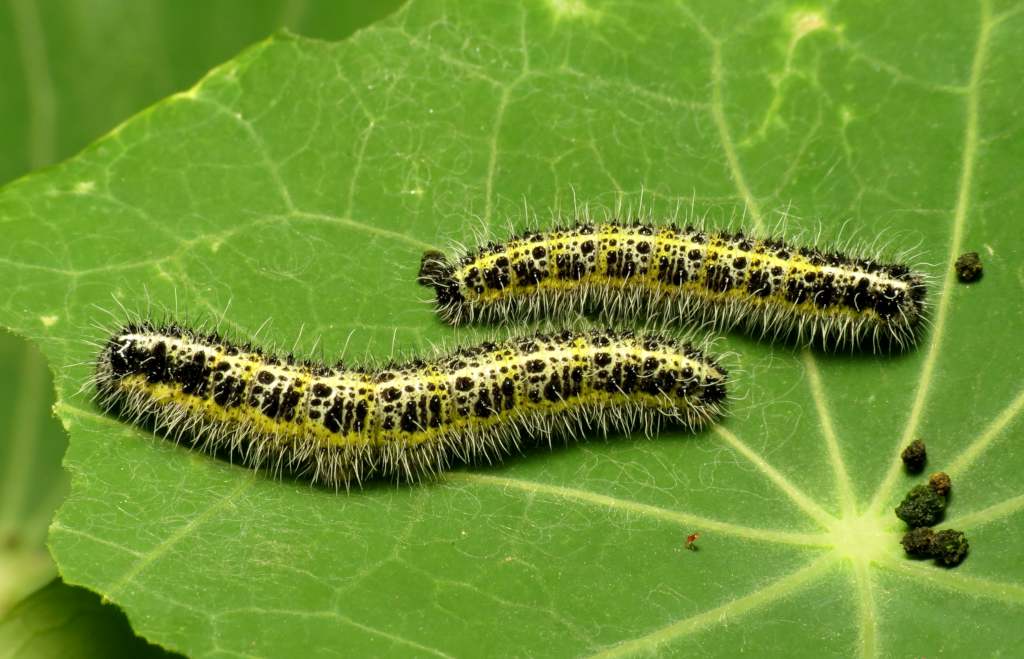 Caterpillars are the early or larval stage of butterflies and moths. Not all are major plant
pests, but certain types, such as cabbage white caterpillars, can wreak havoc in the
garden.

Some caterpillars attack almost every type of garden plant, from trees and shrubs to herbaceous perennials, as well as annual flowers, vegetables, and fruit.

Although they vary greatly in appearance, caterpillars have several basic characteristics
in common:

near-cylindrical, soft bodies, three pairs of jointed legs at the head end, and generally five pairs of grasping ‘prolegs’ on the abdomen.

Commonly green or brown in color, some have clearly visible hairs or distinct markings on their bodies. Like many other pests, caterpillars are most likely to cause damage during spring and summer, but some, such as the winter moth, are active during the colder months.

Their life cycles follow a similar pattern, starting with the adult butterflies mating ‘on
the wing’ (in flight), followed by the female laying her eggs on a suitable host plant. When
the eggs hatch, the young caterpillars emerge and begin to eat, damaging the plant and
growing rapidly.

Once at full size, the caterpillar finds a suitable spot – generally somewhere protected – stops moving, then turns into a chrysalis. It’s from this that the adult moth or butterfly eventually emerges.

Apples: The young fruits are tunneled by codling moth caterpillars, white with distinct brown heads. Feeding starts in summer and, by harvest time, the pest has already left the fruit, leaving a discolored, brown tunnel in the flesh, filled with black droppings.

With the bad part cut out, the fruit should be eaten immediately as the damage will cause them to rot in store.

Small white caterpillars are much smaller, pale velvety green, and do the most damage in the hearts of cabbage and heads of calabrese.

Plums: The eggs of the plum moth hatch into whitish-pink caterpillars, up to 12mm long, which tunnel into the developing fruit to feed, usually close to the stone.

The area then fills with dark brown droppings. Infested fruits often ripen prematurely and may be flattened in shape.

The small caterpillars may be visible if the leaf is held up to bright light. Severe infestations may cause premature leaf fall.

Leeks: The leek moth causes off-white to brown patches on the foliage of leeks and onions. Up to 12mm long, these leaf-mining caterpillars may also tunnel into the stems and bulbs.

Silken cocoons can form on the foliage later in the year. Use up the least-damaged crops quickly, as they are liable to rot.

Prevention Stopping adults, such as cabbage white butterflies, from reaching vulnerable plants will prevent them from laying their eggs. Fleece or very fine mesh works best but must be in place before adults appear and should be kept in place until they are no longer present.

Fleece and mesh-covered tunnels or ‘cages’ erected over plants and beds make this
much easier.

Apply grease bands or rings of non-setting barrier glue to apple tree trunks to prevent
flightless adult winter moths from crawling up to lay their eggs on the leaves.

The grease band must be kept clear of debris or anything which could act as a ‘bridge’ allowing the moths to pass.

Encourage predators such as blue tits to your garden with bird feeders hung on trees and
shrubs. Birds waiting to gain access to the feeder often pick off pests, including
caterpillars from nearby foliage, branches, or buds.

Remove caterpillars by hand, then squash them or put them on a bird table. Do not handle any hairy caterpillars, as they often produce allergic or other unpleasant reactions.

With caterpillars that infest brassicas’ heads or hide in other well-concealed places, it is essential to search thoroughly and daily.

Prune out any wilted summer stems on trees and shrubs that may be harboring tunneling
caterpillars, such as leopard moths. This will at least prevent them from completing their life.

Biological control nematodes are available for caterpillars, including cabbage whites and codling moths.

Pheromone traps can be used to catch male moths, preventing mating. They are attracted to what they believe to be female moths but are an artificial pheromone and sticky glue inside. These traps p to reduce numbers but are best used to indie male moths and predict a caterpillar infestation.

Consider spraying with deltamethrin or organic pyrethrum if all else fails.