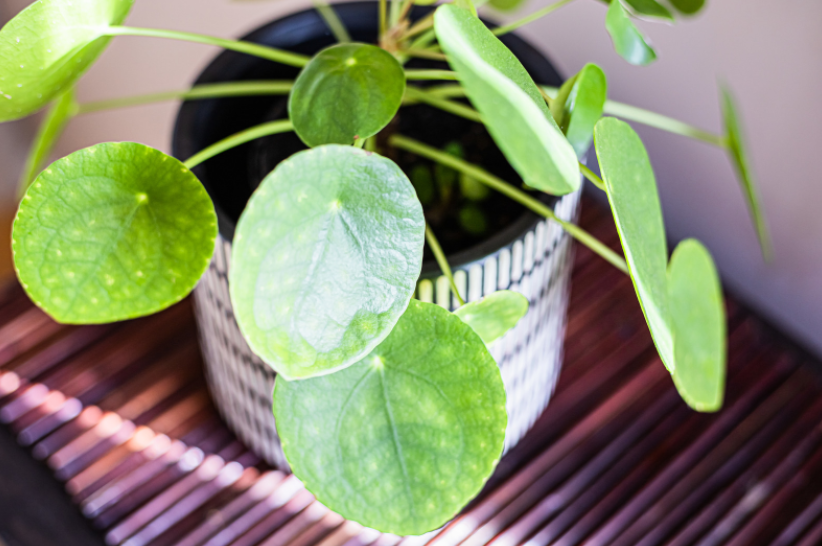 Mystery surrounds the origin and distribution of the Chinese money plant, commonly known as a U.F.O Plant. Botanist George Forrest collected a specimen from Southern China for the Scottish herbarium in 1906.

The dried, pressed specimen was forgotten in the herbarium collection for over 60 years.

Interest in the plant resurfaced in 1978 when Kew Gardens discovered this humble pilea grown by English and European gardeners as an indoor plant.

But how did gardeners get hold of the plant? There was no reference to it in nursery catalogs.

Kew Gardens was only aware of George Forrest’s original botanical reference in the Scottish herbarium.

It took newspaper and television stories in this pre-internet era to trace the introduction of the plant into Europe back to a Norwegian missionary.

Stationed in China until the mid-1940s, he is known to have returned home with a single plant.

Its hardy constitution, ease of propagation, and ability to be shared (also called the friendship plant) saw it spread from one gardener to another.

But the plant was never propagated on any sizeable commercial scale – at least, not until now.

Add a hint of rarity to most things, and the price rises accordingly. You will still find tiny seedlings of the Chinese money plant selling online for up to $50 each.

Pilea envy surfaced following boast posts on Instagram by those who managed to buy or acquire a plant. Social media plant celebrity Darryl Cheng (@houseplantjournal) celebrated pilea parenthood with a post in December 2016.

The plant appeared on American breakfast television. It even has its hashtag (#pilealovers). Proud owners of Chinese money plants even began wearing enamel pilea stick pins.

There are over 700 species of pilea, most of which are easy to grow.

The Chinese money plant has distinctive rounded leaves with a peltate (umbrella-like) stalk.

The thick, succulent leaves retain moisture, which copes with intermittent watering. It is perfect for busy or inexperienced plant lovers as you only need to water it when the soil is quite dry.

A teaspoonful of controlled-release fertilizer every six months is enough to supply the plant’s nutritional needs, but you can add additional liquid fertilizer if you are keen.

The Chinese money plant is perfect for a well-lit room or protected patio with no direct sunlight.

Plants tolerate being pot-bound, so if you are short on space (most people are), you can keep it in a small container for a very long time.

It slowly multiplies to form a complete, domed cluster of leaves, or you can remove the side shoots (pot them for friends).

The National Garden Bureau (NGB) has announced the addition of a new category, houseplants, to its “Year of the” series and has chosen peperomia as its inaugural winner this year, 2022.

A healthy Pilea peperomioides, affectionately nicknamed the “sharing plant,” is very simple to propagate as it produces offshoots readily.

These offshoots originate from the root system, but they can also grow from the nodes along the mother plant’s stem, typically where old leaves have fallen off.

To separate an offshoot from the mother plant’s roots, gently excavate the soil to expose the offshoot’s roots, and then cut the main root an inch or two below the soil with a clean knife or pruning shears.

Immediately place the separated cutting in a separate container containing moist soil. Keep the soil hydrated (but not soaked) until the new plant has established a root system in its new container and then resume regular watering and fertilizing.

Commercial propagation now allows us all to own this coveted species. Satisfy your desire for a Chinese money plant without breaking the bank with a visit to your local plant retailer this weekend.

Houseplants That Are Easy To Propagate

All you need is soil and for some of these, you don’t even need that.

In the tropical regions, pothos (Epipremnum aureum) could even climb trees up to 50 feet in height and has leaves up to 3 feet in length. The plant grows smaller indoors, but it is still a fast-growing and forgiving houseplant.

It is also simple to propagate. Kathy Trout, co-owner of Ken’s Gardens, says that stem cuttings will root in water or soil.

Place a 1-inch to 1-and-a-half-inch piece of stem with a leaf and a node (the swollen area where leaves emerge from the stem) in water or soil. Place the cuttings directly in the sun. If you germinate your seeds in water, plant them in soil once roots appear.

Try compound layering with a pothos vine if you are up for a challenge. Extend a vine over the growing medium and press a few segments into the soil. Cut or peel off a small stem piece and insert it into the soil, where roots will eventually grow.

The inch plant is the quickest and simplest plant to propagate, according to Jody Davey, manager of conservatory habitats at Hershey Gardens. Roots will develop on cuttings placed in water or soil, sometimes within days.

One of the popular names for Tradescantia zebrina is the inch plant. Because of its relationship with anti-Semitism, a significant proportion of the plant kingdom has abandoned a common name.

Multiple local garden centers employ the botanical term. Other innovative common names for this plant include wandering dude and spiderwort.

The flowers are small, white, and not showy. Plantings are grown mainly for the variegated foliage selections including a variety of Vittatum with a white central stripe.

Plants also form attractive hanging baskets and can be used in planters along with seasonal flowers.

The baby plantlets of Chlorophytum comosum can be cut from the plant and rooted in water or soil.

This succulent (Senecio rowleyanus) has strings of leaves that look like little juicy pearls. Outdoors, this plant roots when it touches the soil, forming a dense carpet of succulent beads.

“If you have it in a hanging basket and it’s trailing down, you can literally put a pot of soil underneath and they’ll root in very easy,” says Jen Hollenbaugh, greenhouse manager for Esbenshade’s Garden Centers’ Lititz store.

Another option is to cut a three- to a four-inch section of stem, strip leaves from the bottom, and place them in potting mix.

Once the new plants are established, don’t overwater. A string of pearls is native to arid areas and will rot with too much water.