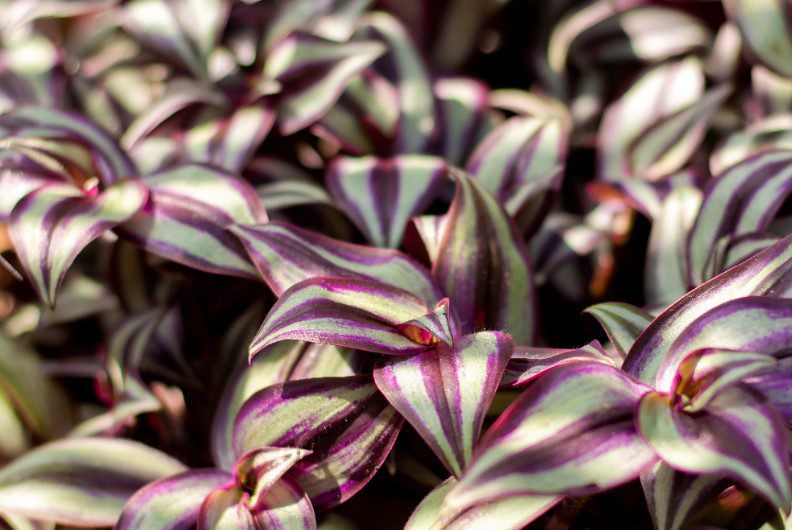 Tradescantia is often a welcome invader to garden borders where it readily self-seeds and can become a permanent fixture.

Known as spiderwort, perhaps because of its narrow, strap-like leaves, the genus consists of 71 species of perennial plants in the monocot family Commelinaceae. It can be found growing wild in the UK, in clumps, or individually in wooded areas.

Tradescantia species are weakly upright, scrambling plants that can reach 75cm in height. Some varieties are more compact, however, and reach heights of just 30cm.

Their most recognizable characteristic is their three petalled flowers, often lavender-blue, with six yellow anthers in the middle.

Tradescantias was introduced to Europe in 1629 with the now naturally occurring T. virginiana. The genus takes its name from the 17th-century plant hunter John Tradescant, the Elder.

While the plants tend to have a trailing habit – great for hanging baskets or summer window boxes – they have been extensively propagated since their first arrival for borders and containers. The most commonly available variety is T (Andersoniana Group), also known as T. x andersoniana.

All the cultivars included in this group were cultivated by cross-pollinating T. virginiana, T. ohiensis, and T. subaspera.

Three other species, known collectively as wandering Jew, are not fully hardy in the UK. The shade-tolerant T. fluminensis has small, green leaves and white flowers and has been known to overwinter in southern England.

Others, sold as houseplants for their foliage interest, include T. pallida, which has variegated leaves of green and purple or red, and T zebrina, which has stripy leaves of white and green.

All hardy tradescantias grow in various soil conditions as long as they are not in the shade for the entire day. In addition to blue, flower colors in modern hybrids can be found in various hues, including purple and pink.

The plants do not require much care. Once a plant has finished flowering in mid-summer, it should be cut back to encourage a second bloom in the autumn and prevent seeding, if unwanted. Cuttings can be taken in the spring.

Tradescantia is not particularly susceptible to pests and diseases, although the fleshy leaves may be tempting to some garden pests such as slugs.

WHAT THE SPECIALISTS SAY

It doesn’t like to be waterlogged but is easy to grow and take care of. It bulks up and clumps up double every year.

” Tradescantia is one of the easiest border plants to grow. I sell quite a lot. Many people don’t know what it is, but once they do, they are quite tempted to buy. The only problem is that once it’s finished flowering, it looks awful.

“My bestsellers are T (Andersoniana Group) ‘Concord Grape,’ which is a nice deep purple; little Doll,’ a very pale blue plant; and ‘JC Weguelin’ Award of Garden Merit (AGM) – a taller, pale-blue variety. Then there’s ‘Bilberry Ice,’ a nice little one that’s only been around a few years.

“We propagate on site. The plants can get a bit nibbled by slugs and snails in the nursery, but in the garden alongside the nursery, which we open for charity, it’s not a problem. The only problem is when they have finished flowering – it is then a case of deadheading and tidying up.”

Kevin Marsh, grower, Beeches Nursery, near Saffron Waiden, Essex “Are really easy to grow, but some people don’t want them. I don’t think they’ve ever been particularly in fashion. The problem is that they hold their old flowers when they fade, so they look like a mess after flowering.

“Most people associate them with granny’s garden. There are nice colors, though. T (Andersoniana Group) ‘Osprey’ AGM is a bestseller with white and blue flowers, and ‘Perrine’s Pink’ is a dusky pink with a greyish leaf.

“They split easily and are no trouble to grow in any soil. It’s just that they look like a mess in the hedge, and the public doesn’t like that. The plants like sun and part shade – as long as they’re not too dry, they are not fussy.”

“The only recent promotion we have done is for Hillier’s T. (Andersoniana Group) ‘Sweet Kate’ four years ago when we did a big push because it was new. It’s now our bestseller because it has yellow leaves and blue flowers, so it stands out.

* T. (Andersoniana Group) ‘Concord Grape’ is a low-growing variety with frosty-blue foliage. It has purple flowers 2cm across and reaches a height of 45cm.

* T. (Andersoniana Group) ‘Innocence’ produces pure white flowers and grows to a height of 60cm. This variety has few of the largest flowers of all the tradescantias.

* T. (Andersoniana Group) ‘Isis’ Award of Garden Merit (AGM) has large, blue flowers and narrow, green leaves. It grows to 60cm in height and has a spread of 50cm.

* T. (Andersoniana Group) ‘JC Weguelin’ AGM features violet-blue flowers from June to August. It grows to a height of 60cm.

* T. (Andersoniana Group) ‘Karminglut’ has Bluegreen foliage contrasting with pinkish-purple flowers. It grows to a height of 60cm.

* T. (Andersoniana Group) ‘Little Doll’ is a dwarf variety, producing large, blue flowers from June to September. The foliage is finer than on other varieties of the genus.

* T. (Andersoniana Group) ‘Osprey’ AGM produces white flowers with contrasting fluffy blue stamens. It may grow to a height of 60cm with a spread of 50cm.

* T. (Andersoniana Group) ‘Pauline’ has lilac-pink flowers and grows to a height of 50cm.

* T. (Andersoniana Group) ‘Perrine’s Pink’ has a drooping habit and produces pale-pink flowers. It grows to a height of 45cm.

* T. (Andersoniana Group) ‘Purple Dome’ produces an abundance of violet flowers from June to September. It forms clumps and is fairly fast-growing. It reaches a height of 50cm and a spread of 40cm.

* T. (Andersoniana Group) ‘Red Grape’ displays deep-pink flowers and blue-green foliage. It grows in the high sun and partial shade, reaching a height of 60cm. It prefers moist soil and can be used in borders or wildflower gardens.

* T. (Andersoniana Group) ‘Sweet Kate’ has vivid yellow foliage that sets it apart from other varieties. It also produces large, violet flowers that contrast strongly with the leaves and has a more upright habit than many other varieties.

* T. fiuminensis is a tender species with small, green leaves and white flowers. This variety is shade-tolerant.

* T. ohiensis is a tall variety that flowers in May and produces purple flowers above grey foliage.

* T. pallida AGM has green variegated, purple, or red leaves sold in the UK as a houseplant.

* T. zebrina AGM has distinctive, striped, white, and green leaves and is sold as a houseplant.