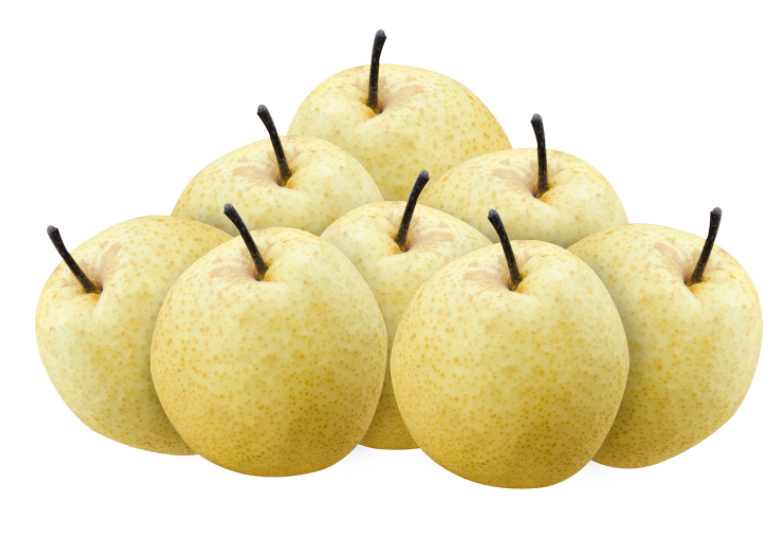 Chojuro And Other Asian Pear Varieties

*Hosui (“abundant juice”). Large round russet pear is exceptionally tender, sweet, and aromatic once it is ripe. It was introduced in Japan around 1972. It was derived from an intercross created in 1954. It is now the most popular variety in California and is considered the most desirable due to its exquisite taste. Overripe specimens develop a rummy taste—early-mid season.

*Nijisseiki (more correctly, nijusseiki; “20th century”). Classic round and light-skinned pear. Seedlings were first introduced in Japan in 1898 and changed the way pear production was conducted. The most renowned flavor, with juicy, crisp flesh with minimal grittiness, yet tiny. For many years, the best U.S. variety. Its pale green skin is partially tinged with yellow. Mid-season.

*Shinseiki (“new century”). Cross from the 20th century and Chojuro were Introduced in 1945. The most popular of the early varieties. Medium-sized, very solid, some are rock hard, with a crunchy texture similar to an apple. Texture coarse, flavor mild. Skin smooth and bright yellow when ripe. Avoid green species. The lumpy bottom indicates poor quality. Early.

*Ya Li (“duck pear”). The most well-known Chinese pear, which is another species than Japanese varieties. It matures between green and yellow-green, but it is sometimes difficult to tell whether the fruit is ripe. Not round, but the shape is pyriform (or “pear-shaped” with a long stem. It has a smooth, slightly waxy skin, crisp white flesh, and a somewhat sweet-tart flavor that occasionally borders a musty. Late.

The Historical Varieties (not commercially significant)

*Chojuro  (“plentiful”). The first-ever improved Japanese russet pear. Introduced in 1895; sweet and resistant to disease. However, one of the two top varieties in California, along with Nijisseiki, is drier than the new varieties and not often planted in the present. Mid-season; orange-brown when it is it is ripe. The aroma is distinct, and the flavor gets better during storage.

*Okusankichi (“madame luck”). Traditional Japanese variety dating from the mid-19th century. Large round or oval-shaped russet pears. A specialty that is the product of Placer County Nisei growers, losing its commercial appeal. Ripens in October. Crisp, very firm, slightly rough flesh with a sweet-tart taste. When harvested, it is fair and gets better when stored.

*Ichiban Nashi (“first pear”). The first Asian pear that ripens in the latter part of June. Skin is light gold-colored and russet, delicious; it keeps poorly.

*Kikusui (“floating Chrysanthemum,” the symbol of the Japanese royal family). Yellow-green skin. Similar great taste as 20th century, only flesh has become coarser and more substantial. Mother of many varieties.

*Kosui (“juice of luck”). Skin golden-brown with a light yellow to the green background. Sweet, juicy, and delicious. Early.

*Niitaka (“new quantity”). Large firm, firm, orange-brown, russet pear. The flesh is a bit coarse, and the flavor is average; popularity is declining. The season is ending.

*Seuri (Japanese spelling; perhaps Chinese se li, “red pear”). A round Chinese pear with a color of yellow with some mottling of russet. Delicious but unattractive. The trees are used as pollinizers. Late.

*Shinko (“new success”). Popular russet variety with a full-bodied and nutty taste. It is resistant to fire blight and can be stored for a long time. Mid-late season.

*Shinsui (“new juice”). The first russet variety to emerge. It looks and tastes similar to Hosui; however, it is a little smaller and less gritty. It is delicate and easily bruises.

This year they were loaded with fruit, and even though we thinned them, we harvested more than 20 pounds of pears from the “Chojuro” and even more from “Hardy Giant.”

Unlike European pears, which need to be picked before they mature to keep their texture from turning “gritty,” Asian pears are best if allowed to ripen on the tree entirely. Thankfully, the raccoons are not the least bit interested in them.

The only drawback is that the varieties we grow ripen so late our farmers market is over by the time they are ready to pick, so we end up giving most of them away. Luckily they are good keepers, lasting two weeks at room temperature and up to five months in the refrigerator.

Enjoying great popularity in Japan, China, and Korea, where they have been eaten and enjoyed for centuries, Asian pears were brought to this country more than 160 years ago by immigrants wanting to bring a taste of home along with them to the new world.

They did not become widely popular here until the 1980s. Great for eating out of hand like apples, they also make an elegant dessert item. In Japan, slices of peeled pear are often served after dinner.

If you want to grow your Asian pears, there are many varieties to choose from, so look for locally grown ones at your favorite orchard or farmers’ market and do some taste testing. Or You can order a 2-year-old Chojuro tree from Amazon direct to your home.

The subtle flavors vary from butterscotch to honey to banana to floral to cinnamon, but all are crisp and juicy.

In Japan, they are called apple pears because of their shape (they are round like an apple instead of pear-shaped) or water pears for their crisp texture and extreme juiciness.

Even though some varieties are self-pollinating, they will produce better if planted with another variety that blooms simultaneously (a catalog will give you that information).

A European pear, such as Bartlett, can also serve as a pollinator. We grow “Chojuro,” which has a butterscotch rum flavor, and “Hardy Giant,” which has a mild, sweet taste.