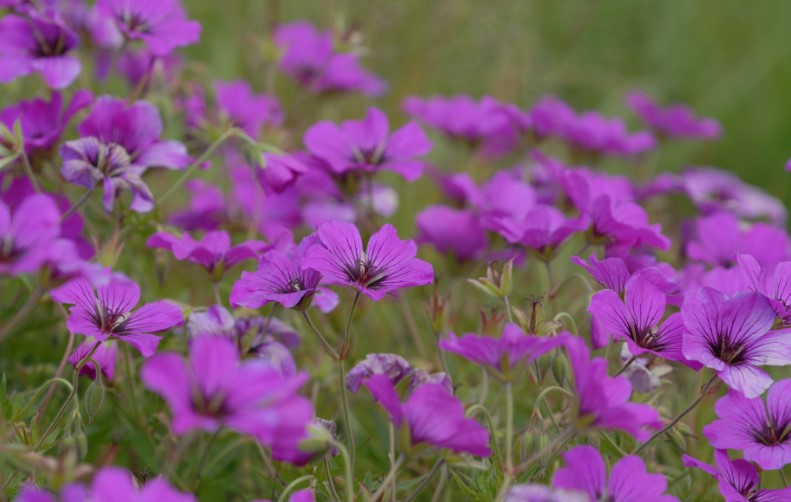 Ask me to name the most dependable, resilient, and versatile plants in the garden, and my answer would be cranesbill geraniums.

Some years are good for roses and others for delphiniums, but every growing season is successful for Geranium.

But the perennial Geranium is a native of temperate regions and a northern gardener’s problem-solver and joy–generous with its bloom, free from pests, and easily maintained.

Most of which are hardy to Zone 4, these relaxed and charming flowers are the backbone of many happy gardens.

Some even have leaves that turn red in autumn.

Known by country folk as old maid’s nightcap or shameface, geraniums have long been used for medicinal purposes and were well represented in the pages of Old World herbals.

A wild geranium herb Robert (see “Herb Robert,” was used in Elizabethan times to edge garden beds, and some modern hybrids are helpful and attractive for that purpose as well.

For slightly taller plants, I like two cantabrigiense hybrids (both 15 to 20 centimeters tall): milk white with a pink-flushed throat ‘Biokovo‘ (a self-hybridizing Balkan cultivar, from G. dalmaticum and G. macrorrhizum); and pinkish mauve ‘Cambridge,’ named for its English breeding site.

The first Geranium to find a place in my garden was an impulse buy spied in another customer’s basket in the nursery checkout line.

The black-eyed, sizzling, magenta-purple flowers of G. psilostemon (90 to 120 centimeters tall) vibrate with intensity, and its leaves turn a brilliant flame red in autumn.

This lanky plant needs a bit of discreet support, but its hybrid descendant ‘Patricia’ (60 to 75 centimeters tall), with black-eyed, magenta-pink flowers, stands up all by herself. ‘

Ann Folkard’ adds chartreuse-yellow leaves and a clambering habit to the black-eyed, magenta-purple color combinations and can weave herself through the lower regions of rose canes.

Long-lasting color is always a bonus with cranesbill geraniums, and they usually remain in bloom for four to six weeks.

My longest-blooming plants are the magenta-purple-flowered bloody cranesbill (G. sanguineum) and its white-flowered sister, ‘Album’ (both 45 to 60 centimeters tall).

All open their first flowers in mid-May; if their soil is kept moist, they’ll keep flowering into August or even later.

I wouldn’t be without that old standby dusky cranesbill (G. phaeum, 60 to 75 centimeters tall) in my garden, also known as mourning widow (each leaf is marked with a small black spot to denote the poor woman’s grief).

IT tolerates the dry shade canopy of woodland trees, putting out dark, nodding, maroon-purple flowers in May and June.

My favorite cultivar of this species is ‘Lily Lovell’, which has a brighter and larger mauve-purple flower with a white eye, but she is hard to find.

When searching for flowers that are adaptable, compact, and long-blooming, consider hardy geranium plants (Geranium spp.).

Some hardy geranium plants have attractive foliage that lasts until nipped by frost.

How to Plant Hardy Geraniums

Growing hardy cranesbills geranium may be as easy as planting and watching it blossom when conditions are somewhat damp.

When considering the way to plant hardy geraniums, think of the location where you wish to plant and choose an appropriate plant for the available sunlight.

Locate the plant where it has room to sprawl, clipping the edges back if necessary to keep it within its boundaries.

Some varieties may be used as ground cover, while others are attractive as border plants.

Brighten the rock garden with various cultivars of the cranesbill geranium flower, which may be as short as six inches (15 cm.) or as tall as three feet (1 m.).

Smaller varieties may cascade from containers. Hardy geraniums should be planted in the way that crown of the plant is at soil stage; planting the crown more deeply may result in the loss of the cranesbill geranium flower.

Hardy geranium care includes the removal of spent blooms and occasional watering for the best performance.

When mature, the cranesbill geranium flower has few insect pests and takes only limited fertilization.

Rich organic soil is usually all the plant needs for optimum growth and flower set.