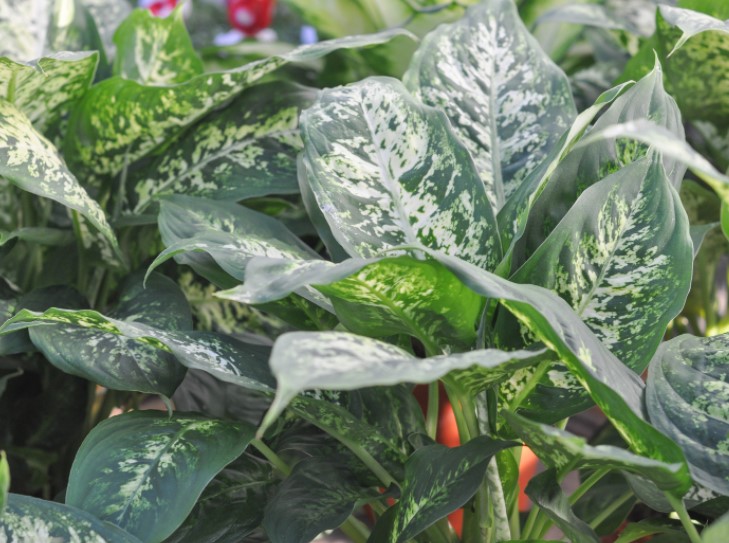 Dieffenbachia is an impressive large-leafed plant. It is suitable for interior landscaping that is both spacious and low in light.

Low light conditions are not a problem for Dieffenbachia, but they will eventually become a little leggy and less sturdy than plants that have been grown in brighter light.

Taller varieties can be top-heavy, and they might topple if not placed in heavy containers. To keep the pot stable, you can place it in a cachepot.

The plant is high in volatile chemicals. Numerous cancer research projects have examined its potential for developing new cancer drugs.

Dieffenbachia, a tropical plant, is native to Central and South American tropical areas. This is an understory plant, so it doesn’t like direct sunlight. The sunlight in a tropical rainforest substory is always heavily filtered.

Care for a Dieffenbachia Plant

This plant likes porous, well-drained soil. A mixture of one-third peat moss, and one-third perlite will work well. It is vital to maintain the soil moist but not too dry.

Dieffenbachia can become ill if the soil becomes too wet. The plant will be destroyed by mould and bacteria.

Dieffenbachia likes heat. This is not unusual for a tropical species. It won’t thrive in a cold environment. The warmer the temperature, the happier it will become.

Dieffenbachia comes with a straight stem, simple (no leaveslets), and alternate (alternate one to the next up the stem). The large, pointed leaves are held by strong branches to the sides of the stem and reach a point.

The dieffenbachia produces spathes, rather than flowers, like its cousins, the spathiphyllum and aglaonema. These are often cut off and not very noticeable; indoor plants rarely bloom.

The leaf tips may turn brown from too much fertilizer or a lack of moisture in the soil. However, dieffenbachia will naturally shed its lower leaves over time.

The leaf tips will turn yellow and curl up, then drop off the plant. When they turn yellow, these leaves are ugly and should be removed.

A mature dieffenbachia can grow to two metres in height. This means that the lower leaves will eventually fall off, and you will have unattractive stems. Cuttings can be taken from mature plants, and the parent plant is then thrown away.

You can cut the top shoots at the terminal and root them in a soilless mixture or water. You can also use pieces of the stem to make new plants.

A stem piece must have an eye to root. It is best to lay a 10-cm-long section of stem on its back and then half-bury it in a damp soilless mixture. Roots will appear in four weeks.

This will ensure that the soil and cutting have plenty of moisture around them. You can do this by putting the cutting in a plastic pop-can — without the cap.

There are many types of dieffenbachia. They range from tiny dwarfs growing less than 30 cm tall to huge giants reaching more than 2 metres. The leaf colour can also vary widely among varieties.

The dieffenbachia leaves are the plant’s claim to fame. They are very showy and beautifully patterned. On their dark green surfaces, the leaves can have white, cream or ivory markings. However, some varieties may have very little green.

D. ‘Topic Honey’ is one example. Its leaves are almost pure gold and have a skinny leaf margin. D. Picta’ is another example, with leaves with a white mid-rib almost entirely.

You can find leaves with blotches, dots or large areas of one colour on their surfaces. Leaves are smooth and shiny, sometimes with some ripples. They can be easily cleaned with a dampened cloth.

Dieffenbachia is a statuesque, easy-to-care-for plant that doesn’t require a lot or too much light.

A dieffenbachia plant is an attractive addition to any interior space, whether it’s a smaller variety used as a tabletop or dish plant or a taller specimen on the ground.

Dieffenbachia is commonly grown in houses, greenhouses, restaurants, and lobbies as a potted ornamental.

All species contain calcium oxalate crystals in the stems and leaves, and even the sap can irritate the skin.

The common name for this plant is “dumbcane,” which could be because the intense burning of the mouth and throat that originates from eating prevents a person from speaking for a while.

For several days swallowing and breathing may be difficult.

The dumbcane identity has given rise to practical jokes with fatal results; if enough has been eaten to cause the tongue to swell and block the air passage, death can result.

Did you find this article helpful? Could you share it with your friends?