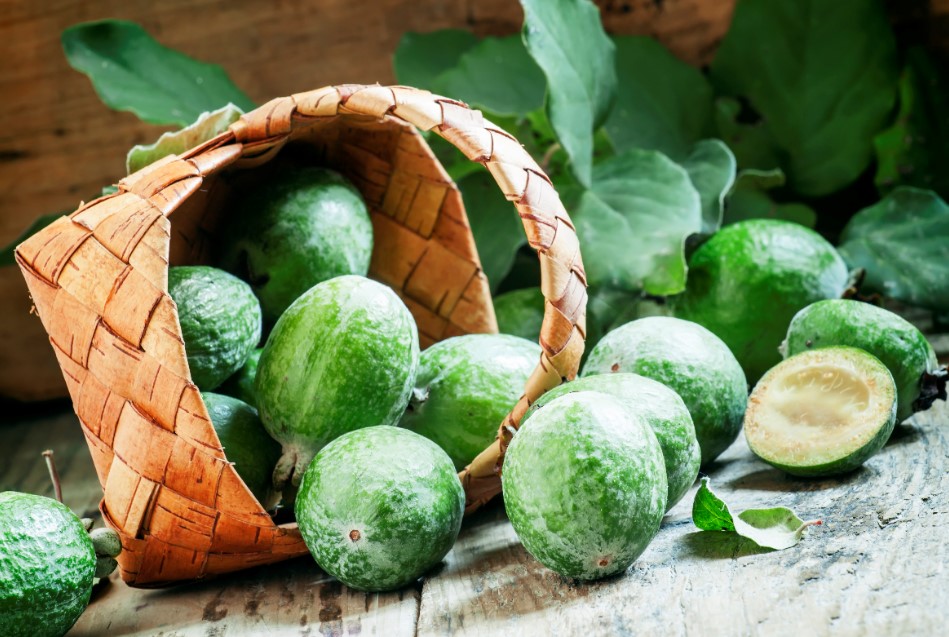 Autumn is feijoa season, and it’s time to either get your excuses ready not to accept proffered fruit or start to investigate tasty ways to eat them.

That’s because feijoa is the zucchini of the fruit world: once the plants start to crop, they are bountiful, and everyone has plenty to give away.

Although it’s not native to New Zealand — it actually comes from Brazil, New Zealand Gardeners have embraced the feijoa almost as enthusiastically as they prize the kiwifruit.

They seem to grow more feijoas than anywhere on the planet and have the recipes to match for jams, jellies, pies, crumbles, and, of course, feijoa chutney.

Just check the web if you think I’m exaggerating. Despite its huge crops, the feijoa (Acca sellowiana), also known as pineapple guava, isn’t a popular fruit in Australia.

It’s time we started to appreciate both the plant and the fruit better as they are versatile and attractive shrubs with a tasty and nutritious — if unloved — crop in autumn.

As well as productive, the plant itself is attractive with grey-green leaves and striking red and white flowers with long, elegant stamens.

The attractive blooms, also edible, appear in late spring and summer. The bush is valuable to grow for hedging or as a shelterbelt. The shrubs are evergreen and dense in their growth.

In the garden, they generally reach 2–3m tall and 3–3.5m wide but can be pruned to be more compact.

Feijoas are tolerant of sea winds and provide year-round shelter or screening. They are salt and wind tolerant, so they make a good first line of defense in exposed areas.

Away from the coast, these tough shrubs also thrive in temperature extremes and even tolerate light frost. As a further plus, they’re also useful fire retardants.

A planting of feijoas is an excellent edible hedge for an orchard and a productive garden on a windy site.

If you’re starting to warm to the idea of a feijoa hedge, autumn is a good time to plant though it’s best to wait until spring in cold zones.

Select a sunny spot with well-drained soil. Plantings should be watered well throughout their first year to ensure good establishment.

Lightly clip in spring to maintain a dense plant. Apart from an annual application of a complete organic fertilizer in spring and keeping weed growth down, they don’t need much attention.

There are named varieties available, but the plants are often not sold with a name or marked seedlings.

Selecting several varieties can extend the harvest period through autumn and can
also improve the fruit set.

A CONFUSION OF NAMES

One of the feijoa’s common names is pineapple guava, which can be confusing as there are also other plants known as guavas, tropical trees native to the US.

Though feijoas are generally self-fertile, cross-pollination can lead to larger crops — which is perhaps not what’s wanted in the case of this, particularly prolific plant.

Among the varieties available in Australia is ‘Mammoth,’ which is self-fertile with large fruit that’s even bigger with cross-pollination.

‘Unique’ is a compact tree to around 2.5m with a generous, early crop. ‘Apollo,’ with medium-to-large fruit, is a late variety and also self-fertile.

I’m not sure why so many people don’t like feijoas as the fruit is easy to harvest and eat.

Consumers may be put off by the egg-shaped fruit’s green skin or that it rarely appears in the supermarket.

If you have a plant to harvest or are offered some this autumn, take the plunge.

Like passionfruit, ripe feijoas fall to the ground. Keep the area around the bushes clear or mown to make it easier to find the fruit, which softens when ripe and develops a lovely scent.

If it has dropped to the ground but feels hard, it will ripen in the fruit bowl.

The ripe fruit is easy to peel or break open. Inside is a cream-colored, slightly pulpy flesh.

Alternatively, cut it open and spoon out the flesh or slice it and eat the flesh.

The taste is a little hard to describe as it’s a mix of fruit salad flavors. As you try to work out the flavor, know you are also getting a beneficial hit of vitamin C.

Feijoas are often neglected, and the entire crop is left to fall to the ground uneaten.

If you don’t want them, at least let the chooks out to forage under the bush or gather them up to take to your local produce swap.

The present study has identified the polyphenolic compounds and vitamins in feijoa (Acca sellowiana) from Australia, including the peeled pulp fruits.

It also contains benzoic acid, an essential amino acid for developing the human immune system, and a high vitamin level.

Increased intake of fresh fruit and/or high-quality fruit products, resulting in increased consumption of bioactive compounds such as polyphenols, carotenoids, vitamins, and dietary fiber, has been suggested as one approach to reducing the incidence of these conditions.

The edible fruit peel contains high amounts of polyphenols and flavonoids and a high proportion of vitamins and minerals.

There is probably a link between the consumption of Feijoa fruits and the health effects on human health and the environment.

Besides, the effects of consumption on human health and the environment must be investigated in a follow-up study.

How To Wrap Furniture For Moving: 3 Essential Items You Need