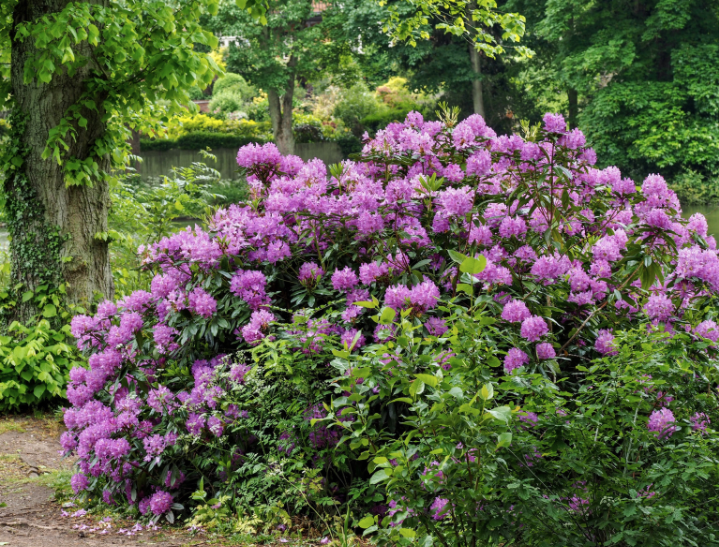 When it comes to getting the right rhododendron in the right place in your garden, there is an excellent rule of thumb I use.

Large leaf varieties enjoy the shade and cope with low levels of light. Conversely, if you want to put a rhododendron in brighter conditions, select smaller leafed types because they cope with higher temperatures and will also cope with greater exposure to wind.

Rhododendrons range from 100-foot giants to dwarfs just inches high, occurring in the Himalayas. Rhododendrons thrive in those mountains. Shallow-rooted, they want moisture in well-drained soil, a combination not found in most places.

They grow well in the American Northwest, not so well in much of the midlands. New England is an in-between place:

Prepare your soil carefully (acidic with plenty of organic material), give them light but not blazing full afternoon sun, make sure they don’t dry out in our frequent bouts of drought (as one of mine did, fatally, I noticed last week).

Knowledge is power in all things, and thus it is with rhododendrons (among which are lumped azaleas, formerly a separate genus until botany had its way).

Rhododendron flowers, and azaleas, which also form part of the genus, are borne in trusses or groups and come in almost every color imaginable.

Since they flower for a relatively short period, it is worth growing these shrubs as much for their foliage as their spring color. Some fanatical collectors are known to grow them primarily for their foliage.

Cultivation is not difficult, so long as some basic rules are followed. They constantly require damp, well-drained, acid soil. As some might suggest, if your soil is salty, you will have to raise your rhododendrons in pots or move house. The salty ground is not worth the struggle.

As with most trees and shrubberies, it is best to plant them in autumn; however, rhododendrons don’t mind being moved or planted any time provided their roots are not allowed to dry out.

Buying your plant in flower from the nursery means you know exactly what you’re getting, but the downside is that you are going to have to be extra- vigilant with water over the coming summer.

Everyone has a favorite, and in early spring, it appears ‘Christmas Cheer‘ comes high on the most-popular list. A small, slow-growing shrub of neat habit gives a good show of delicate pink blooms just when you reflect winter will never end. 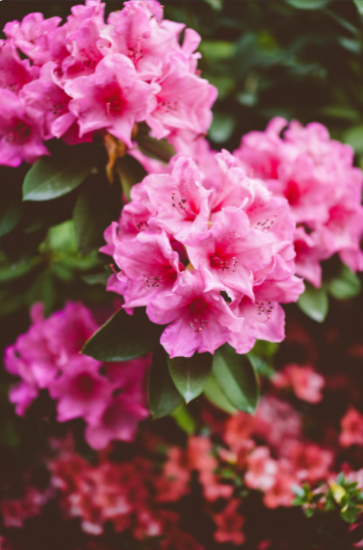 Just as ‘Christmas Cheer’s’ flowers come to an end, ‘Cornubia’ starts up with clear scarlet-red flowers born in large trusses. Considered by most of us to be among the finest reds, it also has handsome dark green vegetation and grows to about two meters.

‘Seta‘ is slightly different, with white and pink bell-shaped flowers on a smaller plant. It does require some protection from frosts, so it needs to be grown against a wall or under some sheltering larger shrubs.

Protection is also needed for the semi-dwarf white-flowering ‘Snow Lady.’ This easy-to-grow variety is a good beginner’s rhododendron but is also vulnerable to severe frost.

Can Rhododendrons Be Pruned?

Yes. But it’s better to move the plant permanently if it has outgrown its spot under the picture window. Rhododendrons are easy to move because their roots are densely clustered and close to the surface, and there are no tap or feeder roots.

How Often Should I Fertilize Rhododendrons?

Never if the plants are doing fine; rhododendrons are low-maintenance plants that need neither pruning nor feeding. On the contrary, over-fertilizing (and over-pruning) can kill them.

But if your shrub looks like it needs a boost, Brooks recommends using equal parts Milorganite, superphosphate, and commercial acid fertilizer, a handful per shrub.

Should I Remove Spent Flowers?

You don’t have to. Done correctly, deadheading keeps the shrub from seed and improves vigor. But it must be done immediately after flowering, and you have to snap off just the dead flower head, not the new growth behind it, or you will lose next year’s flowers.

Yes. Because of their shallow roots, rhododendrons love a layer of organic material over their roots to keep down weeds and preserve moisture. But use a coarse mulch — bark or pine needles — not fine material like grass clippings that don’t let air in.

And never mulch with peat moss to mulch anything, no matter what the package says.

What are Easy But Spectacular Rhododendrons Recommended For The Beginner?

New varieties are constantly coming on the market. Among large growing rhododendrons, ‘Vivacious’ is a new knockout red hybrid from Canada, and it’s the picture of vigor.

‘Wyandanch Pink’ and apricot-flowered ‘Scintillation’ are two of the best of the Dexter hybrids.

‘Yaku Princess’ is a great slow-growing rhododendron (2 feet in 10 years) for small spots. The flowers are warm pink. ‘PJM’ hybridized by Weston Nursery is a small to medium plant with hardy dependable bloom.

Just don’t plant this early blooming purple shrub in front of a brick house. ‘Laurie’ is a new Weston pale pink variation with the same virtues and softer color. ‘Molly Fordham’ is white.

Try white-flowered ‘Northern Lights,’ which withstands minus 40-degree temperatures for freezing climates. I for freezing weather are not evergreen, however. (Not all rhododendrons are.)

For the pale yellow flowers now in vogue in large-leafed evergreen rhododendron, try the new ‘Goldfort.’ ‘Hong Kong’ is a primrose shade. ‘Hello, Dolly’ is a popular peach.

The best fragrance is to be found among deciduous azaleas (a subgenus of rhododendrons), particularly native sweet azaleas or swamp azaleas, which like wet areas. Again, Weston is a leading hybrid of these.