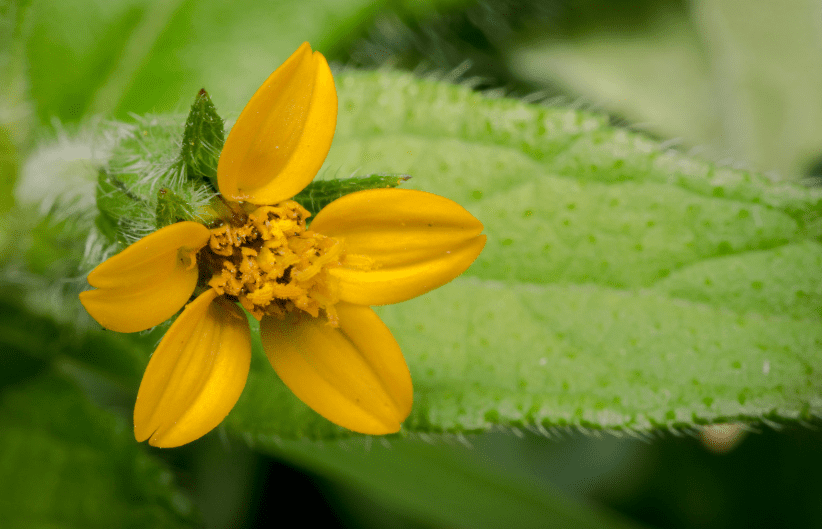 Golden Star, also known as Chrysogonum virginianum, if provided with enough light, this plant can produce golden-yellow flowers for the majority of the summer.

The golden star is one of the cutest native American groundcovers. For the landscape, ground-covering plants are constantly in demand.

Too often, those selected are the overused and available ones such as liriope, ophiopogons (monkey grass), English ivy, Euonymous, or a few others. Golden star can fill this need too.

This plant is relatively new to our regional use but is such a popular plant in other areas that the supply cannot keep up with the demand.

Its popularity stems from its low, ground-hugging growth of 6 to 8 inches, yellow spring flowers, and freedom from pests.

How to Grow Golden Star

Golden star spreads by stolons which bear triangular leaves 1 to 2 inches long. Plants form a dense mat of lustrous semi-evergreen leaves, and one plant can extend from 12 to 18 inches.

Its growth is moderate, but some selections spread more rapidly than others.

Many catalogs say golden star flowers all summer, but this is not the case in our region, where the peak comes in the spring, with periodic flowering in May and June that stop with the heat of summer.

Northern strains in northern gardens do flower all summer.

The five-petaled flowers are up to 11/2 inches across with tips slightly notched. They somewhat resemble a small-flowered single zinnia.

The bloom has a small brownish center. Flowering is on short stems above the foliage. This appearance has prompted some to describe its flowers as gold jewelry placed in a green setting.

The golden star is a member of the aster family and is native to the eastern part of the United States from Pennsylvania to Ohio, south to Florida, and west to Louisiana.

There it grows in open, moist woods, clearings, and on barriers. Another commonly used name is “green and gold.”

It can be grown in full sun, provided the soil is well-watered. Or it will perform well in the light shade — especially partially filtered shade under trees such as honeylocust or other high-canopied trees.

These plants are not too fussy about their soil as long as it is moist and well-drained. Their drought tolerance is marginal, and it is necessary to water when it’s hot and dry.

They seem to grow well when not pampered with frequent fertilization. Plants also seem to benefit from periodic disturbances every few years, such as dividing.

Do it in early spring or autumn; you can propagate this plant from cuttings taken in early summer.

Even though golden stars form tight mats of plants and some seeds germinate, it’s not considered invasive.

No severe pests appear to bother it. Some authorities report mildew, but most people never experienced any problems with that.

It also can be planted at entrances to wooded paths, along woodland edges or shady walks, or beneath shrubs and trees. The golden stars can also thrive on moderate slopes and rock gardens.

There are two strains of the golden star.

The northern, Chrysogonum virginianum grows taller and is reputed to be more floriferous.

The southern form, C. virgininaum australe, is said to be more prostrate, spreads faster, and has fewer flowers.

Some of the cultivars and sources in the nursery trade are the following:

`Springbrook’ – the most compact grower, 4- to 8-inches tall; Twombly Nursery.