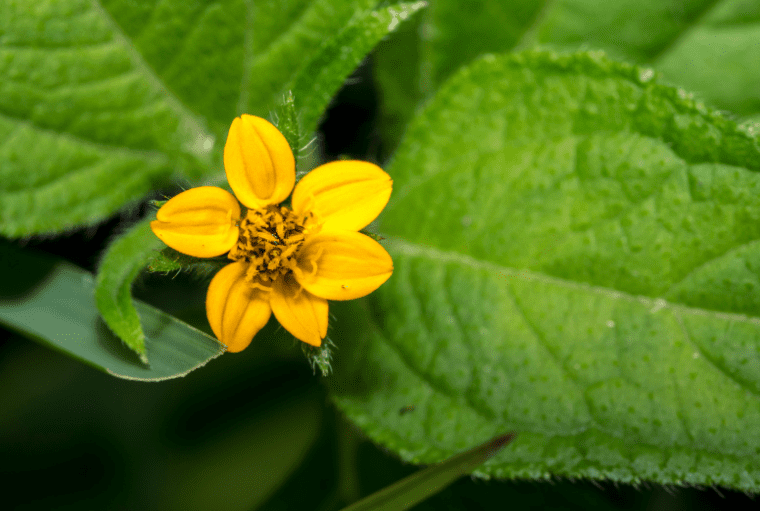 GoldenStar, Chrysogonum vir­ginianum (kry-SO-go-num or, if you prefer, kris-SOG-o-num) is hard to miss, for it blooms for up to three-quar­ters of the year. It adapts well to gardens in USDA Zones 5 or 6 through 9.

Goldenstar greets spring as a mound of dark-green leaves liberally flecked with inch-wide, sunshine-yellow daisies. The leaves are round to heart­ shaped, scalloped, and often slightly fuzzy.

At this diminutive butterball stage, Golden star makes a superb footlight for an ensemble of red tulips or grape hyacinths (Muscari species).

A single plant will light up a rock garden or bring an unexpected glow to a shady nook; a dozen will turn a walkway into a beam of cheer.

With summer’s approach, golden­ star takes on a lounging appearance, its prostrate stems elongating t.o a foot or more and tangling into a dense mat six to eight inches high.

Its flowers now perch at the top of short stems ascending from joints between opposing pairs of leaves. Indeed, the plant’s name comes from the Greekcbrysos, meaning “golden,”
and gonu, meaning “knee” or “joint.”

After the initial flush of bloom, the plant’s deep-green foliage remains lightly sprinkled with yellow stars until late autumn brings a hard freeze.

In the Deep South, flowers occasionally appear in the dead of winter. In most areas, the foliage returns to a clutch of basal leaves. North of Zone 6, winter protection is advised, especially where snow cover is lacking.

The cultivar ‘Piccadilly,’ a low, prostrate form with exceptionally dark foliage, is hardy in New England (to Zone 5, perhaps) if given a protective covering of pine boughs for the winter.

In addition to ‘Piccadilly,’ culti­vated forms include ‘Allen Bush,’ a rapid spreader especially suited for use as a groundcover, and ‘Mark Viette,’ a less robust but more floriferous selection.

Goldenstar performs best with the morning sun or bright shade. It turns to toast in the afternoon sun unless you water it faithfully.

However, if the plant is bogged down in wet clay or smothered by a soppy mulch, it becomes easy prey for southern blight (Sclerotium rolfsii).

A raised or sloping site with a well­ drained, moisture-retentive mixture of organic matter and sand affords a mea­ sure of protection from both thirst and disease. It encourages the plant to self-sow with gratifying abandon.

The golden star is easily propagated. After blooming, each of the five ray flowers produces a rectangular, cigarlike seed, or achene, at its base. Collect the seeds as soon as they turn brown, and refrigerate them in a sealed container.

Wildflower expert Andrea Sessions, of Sunlight Gardens, in Ten­nessee, recommends stratifying the seeds in moist sphagnum in the refrigerator for five weeks before sowing.

Another way to propagate Goldenstar is to take stem cuttings any time from April to September. They will root readily in moist sand or perlite. A third, equally simple method is to divide mature clumps in spring or fall.

Although I may never encounter wild Goldenstar in my neck of the woods, it is only a minor deprivation, for I can relish this versatile little daisy in my yard from March until November.

Calla Lily Plant: How to plant and take care of it?