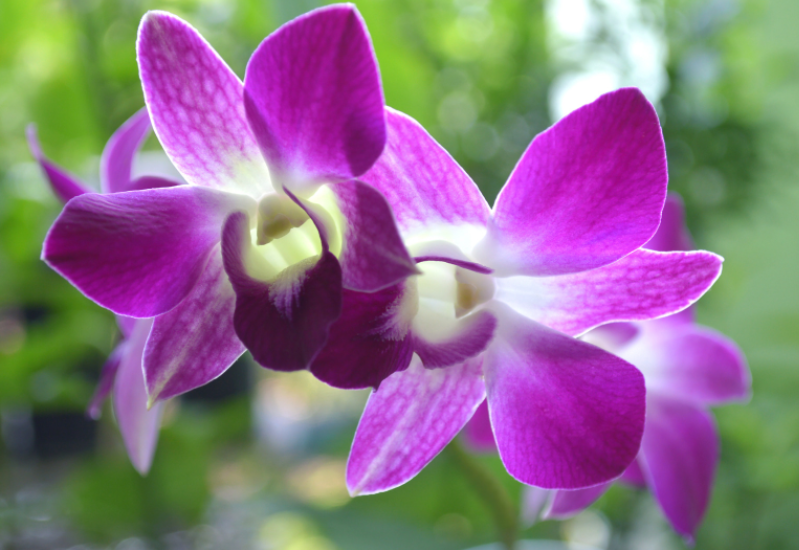 Dendrobium plants are members of the orchid family and it’s a bit of unnecessary repetition to refer to them as dendrobium orchids: but it’s usually done this way.

They are commonly known as ‘greenhouse orchids’ but are probably more often found as house plants nowadays, and they are widely available in the house plant sections of garden centers. 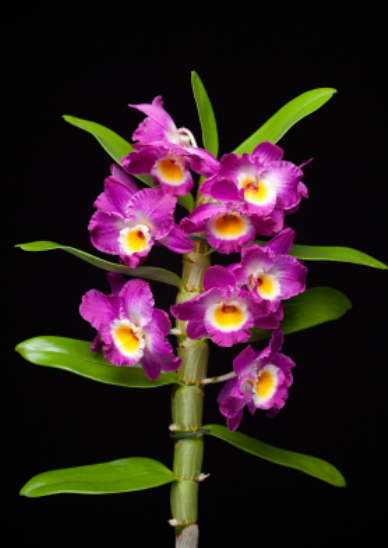 Still, provided the plants are never left trapped behind the curtains on a winter evening and are kept well away from any draughts, they’ll have a good chance of surviving in a warm living room.

These orchids are very good at removing chemical vapors from the air … and yes, almost everyone has chemical vapors in their living rooms, from the carpets and the upholstery to the cleaning agents and polishes, the chemicals including things like alcohol, acetone, and formaldehyde.

They are also good at resisting the infections that plague many house plants, provided the atmosphere is not too dry, and they are not given too much water.

Dendrobium orchids have one habit that is of no real concern to householders but is, nonetheless, rather unusual; they take in carbon dioxide and release oxygen during the night, the reverse of when most plants do it.

But remember, read all about it below and after… keep the care instructions!

Dendrobium orchids make excellent houseplants and are relatively easy to grow, though they are somewhat fussy about their environment.

As with most orchids, dendrobiums prefer to be grown in a medium that drains quickly.

The best is a medium-sized fir bark mix that has been developed specifically for use with orchids. Sometimes additives such as charcoal, perlite, and sphagnum moss are also used.

Many growers have their own particular recipes, but a mixture of about ten parts bark to one part perlite and one part charcoal works well.

Pre-made mixes can be purchased where orchids are sold.

Water and feed your orchid frequently during the growing season but less regularly during winter.

These plants typically send up at least one new upright cane each year. Avoid cutting off old canes, as they contain nutrients and water necessary for the orchid’s health.

Additionally, old canes occasionally flower or produce tiny plants known as keikis (pronounced “kay-keys”) that can be potted on their own once they develop roots.

The flower sprays bloom for approximately six to eight weeks and make excellent cut flowers. Your plant may bloom multiple times per year under ideal conditions.

If blooming appears to be less than optimal, try increasing the light available to your orchid.

In nature, these plants thrive in partial sunlight. However, they’ll likely need to be near the brightest window to bloom well indoors—preferably a south-facing window.

Keikis can indicate that the plant is not receiving enough light. On the other hand, if you notice yellow leaves, you may have provided the plant with excessive direct sunlight.

Orchids do not grow in standard potting soil but in a unique mixture closely mimics their natural habitat. Utilize a commercial orchid potting medium of peat moss, perlite, or fir bark.

Alternatively, you can make your own using those ingredients. Assure that the medium is aerated and well-draining so that the roots are not left in excessive moisture for an extended time.

These plants like moisture during the cultivating season but should not be allowed to sit in a saturated medium. Excessive watering can result in root rot, which eventually causes the plant to yellow or wilt.

Stick your finger in the medium to determine when to water. If it feels damp, wait until it has slightly dried before watering.

You can extend the time between regular waterings during the winter months but do not allow the medium to dry out completely.

Dendrobium orchids thrive in warm climates and require a constant temperature of at least 60 degrees Fahrenheit.

While they may be able to tolerate slightly cooler nighttime temperatures of up to 50 degrees Fahrenheit, prolonged exposure to cold is not recommended.

Additionally, they prefer a humidity level of 50% and 70%. (with a minimum of 45 percent ). Brown leaf tips could indicate that the air around your orchid is too dry. 2

Dendrobium taurinum: Flowers range from lavender to purple and have horn-shaped petals.

Supported in Java and Sumatra at altitudes of 200 to 1000 meters as a medium-sized, hot to warm spreading epiphyte with erect in youth growing into pendulous with age stems which are leafy below and leafless above, and bearing ovate, acute, imbricate petals that flowers in the fall, winter, and first spring on new stems from the apice and on established plants from along the leafless apical segment with individual flowered, short inflorescence.

Dendrobiums, like many other plants, can be divided. This is the optimal time when new growth has begun, and new roots are visible.

When dividing, ensure that each division retains at least three to four stems (also called canes).

Another method is to pot up the small plantlets that develop at the ends of older canes. These are referred to as keikis, a Hawaiian term that translates as “small plants.”

A third technique is to cut older canes between the nodes and place them on moist sphagnum moss.

Most dendrobiums prefer to be underpotted (planted in small containers), as their roots are typically short, thin, and wiry.