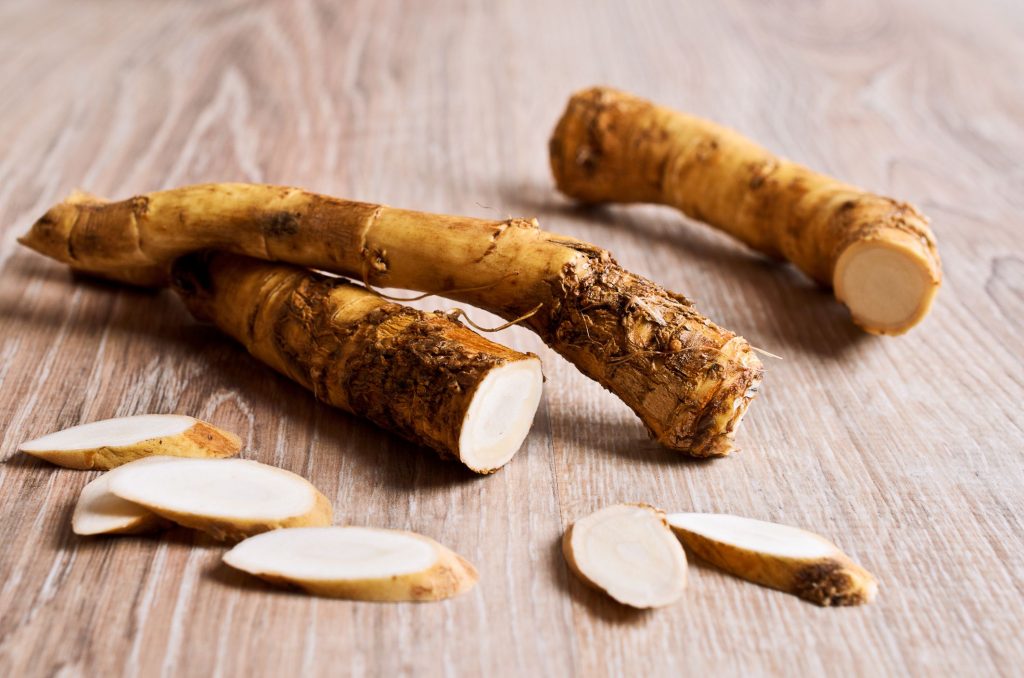 The horseradish plant is a perennial root herb from the mustard family, including wasabi, broccoli, and cabbage.

It comes from southeast Europe and western Asia but can now be grown around the world. The root has no noticeable smell until it’s cut open, after which it releases oils that irritate the nose and eyes.

It is another plant that has been harvested for thousands of years for its medicinal properties, and it was used to accompany meat across Europe in the Middle Ages.

Armoracia rusticana, its scientific name, is originally from southern Europe. There is evidence that it has been used since antiquity.

Once it made its way to central Europe, horseradish spread across the continent and worldwide.

Introducing flavor to the often-bland food was not so easy back then— pepper and other spices weren’t readily available, not even for kings and royal families.

Horseradish became the first common spicy addition to foods, and people fell in love. Even today, this spicy root is an integral part of many cuisines, especially in regions where it is grown.

In some regions of the world, you can still see wild horseradish on the menu. In central Europe, Ukraine, and in western parts of Russia, you might even come across horseradish while walking through nature.

Horseradish is an incredibly robust plant and can survive freezing temperatures, withstanding up to -58ºF (-50ºC)! The leaves do die off over the winter, but the roots (the most crucial part) still survive.

Horseradish plants can be grown from seeds, but it is easier to raise new plants from slivers of the root, which are available from specialist growers.

Fill pots with multi-purpose compost and drop in the slivers so the tops are below the surface. It works best in areas with long growing seasons and winters cold enough to make the plant dormant.

The first autumn frost kills the leaves, so the primary root is immediately harvested. Any offshoots are replanted for the following season.

It can become invasive if left unattended in a garden.

Harvesting regrown horseradish is very simple. The root is fully grown when the leaves above the soil begin to wither. This is a good sign to start harvesting. You can pull the roots out of the ground.

If you’re not ready to eat it yet, you can leave the root in the soil. This doesn’t affect the plant. Freshly harvested horseradish is traditionally paired with hearty foods.

Because I don’t eat meat or fish, I use it combined with potato or cabbage dishes. It would help if you didn’t cook horseradish for any reason.

It can be cut or grated raw— this is the only way to maintain its spicy flavor.

Horseradish is the main ingredient in the fiery, creamy sauce that accompanies roast beef, cold ham, and many types of cooked fish.

It can also be grated into coleslaw to provide a sharp kick. As wasabi isn’t very common in the UK, green food coloring is added to horseradish to make the condiment popular in sushi bars.