Gardenfrontier
Home Recipes and Cooking Healthy Recipes What Is A Shallots? Plus 4 Delicious Recipes
Twitter10Facebook1PinterestSubscribeShare
11
SHARES 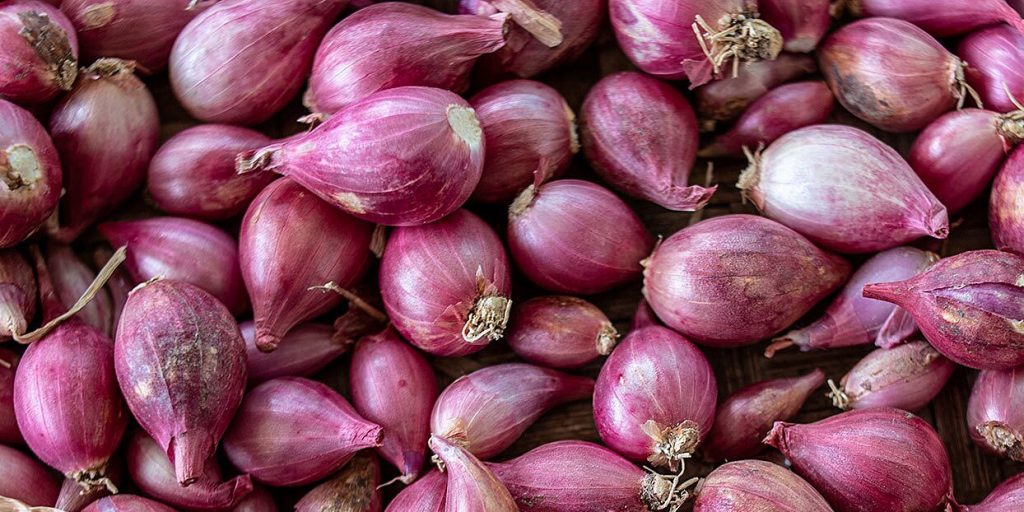 THEY are not baby onions, as many people mistakenly think. Instead, they are members of the allium family — like the onion — but grow in clusters, like garlic bulbs. They are usually off-white in color, sometimes with a pinkish hue, and are more expensive and much smaller than onions, but their advantages are numerous …

WHERE DO I BUY THEM?

BRITISH shallots have just come into season so that you can find them everywhere.

THEY are richer and sweeter than one slight taste of garlic — and they are than onions, so a little goes a long way. They caramelize really well, becauwater content is lower than that of one. They become stickily sweet very easily. They are fantastic pickled or roasted, too.

HOW DO I USE THEM?

BECAUSE of their low water content, shallots do not disintegrate, so they are fantastic in casseroles. And because the layers are so tightly packed, they are easy to cut into tiny pieces, which makes them perfect for scattering over a tomato salad or using in a dressing or sauce or for frying quickly for a curry.

Try roasting peeled shallots whole, tossed in equal amounts of honey and olive oil, for around 20 minutes, and serve with roast beef or chicken.

Once “scallions” get mentioned, you can forget having a dispassionate discussion about which onion relatives are which.

Some food authorities and dictionaries maintain that ignoring the confusion with shallots, scallions are nothing more than immature onions.

Others, such as Waverly Root, have said with some testiness that while such “green onions” look a lot like scallions, there is a different plant, Allium fistulosum, which is a scallion.

In the interest of sanity, let’s skip the scallion question altogether and stick to shallots. As Voltaire so wisely put it, we must cultivate our jargon.

Unfortunately, abandoning the scallion to its own devices does not get us completely out of the mud. There is more than enough confusion about the shallot alone.

First of all, there are (naturally) several kinds of shallots, and the reddish one common in the United States is said (naturally) to be the coarsest in flavor.

The French (naturally) prefer what they call the white shallot (naturally) gray. At least they don’t go as far to demean our shallots as they do with our cinnamon, which they refer to as “bastard cinnamon.” But I digress.

Second, if we care about the history of the shallot, we can get good and confused there, too. The Roman naturalist Pliny the Elder is supposed to talk about the shallot when he referred to a plant described by the Greek philosopher Theophrastus 350 years earlier.

Pliny added that because Theophrastus used the word “askalonion,” the plant was from Askalon, now spelled Ashkelon or Ashkelon, a town on what is now the southern coast of Israel, near the Gaza Strip, and which various food references describe as then being “in south Palestine,” “in Judea,” “1 of the five royal cities of the ancient land of Canaan,” and “one of the city-states of the ancient Philistines.” It’s nice to have that much nailed down, anyway.

Although according to Root, the plant that Pliny describes sounds like the ordinary onion, not the shallot, it has somehow become accepted that the word “shallot” comes from Askalon, although “scallion” sounds a lot more like Askalon than “shallot” does. Thus, anyway, comes the shallot’s Latin name, Allium ascalonicum.

A further complication in the shallot’s pedigree is the widespread assertion that it was introduced to Europe by crusaders coming back from the Holy Land. According to Root, an otherwise reputable reference book makes that claim and names as its source Pliny, who had been dead about 1,000 years at the time of the First Crusade.

So what is a shallot, and why do you want to eat one? It is a vegetable with a flavor that, while onionlike, is usually described as subtler and milder than an onion. In structure, it consists of several bulbs, somewhat the way garlic is shaped, but each bulb is multilayered, like a small onion.

As with onions and garlic, shallots should not be stored in the refrigerator but in an excellent, dry, well-ventilated spot.

Don’t buy lots of shallots with the idea of saving them for use at some indefinite later time; they dry out rapidly.

Peel shallots as you would onions before chopping them. Shallots vary in size, but for an estimate when buying them, each bulb yields approximately 1/2 to 1 tablespoon when chopped.

None of the following recipes is overwhelmingly shalloty in flavor, but nothing stops you from increasing the number of shallots.

Lacking shallots, you could substitute green onions or scallions or whatever you call them.

You could also omit the shallots altogether – but then why have you read this far?

This is a rich and delightful appetizer.

Stir the heavy cream into the sour cream. Set aside.
Melt one tablespoon of the butter in a frying pan. Add the shallots and frizzle for 2 minutes.
Add the mushrooms and saute an additional 2 minutes, then cover the pan and cook 5 minutes more.

Add the cream mixture, stir and simmer, uncovered, for 10 minutes. Season with salt and pepper to taste.

Meantime, expand the remaining butter on both sides of the bread slices and briefly toast them in a big frying skillet until they are lightly browned.

Serve the toast with the mushroom sauce poured over it or as a slightly messy spooned-on dip.

This souffle recipe is adapted from “Better Homes and Gardens Classic International Recipes.”

Grease a 2-quart souffle dish or oven-safe bowl. Preheat the oven to 350 degrees.
In a frying skillet, cook the shallots in the butter until they are tender but not browned. Stir in the flour and salt and cook, stirring, 1 minute.

Add the milk gradually, cooking and stirring until the milk is incorporated and the mixture is thickened. Stir in the cheese.

Beat the egg yolks lightly. Stir a few spoonfuls of the hot cheese mixture into the beaten yolks, then return the diluted yolks to the pan of cheese mixture. Stir in the artichokes.
With clean washed beaters, whisk the egg whites to the point stiff peaks form.

Fold the whites and yolk mixture together. Pour into the prepped dish and bake for 50 to 60 minutes, until a knife inserted halfway between the edge and the center gets out clean.

There are zillions of dishes into which shallots can and do go, but two classic French sauces are so closely identified with shallots that they must be mentioned.

One, sauce Bearnaise, is a Hollandaise-like item, rich in not-particularly-well-heated egg yolks. Delicious, but because raw eggs might be contaminated with salmonella bacteria these days, a bit dicey for the young, the elderly, and the pregnant.

So let’s skip to the other – just as rich, cholesterol-laden, sinful, and tricky to make, but fully eggless.

This sauce cannot be kept warm or reheated; it must be made just before it is served. Serve it with fish, shellfish, or green vegetables such as asparagus or broccoli.

Remove the mixture off the heat and allow it to cool for 2 minutes. Add salt and pepper.
Beat in 2 pieces of butter. As the butter begins to cream into the shallot mixture, add another element.

Over the very lowest heat, beating continuously, add a piece of butter each time the previous one has almost entirely disappeared into the sauce. The sauce will be thick and creamy.

Remove from the heat as early as all the butter is beaten in, pour into a warm – not hot – bowl and serve. Serves eight or more. Chill any leftovers and use as seasoned butter – on vegetables, etc.

Do not try to keep the sauce hot: It will turn into melted butter. If that happens to you, put an empty bowl in the freezer for a few minutes, pour a few tablespoons of the separated sauce into it, beat them until they become creamy, and very slowly top in the rest of the sauce.

Here’s a simple recipe to illustrate the simple use of shallots. You could make up recipes like this yourself, but if you’re more comfortable with an accredited source, this one is from Craig Claiborne’s “New York Times International Cook Book.”

Cook frozen beans according to package directions or fresh beans in lots of rapidly boiling water for 8 minutes. In either case, cook the beans only until they are barely tender. Dry the beans, rinse them in cold water and drain them again.

Put the beans in a frying pan and stir them over medium heat to evaporate the remaining water. Add the butter and shallots and cook and stir until the beans are hot and well-coated.

Salt and pepper to personal liking and sprinkle with lemon juice and chopped parsley.