Beware of The June Bug 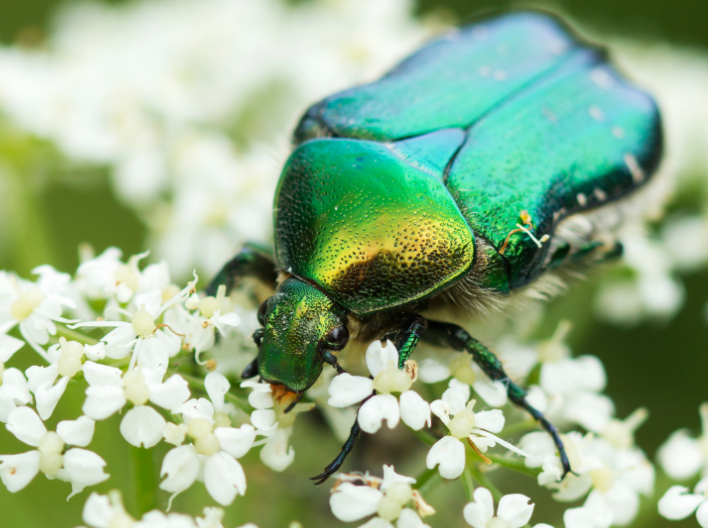 What are June bugs? Is it a beetle that only comes out in June and then dies? What exactly is it?

According to the World Book Encyclopedia, June bugs are also known as May beetles or June beetles for the time of year they emerge as adults from their subterranean growing stages.

Attracted to light, June bugs are usually seen at night and eat young leaves from trees and shrubs.

June bugs, members of the scarab beetle family, lay their eggs in the ground in meadows, gardens, and fields.

World Book states that as larvae, the large white grubs with a brown head remain underground for two to three years, feeding on roots, grains, grasses, and vegetables.

According to the Columbia Encyclopedia, June bugs then pupate in the fall and emerge as adults in spring.

How To Get Rid oF June Bugs

The June bugs are attracted to light, so you might add a bug light zapper to attract them. This will kill the adults.

Spraying with Bayer Advanced turf and tree spray should kill the existing bugs. Spray three times. Space the first two sprayings a week apart, and then spray again after a month.

Do not spray if you plan to follow the advice in the next paragraph.

I read that the beetles are quite nutritious and tasty if cooked right. The key is to roast them until the shell snaps.

This indicates the bug is dead, and the interior is cooked. The snap is not as loud as a popcorn pop but a definite snap. The amount of June bugs a person can capture in one night with a light trap can be as much as half of a 5-gallon bucket.

An article in Wilderness Way magazine: Volume 2, Issue 4 says: that June bugs can have the “flavor of raw molasses or ribbon cane syrup.” “Crushed into a fine powder, `bug-flower’ added to hot water forms a rich nourishing drink.”

They can also be eaten like pistachios; take the hull off first. This might be something for the organic-vegetarians to think about.

What Do June Bugs Eat

As if that’s not sufficient, mating June Bugs are now developing white grub larvae, the initial stage in the beetle’s life rhythm.

These grubs feed ravenously on the roots of plants and will come back next spring to wreak widespread destruction to lawns.

Some people think that June bugs bite but they actually do not. Instead, they prefer to eat on the leaves of trees, bushes, and flowers.

How Long Does A June Bug Live

People only notice June bugs during May and June (earlier in the south) because this is when they are full-grown and have developed their wings. After June, they die.

The half-inch long adult night feeders appear after the trees have produced leaves and come out at dusk to munch between the veins of leaf tissues, leaving nothing but a lacy skeleton.

During June and May, the adult females enter the ground and deposit about 50 eggs in earthen balls.

The little eggs turn into larvae that feed on the roots of plants just below the frost line. Most avid gardeners would know them as the destructive white grub.

The grub is fat and whitish with a brown head that curls into a c-shape. It is found four- to-six-inches deep into the soil.

According to a website about white grubs, they feed on grass roots without damaging the roots of trees and ornamentals.

But apple, crab apple, elm, some maples, linden, plum, and roses are all at risk. Although the damage is unsightly, healthy plants will tolerate extensive defoliation without severe damage to the tree.