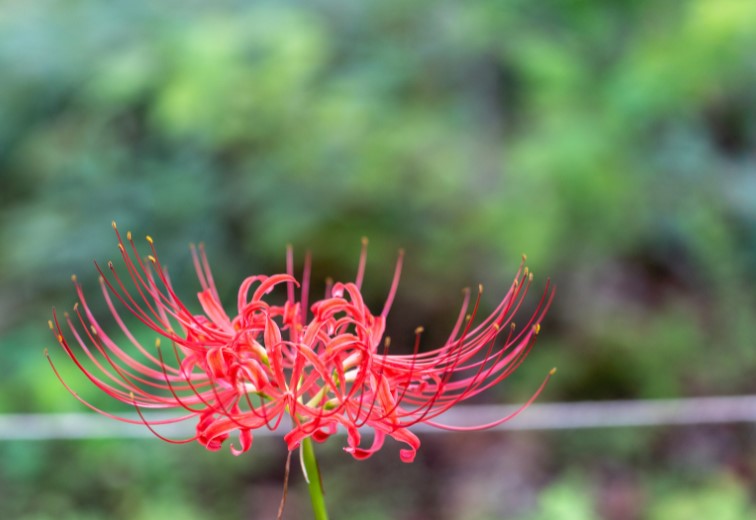 Might you be a risque gardener? If you grow Lycoris (related to the amaryllis), the genus has the common names “naked ladies” or “naked boys.”

Less racy names include Magic Lily, Hardy Amaryllis, or Autumn Amaryllis. Better yet, refer to it by its Latin genus – Lycoris.

Similar to amaryllis, the flower stalk does not appear at the same time as the foliage. Flower stalks appear in late summer. The following spring foliage emerges and withers by May, similar to the autumn colchicum.

Without foliage most of the growing season, Lycoris is best planted interspersed with plants such as hellebore, hosta, and epimedium.

The leafless stalk makes it essential to plant with other perennials that have good late summer foliage. Alternatively, Lycoris could be planted in a wildflower garden.

The genus name honors the Roman mistress of Mark Anthony. She was noted for her intrigues. The disappearance of the foliage in the late spring and the appearance of flowers in the fall is the intrigue of the Lycoris plant.

Most Lycoris are native to China, Japan, and Southeast Asia. Twin Tier gardeners must be careful in selecting these bulbs, as some are not likely hardy here. L. squamigera displays rose-lilac or pink blooms with a lily-like flower.

It is one of the hardier Lycoris. The white form, L. longituba, could, at first glance, remind one of an Easter lily.

Differing reports describe L. radiata as being hardy or not in zone 5 (minus 15 degrees). This is reason enough to become acquainted with the genus by planting other species before testing L. radiata in the Twin Tiers.

Bulbs of Lycoris multiply readily, so they may be dug after the foliage withers in June or July, divided and replanted or shared with friends. I do not recall seeing Lycoris bulbs or plants in area garden retail stores.

The six straplike petals curve back as a backdrop for six showy stamens and a pistil as long as the petals.

Both of these flowers open to 3 inches across. L. sprengeri is quite a surprise lily, if only for its color.

Planting And Care Of Lycoris

Petals are predominately light lilac with dark lilac veins and a touch of blue at the tip of each petal. Flowers are on stalks just over a foot tall. The hybrid L. haywardii also flowers at 12 inches tall with pink blooms.

All these Lycoris prefer a hot, dry summer dormant period. Planting and transplanting should be done during the summer dormant time, June through August.

This shipping and planting time is out of the cycle of most other bulbs and possibly accounts for their scarcity. Because of this, we infrequently find them on the shelf of mass-market retailers.

Bulb size varies depending on the species, from an inch to more than 4 inches in diameter. Plant the bulbs twice their diameter deep in partial or full shade. Avoid sites receiving any afternoon sun. A moist location is ideal.

A layer of organic mulch is also helpful. As with most other bulb flowers, their pest and disease problems are minimal.

Lycoris are sometimes seen as cut flowers at florist shops. Blooms on cut stems seem to last longer than the same flower left on the plant. This is likely because of the hot weather outdoors when the flowers open.

Lycoris is somewhat exotic and when planted in your perennial border could become a show-stopping feature there.

Stop the grubs: The next two weeks are the time to check lawns for newly hatched white grubs.

If you find less than an average of 10 per square foot, treatment should not be necessary. Their damage will be minimal.