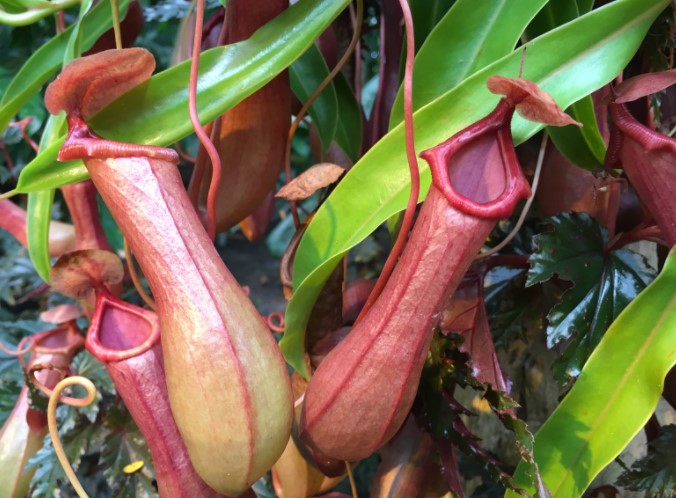 PITCHER plants are fascinating because their pitchers catch, drown and digest insects.
In Peninsular Malaysia, there are three endemic species, all of which grow in the mountains.

Pitcher plants lure insects to their doom with sweet-smelling nectar and long (up to 38 inches), hollow stems.

Once in sects are inside, recurved hairs thwart their escape. The captives drown, and the plant digests their remains.

Exotic, orchid-like flowers in late spring are either hypnotically fragrant or offensive, depending on the species.

The most elegant, Nepenthes gracillima, has particularly slim pitchers. Compared with the other two montane species, it has a restricted distribution found only on seven mountain peaks:

The population at Genting Highlands is particularly important as it is the only one with completely black pitchers.

Indeed no other species produce black pitchers. It, therefore, has commercial value for the horticultural trade and in the past, it has been preyed on by commercial plant collectors.

Pitcher plants are protected under the Convention for International Trade in Endangered Species, of which Malaysia is a signatory.

However, in Peninsular Malaysia trade in wild plants seems uncontrolled.

Besides the threat of unsustainable commercial collection, the black form of the graceful pitcher is in grave danger of extinction from hill resort development.

You should choose a native species to grow pitcher plants.

How to grow a pitcher plant

It is simple to grow these plants if you pay attention and follow these key points. The nutrient deficiencies in the soil that is native to pitcher plants are what cause their unusual shapes and carnivorous habits.

Since the soil in which they grow is nitrogen deficient, the plant captures insects to extract their nitrogen. The soil and the location are key to growing pitcher plants outdoors.

You can use any kind of pot to house indoor plants. However, you should provide low fertility soils in which they will thrive.

The potted pitcher plant, for example, thrives in a mix of peat, bark, and vermiculite. They can grow in small pots or even in terrariums.

The soil should be slightly acidic for outdoor specimens. The pitcher plants need to be kept moist. They can also grow in water gardens.

They need to be able to grow in boggy soil. The best conditions for pitcher plants are the full sun to partial shade.

The care of these plants is very simple. The ideal temperature is between 60-70 F (16-21 C). The favorable time to fertilize indoor plants is at the beginning of the growing season when they should be fed high-quality orchid food.

This should continue until the fall. The majority of the plant’s nutrient requirements come from the insects that they capture in their pitcher-shaped organs.

The care of pitcher plants outside does not require much fertilization. The pitcher-shaped leaves will naturally fall off outdoor plants.

As they fall off, cut them. The rosette base will produce new leaves. Pitcher plants can also be protected from freezing by putting mulch around the base.

Native to North America, they are often poached from the wild, reducing natural populations