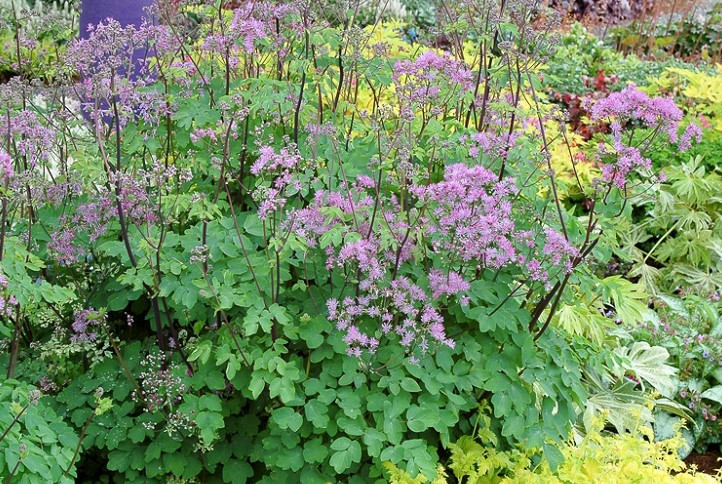 STRUCK, by the way, a group of herbaceous perennials shot up in late spring, the Ancient Greeks called them Thaliktron, from thallein, to bloom, sprout or flourish.

The Romans Latinised this as Thalictrum, which remains the botanical name of these plants, attached to a genus that now contains as many as 200 species worldwide, found mostly in cool and temperate regions and belonging to the buttercup family (Ranunculaceae).

We termed our native species Thalictrum flavum, or meadow rue, from its habitat and its divided blue-grey foliage, which was thought to look like rue’s.

However, the prize for descriptive labeling must surely go to the Americans who called theirs ‘maid of the mist.’

This name encapsulates what it is that makes Thalictrum uniquely valuable in the garden.

The ‘mist,’ I presume, is the foliage, which, in many species, is impressive in volume but gauzily translucent in effect, as intricately cut out as a maidenhair fern’s and in soft tones of sea green and pearly grey.

In its midst and rising above it, the ‘maid’ is the finely branched inflorescence. For grace, poise, and finesse, no other summer-flowering perennials can compare with Thalictrum.

Happily, the taller kinds are robust and long-lived clump formers, flourishing in full sun or part shade in any fertile soil as long as it’s moist from early spring until high summer.

Here are a few of the best varieties of Meadow Rue

T aquilegiifolium: to 4ft, grey-green leaves, flowers a froth of stamens from May onwards, typically rosy mauve, but brilliant white in the sublimely gauzy Splendide White and luminous lilac in the dark-stalked Thundercloud.

T Elin: to at least 6ft, with deep-purple stems, blue-green leaves, and lilac-purple flowers from mid to late summer.

T Splendide: to at least 8ft, with aubergine-tinted stems, mid-green leaves, and vivid-mauve flowers in broad and soaring summer-long sprays.

These bring vital ethereality to classic herbaceous borders, bridging and harmonizing stronger and more solid tones with their perlucidus clouds of color.

Theirs is the dancing lightness that can make a masterpiece of an otherwise airlessly heavy and rich composition.

A few observations, if I may. They tend not to appear above ground until spring is warm and far advanced, so don’t assume that a no-show is a loss.

They seldom need the heavy staking to which they’re often subjected: tie the lower portions of developed stems to short, discreetly inserted canes or do nothing.

They produce just one major foliage flush a year, so cutting down the leaves in summer is likely to leave a lasting gap.

Most importantly, don’t give herbaceous borders the monopoly of these taller meadow rues. They exult in New Wave plantings, prairies, and lightly managed long grass.

And cultivars of T. aquilegiifolium and T. delavayi are a joy interplanted in shrub roses beds and shimmering-plumed grasses such as Calamagrostis Karl Foerster.

Cooler, moister, and more humusy conditions suit T. kiusianum, which is, at most, 6in high but a miniature of massive charm.

It does best for us in dappled shade on the edge of an acid bed full of azaleas and slipper orchids, where it forms lacy pea-green hummocks overtopped by wirypalest-mauve powder puffs.

Finally, T ichangense Evening Star, another shade- and damp loving dwarf to treasure. Resembling an epimedium’s in shape, its leaves emerge in olive and copper and harden to dark chocolate webbed with silver veins.

The flowers are equally lovely, massed in rose-tinted constellations that carpet our bamboo grove and fernery.

Although often no more than 8in high, this maid of the mist has the same precious quality as her taller cousins: ethereality.