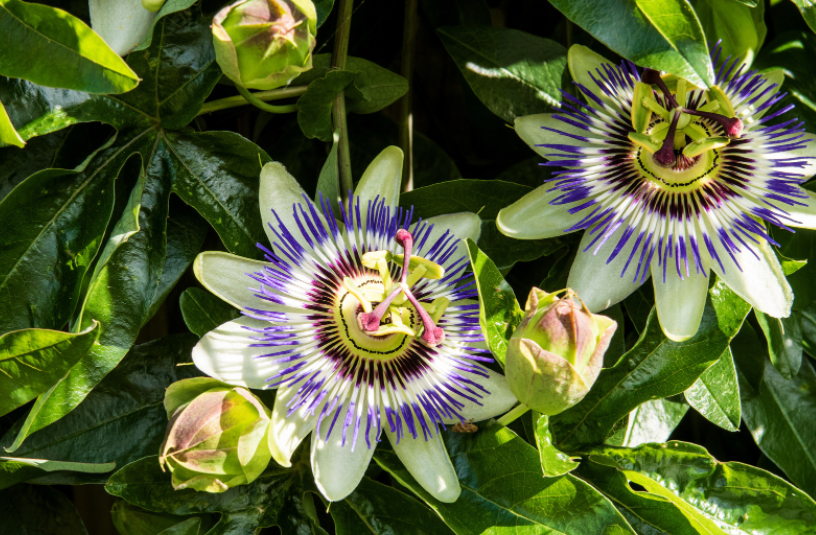 My top conservatory choices are the exotic Passiflora quadrangularish GM. Passiflora x belotii and Passiflora ‘Allardii’. They all have beautiful, intricate flowers and are highly scented.

Passionflowers bloom from May right up to September or October, after which they produce attractive orange fruits, so they have a good, long season of interest.

There is a terrific resurgence in the popularity of passion flowers because they are wonderfully exotic and there are a lot of choices – more than 500 species and 500 cultivars.

Passiflora is not as difficult to grow as many people imagine. They need to get away from the idea that passionflowers need big pots and lots of food and water. They actually thrive on neglect, so they are an ideal low-maintenance plant.

If they are grown in free-draining soil and planted near the house, which provides a milder microclimate, it is possible to grow a much wider range.

We haven’t had much winter frost in the past few years, but we have had a few late touches of frost, which can hit the new growth and kill the plant.

My favorites include Passiflora ‘Purple Haze’, which I have seen doing well in Scotland, and Passiflora ‘Amethyst’ AGM, which survives down to -2″C, providing the soil is free-draining. It doesn’t mind the outside cold or a hot greenhouse

Passiflora is a genus of more than 500 species of mainly evergreen tendril climbers, mostly from South America and the West Indies.

In the wild, they grow in tropical woodland or grassland, using tendrils to scrawl over trees and shrubs, often growing to great heights.

Passionflowers were very popular in the Victorian era, but their popularity took a nosedive during the world wars because people couldn’t afford the glass needed to grow them.

But even though they look exotic, passion flowers are easy to grow and their scented blooms last for months.

Many of the most highly colored species are not hardy and must be grown in a heated conservatory, where they will scramble up to the roof, flowering freely.

But specialists say many half-hardy varieties can be grown outside, given a suitable microclimate – a sunny, south-facing wall and free-draining soil is the key.

In the garden, passion flowers can be grown over a pergola or trellis, or in a pot that can be taken indoors during the winter months.

For fruit like the sweet, juicy variety sold in supermarkets, Passiflora edulis can be grown in a heated conservatory or glasshouse and is self-pollinating.

To grow passion flowers in a pot, keep the roots restricted. They should be potted on regularly, but never increase the pot size too much and water them sparingly during winter, increasing as growth begins.

Feed during the growing season between May and September, using a high potash feed to achieve maximum flowering.

Keep pruning to a minimum after the summer because the growth needs time to harden to endure any cold spells.

Passionflowers bloom on the current year’s growth, so they can be hacked back to keep growth restricted.

Propagation is usually by semi-hardwood cuttings. The seed of cultivars can be used, but the results may be unreliable.

The outdoor passion flowers don’t suffer from pests and diseases, but the conservatory types can suffer from a mealy bug or red spider mite, largely caused by conditions being too hot and dry.

* Passiflora Amethyst’s AGM is vigorous, tough, and hardy to -2 °C. It is evergreen, with darkish green leaves and lavender flowers.

* Passiflora ‘Anastasia’ is a new hybrid, which is hardy down to -2 °C. It is very free flowering with bright pink, red and white flowers from May to November.

* Passiflora ‘Andy’ has scented, white flowers with a purple center. It is a lovely pot specimen that will survive outdoors in milder areas.

* Passiflora Allardii’ is popular for conservatories. It has large, scented, mauve, and violet flowers from April through to October.

* Passiflora x belotii is very free-flowering from May to October, with scented lilac and pink flowers.

* Passiflora caerulea AGM is the most widely available hardy passionflower, with blue and white flowers.

* Passiflora caerulea ‘Constance Elliot’ has white flowers from May to October and edible fruits in autumn.

* Passiflora citrina has yellow, star-shaped flowers. It is an unusual color for a passion flower and makes an ideal small houseplant.

* Passiflora x decaisneana has giant red flowers, as big as saucers. The largest of the passionflower hybrids, it blooms from June to September.

* Passiflora edulis is commercially grown for its sweet, edible fruits. It needs a frost-free environment and has white/purple flowers.

* Passiflora x exoniensis AGM is fast-growing and evergreen. It produces rose-pink flowers with purplish-blue crowns from summer to autumn.

* Passiflora ‘Justine Lyons’ is a new hybrid, hardy in London, with mauve flowers from May to November.

* Passiflora mollissima AGM has pink flowers from July to September and banana-shaped, edible fruits. It needs a heated conservatory.

* Passiflora ‘Purple Haze’ has mauve and purple flowers with darker filaments. It looks very exotic and can be grown outside in milder areas.

* Passiflora quadrangularis AGM is a popular conservatory choice. It produces exotic red and white flowers from July to September, followed by large fruits.

* Passiflora rubra has stunning red flowers followed by orange fruits. It is half-hardy and evergreen.

* Passiflora ‘Star of Surbiton’ is a new cultivar, which is hardy in milder areas. It has large, scented, blue, white, and purple flowers.

* Passiflora x violacea AGM has purple flowers and needs a minimum temperature of 7°C to 10°C.

Passiflora caerulea AGM: the most widely available outdoor passionflower prefers well-drained soil and the shelter of a house

Passiflora ‘Amethyst’ AGM: tough, vigorous, and hardy down to -2°C