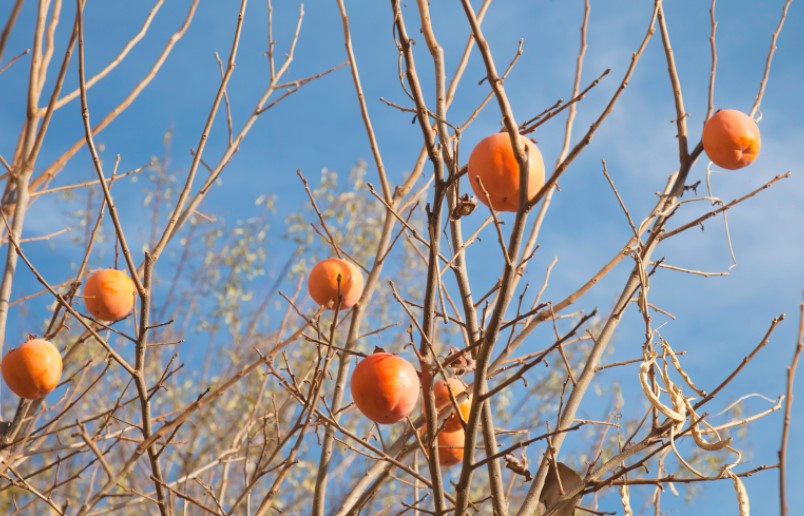 Ever tried a fruit that looked like bright orange pointed tomatoes but made your lips pucker from its bitter taste?

You might have had the pleasure of tasting an unripe Persimmon, one Redland’s favorite fall fruit. Persimmon’s botanical name is diospyros.

This is Greek for “food for the gods.”

There are many varieties of persimmons around the world, but only three are known in America today.

Diospyros Virginiana, also known as American persimmon and significant for its historical value, is the hardiest species on Earth. It is only native to the United States.

Millions upon millions of wild persimmon trees dotted the American landscape east from the Mississippi and were filled with tiny orange fruits that shined through the snowfalls.

However, early settlers and explorers of North America considered them unpalatable.
They were amazed to learn how to eat persimmons directly from Native Americans.

Thomas Hariot, a scientist on the second (1585) Roanoke expedition, described the persimmon as “red like cherries and very sweet.” Captain John Smith, an early 1600s Jamestown colony captain, said that persimmons are as good as apricots when they’re ripe.

But that if it’s not ripe, it can cause a man to suffer a lot. Spanish explorer Hernando De Soto had bread from dried persimmons, while John Bradbury, an English naturalist, enjoyed similar persimmon bread from the Osage tribe.

Our native Diospyros Virginiana, or American persimmon, is not as important. They are very different from the persimmons that we enjoy in the autumn today.

The dominant variety in America is Diospyros Kak or Japanese persimmon. Also known as hachiya. Although it is not a Japanese native, it was introduced to the United States by Chinese immigrants. It is Japan’s national fruit and was first introduced to Japan over 1,000 years ago.

This persimmon is a global fruit that originated in China and Japan. It has been cultivated for over 100 years in France, Italy, and other European countries.

In 1855, Commodore Matthew Perry opened Japan up to the West and forever changed our view of persimmons.

He brought back persimmon trees he had planted in Washington D.C. upon his return to the United States. A few years later, the first Japanese-persimmons arrived in California.

Hachiya is the most popular Japanese persimmon, and it’s well-known for its bright orange color, pointed tomatoes shape, and robust flavor. To be enjoyed, it must be fully ripe (mushy). It has a similar taste to an overly sweet apricot but with a smooth, slippery texture.

Fuyu is another Japanese persimmon. It is also brightly orange but is not astringent. It can be eaten firm, just like an apple, skin and all. It looks similar to a medium-sized tomato, with a flat bottom.

They can be diced and added both to fruit and vegetable salads.

All persimmons provide a good source of vitamins, minerals, and fiber. These fruits contain vitamin C, beta-carotene, small amounts of protein, moderate calcium, and a lot of potassium.

Hachiya is today’s 2most popular variety. It has been used in countless recipes, including bread, salads. Waffles. Cookies. Cakes. Muffins. Ice cream. Candies. Sauces. Persimmon pudding is one of the most loved recipes.

There are many variations, and it has been served at The White House. In December and November, Hachiya persimmons are available. Pick them while they are still hard and unripe.

Pick persimmons that have a firm texture and let them ripen at room temperatures until they become completely soft. Patience pays off. Freshly ripened fruits will be unmatched in sweetness. Some people liken it to ambrosia, which is true “food for gods.”

Your hachiyas can also be dried. You can also cut them when they are still firm and unripe. Persimmons that have been dried will lose their distinctive astringency. They will taste delicious and have a similar texture to dates.

How to Store Persimmon Fruit

Also, freezing is a great storage option. You can place the ripe fruits in an airtight container and then freeze them. You can also freeze the fruit whole for up to six months before they ripen.

They can also be frozen, which is said to soothe the stomach.

Persimmon trees are not large and can only be used as lumber. Persimmon wood, however, is highly prized. Persimmon wood belongs to the ebony clan and has the extraordinary strength and hardiness of this family.

Persimmon wood is used to make shuttles for textile looms, as well as pool cues. Before introducing titanium, persimmon was used in golf club heads because of its durability and ability to withstand the impact of swings.