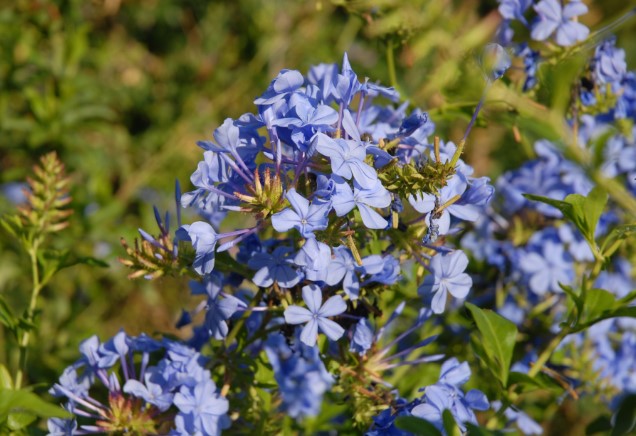 Plumbago auriculata or cape plumbago is one of many ornamental shrubs that flourish in Redlands. This robust shrub, a member of the Plumbaginaceae family, has been around since Roman times.

The cape plumbago, a perennial evergreen that is native to South Africa and is a native species. The cape plumbago is a prolific grower, and it blooms in spectacular phlox-like clusters filled with delicate light sky blue flowers. Children often wear sticky cape plumbago flowers as earrings in summer.

Plumbago auriculata, a low-maintenance mounding shrub of pale green that thrives in neglect, is an example.

It can withstand almost any type of soil, as well as full sun and partial shade. Once established, it requires only average watering but is drought-tolerant.

The cape plumbago flower best when it is planted in well-drained, humus-rich soil and given full sun. Regular watering is essential.

The plant will bloom after it has been cut back or after a growth flush. It bears new growth and flowers after being cut back. Deadheading seems to accelerate reblooming.

Cape plumbago can grow quickly and reach up to 3-8 feet tall with a similar spread. However, it can be kept compact and low with trimming. Cape plumbago attracts birds and butterflies but is not usually affected by diseases or pests.

With its abundant blue flowers, the cape plumbago has been used in many other applications, including groundcovers and compact mounded shrubs.

Cape plumbago can also be propagated by cuttings or seeds. It is used to treat warts, broken bones, and wounds and dispel bad dreams in some areas.

For centuries, plumbago was known as leadwort because it was thought to cure lead poisoning (it doesn’t).

The genus name of plumbago is also linked to lead — the Latin name for lead is “plumbum”. The word “plum” for lead also turns up in our language with plum lines and plum bobs — lines weighted with a lead ball.

This link between plumbago and lead dates from the concept of complementary medicine when some physical property of a plant, such as a shape or colour of its flower or leaf, was seen as resembling part of the body or some other feature of the disease.

It was the soft blue coloured flowers of plumbago that led to the link with lead.
Though plumbago is ineffective against lead poisoning, some species, including P. zeylanica, are considered to have some medicinal value — but it can also be harmful to the liver and kidneys.

While the species has pale blue flowers, which is the most commonly seen in gardens, there are other flower colours, including white (alba) and a deep, almost forget-me-not blue sold as a royal cape.

As well as having stronger blue coloured blooms, the royal cape is less prone to suckering than the species, making it a more garden-friendly plant.

It can also be cultivated in a large pot or raised garden bed.

Use as a ground cover for large open areas, cluster near foundations, grow as small hedges, and use a plant or two to fill container gardens and planters.