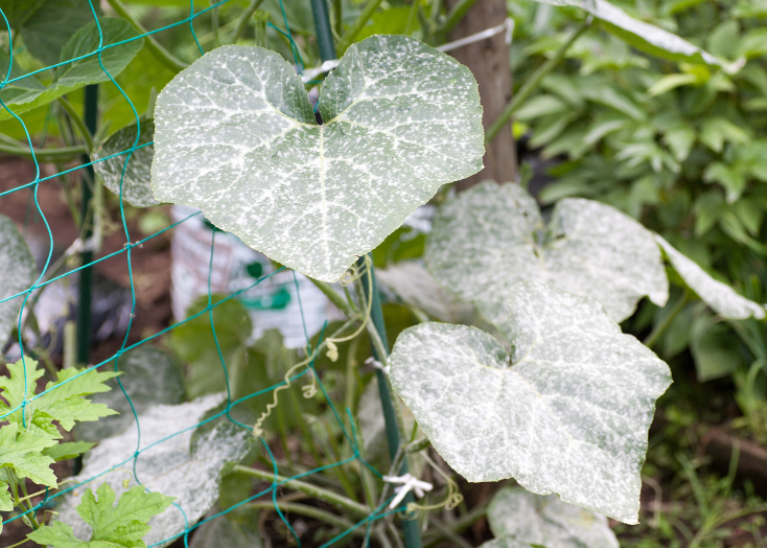 Do Your Pumpkin Leaves Have White Dusty Mildew?

What Is the Cause of White Pumpkin Leaves?

The powdery mildew on our pumpkin leaves is caused by a leaf infecting fairly frequent disease.

The term “powdery mildew” refers to a set of diseases caused by similar fungi. Each has a distinct host, but they all have an identical look — a grayish-white, powdery carpet found on leaves, stems, and flowers.

Unlike other fungal infections, Powdery mildew thrives in warm environments and does not require moisture to proliferate.

How to Remove Powdery Mildew from Pumpkins

While powdery mildew on pumpkins is unappealing, a minor case is not dangerous. However, if left untreated, the condition will spread. Powdery mildew shows as white, powdery specks at first. 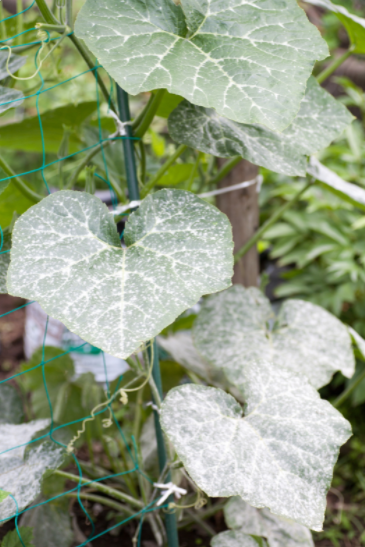 These spots develop gradually, and a seriously afflicted pumpkin may have a lower yield, a shorter growing time, and pumpkins with limited flavor. Before understanding how to treat powdery mildew in pumpkins, it’s a good idea to understand its life cycle.

Fungi develop spores in the spring, subsequently released into the air. When they contact an appropriate host and the favorable conditions, they infect the plant.

As the infection proceeds, the first white spots enlarge and combine. The fungus overwinters on plant waste before restarting the cycle when the temperature rises above 60 degrees Fahrenheit (16 degrees Celsius).

Although powdery mildew on pumpkin leaves does not need water to sprout, high humidity is a concern. High humidity encourages the development of spores. Powdery mildew thrives in temperatures ranging from 60 to 80 degrees Fahrenheit (15 to 26 degrees Celsius), shade, and high humidity.

Steps You Need To Take

Remove contaminated leaves, vines, or blooms if the powdery mildew on the pumpkins appears to be limited. When the illness starts, the plant may have enough time to finish producing pumpkins.

If the environment for the growth of powdery mildew remains good, it will recur. Cucurbits, such as pumpkins are vulnerable to this disease. To resist the disease, plant them in full sun, allow for excellent air circulation, and avoid using too much fertilizer.

Make use of a slow-release fertilizer. However, they will likely require fungicide spray. Fungicides are classified as either protectants, eradicant, or both. Neem oil and jojoba oil are two oils that function well as eradicant while also acting as protectants.

Other horticultural oil brands may also be used. Do not spray within two weeks of a sulfur spray or when the temperature exceeds 90 degrees F. (32 C.).

For generations, sulfur has been used to treat powdery mildew in pumpkins and other cucurbits, but it must be administered BEFORE disease signs show.

Apply sulfur when the temperature is at or above 90 degrees Fahrenheit (32 degrees Celsius) and within two weeks of an oil spray.

It is harmless to people and animals and kills the powdery mildew pathogen, but it is not as effective as oil or sulfur.

Angular leaf spot is mainly a disease of cucumber, but it also damages watermelon, squash, and melon.

The leaf lesions may produce a white, milky exudate on the lower leaf surface before dropping out, leaving holes up to 30 mm in diameter. The nearly circular fruit lesions, smaller than those on the leaf, become white to tan and often crack.

Infected fruit may rot due to secondary soft rot bacteria entering the fruit through these lesions.

The bacterium overwinters in the soil or on plant debris and can also reside on the seed surface or below the seed coat. Since it is seed transmitted, disease-free seeds or seed treatment with hot, acidic preparations is recommended.

Seeds should be produced where the disease does not occur, with at least two years between cucurbit crops in a field. The pathogen is also disseminated by the cucurbit leaf beetle (Aulacophora femoralis), and control of this insect helps to contain angular leaf spots.

Keeping the plants dry by avoiding excessive overhead irrigation in the field or lowering relative humidity in the glasshouse reduces bacterial transmission and proliferation. Under wet conditions, farmworkers and equipment may spread the disease from infected to healthy plants.

Therefore, it is best to harvest when the foliage is dry. Fruit should be handled carefully to prevent wounds, for example, by cutting rather than pulling the fruit off the vine.

Copper-containing bactericides have been used to combat this pathogen, often with limited success.

For cucumber, the disease is best controlled through resistant cultivars. The original resistant type line is Gy 14 (PSL gene), but cultivars such as ‘Poinsett’ slicer and ‘Addis’ pickle are resistant. Several genes besides PSL may modify resistance in cucumbers.

Symptoms include intense yellowing, stunting of vines, and excessive branching of affected plants. The disease affects summer squash with yellow fruit more than other cucurbits.

The pathogen overwinters in weedy plants (dandelion, galinsoga, plantain, thistle, and wild lettuce) and is transmitted to crop plants by the six-spotted leafhopper (Macrosteles fascifrons).

Disease control is by eradicating the overwintering host plants from near crop production fields and insecticides for the leafhopper.

Bacterial fruit blotch is a severe disease of watermelon. It first became necessary in 1989 in Florida and other southern states of the USA and has been a problem there ever since.

The causal agent, Acidovorax avenae ssp. citrulli is seed-borne and may be transmitted by means other than seed; for example, it is often mechanically spread in glasshouses where transplants are grown.

Before planting that lot, disease assays of seed lots are recommended and are done by growing seedlings in a glasshouse under ideal conditions for disease development. Testing helps prevent a high incidence of infection but cannot be relied on entirely to avert seed-borne transmission.

Transplants should not be cultivated in the same glasshouse where plants from another seed lot are contaminated with the bacterium. Copper-based foliar sprays help to control the disease.

Planting in fields with recent crops of watermelon or other pathogen hosts, including citron, melon, and eggplant should be avoided. Resistance has been identified in the foliage of some accessions and the fruit of other acquisitions of Citrullus.

Bacterial leaf spot of squash plants in India, Australia, Europe, the USA, Japan, and elsewhere is caused by Xanthomonas cucurbitae. Cucumber and other cucurbits are sometimes attacked as well.

Diseased fruit will rot and maybe a source of infection for fruit nearby. Overhead irrigation can spread the bacterium, which survives from one season to the next, on plant material in the soil.

The pathogen is also seed-borne. Genetic resistance has been found in Cucurbita moschata and C. okeechobeensis.

Bacterial rind necrosis is caused by Erwinia carnegieana. Brown necrotic areas occur in the rind of melon and watermelon and sometimes extend into the flesh. Cultivars differ in degree of susceptibility.

In watermelon, there may be some resistance in ‘Jubilee’ and ‘Sweet Princess’ compared with the more susceptible ‘Klondike Blue Ribbon.’

Bacterial wilt damages cucurbits in North America and, to a lesser extent, in Europe, Africa, and Asia. It is seldom a severe threat to watermelon, but cucumber and melon plants may be killed.

The first evidence of the disease is a flat green area on the leaf at the site of infection. The vascular system becomes plugged with a slimy substance, and one or two leaves, a branch, or the entire plant may suddenly wilt and die.

Diseased plants are sometimes diagnosed by cutting a branch to determine if a sticky exudate will form strands to the knife when withdrawn from the cut surface.
E. tracheiphila overwinters in cucumber beetles.

Cucumber cultivars that are bitter-free (bi-1 or bi-2), such as ‘Marketmore 80’ and most of the current greenhouse cultivars, are less preferred by cucumber beetles than other cultivars and thus have reduced infection.

In cucumber, a single dominant gene (Bw) for resistance to bacterial wilt is known but, unfortunately, is linked with the m gene for hermaphroditic sex expression (associated with round fruit).

Brown spot, or internal fruit rot, of melon results from infection by Pantoea, ananatis (= Erwinia ananas). Symptoms are yellow-brown spots up to 4 cm in diameter on the fruit.

Damage by other organisms or mechanical injury predisposes fruit to this disease, which is serious in a hot, humid environment.

Salmonella spp. It can cause food poisoning. Cubed or sliced watermelon and melon, convenience foods for the consumer, are regulated under food safety laws in many countries.

Salmonella and other species of bacteria on the external surface of the watermelon or melon can inflict the flesh when the fruit is cut.

Freshly cut watermelons and melons are wholesome and safe. Still, when prepared at the supermarket or restaurant salad bar, bacteria can increase to dangerous levels if the cubes are held at warm temperatures.

Soft rot of cucurbit fruit, especially cucumber and melon, is caused by Pectobacterium carotovorum (= Erwinia carotovora) and other organisms. Water-soaked blotches quickly develop into a wet, soft rot, and the fruit collapses.

Hot, humid conditions favor this affliction. Preventive measures include careful handling to avoid fruit injury, along with the use of chlorinated sprays or dips of the fruit. There are no resistant cultivars.

10 Spice Herbs To Start Growing By Yourself