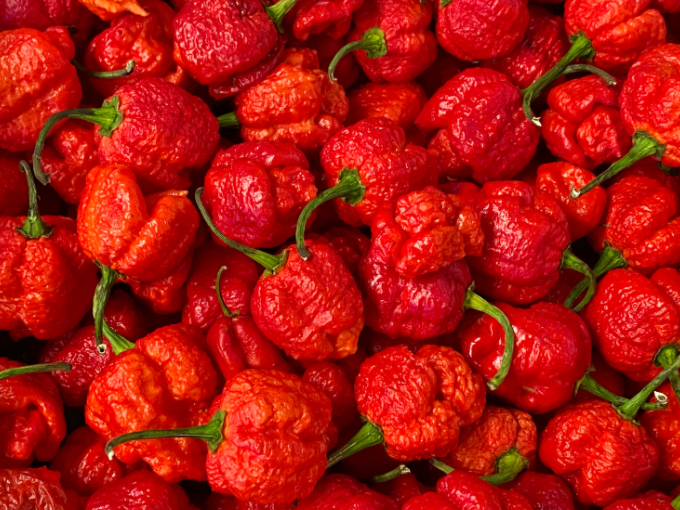 In this article, we will examine one of the earth’s hottest peppers. The Scoville heat system valuation of the Carolina Reaper hot pepper is so firm that it has exceeded other peppers greatly in the last decade. Because this is not a hardy plant, recognizing how to produce Carolina Reaper can help you harvest it before the winter season takes place.

Grow Carolina Reaper Hot Pepper if you like hot, spicy food. The Guinness Book of World Records credits it to be the hottest pepper; however, Dragon’s Breath is a rumored adversary. Even if Carolina Reaper is no longer the record holder, it is still hot enough to produce contact burns and chili burns and should be used with caution. 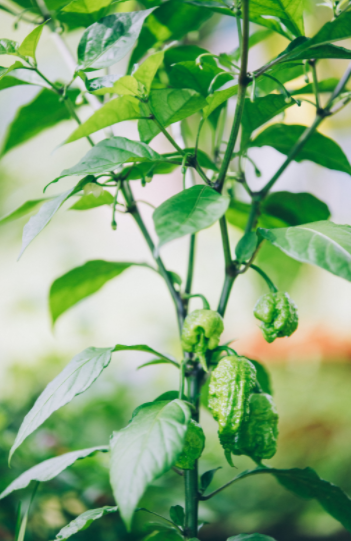 The Carolina Reaper Hot Pepper is a hybrid of the well-known ghost pepper and the red habanero. The examination took place at Winthrop University in South Carolina. The highest Scoville units measured were over 2.2 million, with an average of 1,641,000.

The sweet, fruity flavor is unique in hot peppers at first. Fruit Pods are an exciting form. They are crimson, fat fruits with a scorpion-like tail. The skin may be smooth or covered with tiny, pimply pimples.

How to Start the World’s Hottest Peppers

If you’re a glutton for torture or enjoy a challenge, you’re probably thinking you should try growing Carolina Reaper Hot Pepper. The pepper plant is no more challenging to grow than any other pepper plant, but it has a very long growing season and, in most circumstances, must be grown inside before planting out.

The plant ripens in 90 to 100 days and should be started indoors at least six weeks before planting outside. In addition, germination might be delayed, taking up to two weeks before you see a sprout.

Use light, well-draining soil with a pH range of 6 to 6.5. Plant seeds shallowly, with only a light dusting of earth on top, and then water evenly.

How to Grow Carolina Reaper in the Garden

Harden seedlings off a week or two before transplanting them outside by progressively exposing them to outdoor environments. 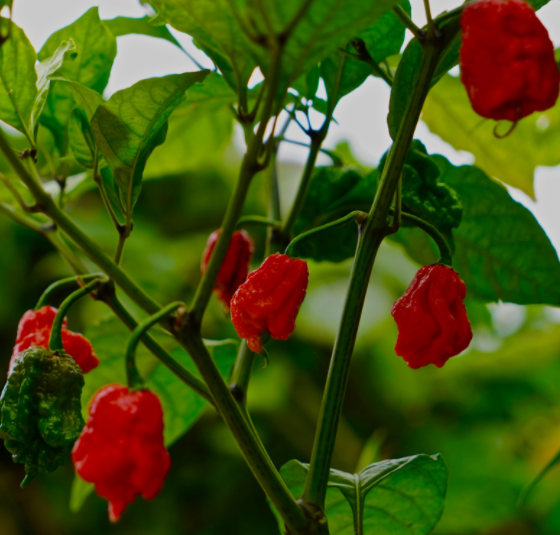 Maintain an equal, wet but not soggy moisture level in the soil. Feed the plants diluted fish emulsion every week for the first few weeks.

Use Epsom salts or a Cal-mag spray to apply magnesium every month. As soon as buds form, apply a fertilizer such as 10-30-20 once a month.

HOW HOT IS A GHOST PEPPER IN CONTRAST TO A CAROLINA REAPER?

Ghost peppers (aka bhut jolokia) are likewise exceptionally spicy and one of the essential super-hot peppers, but the Carolina Reaper slopes up that intensity to a whole different level.

The Scoville Heat Units (SHU) of ghost peppers range from 855,000 to 1,041,427, meaning the scorching Carolina Reaper is more than twice as hot.

The skin has a rough surface, while others have smoother skin. One distinguishing quality is a scorpion-like tail, similar to a scorpion pepper.

WHAT IS THE TASTE OF THE CAROLINA REAPER?

Despite its blistering concentration, the Carolina Reaper pepper is delicious and sweet. It’s incredible as a dry powder for boosting heat and flavor, as well as a gravy or hot sauce.

It is best used lightly because a little goes a long way. Stir some into Thai foods for added heat or into larger pots of chili, soups, or stews.

Can A Chili Pepper Really Cause An ‘Incapacitating’ Headache?

After eating the world’s hottest pepper, a man was hospitalized with ‘thunderclap’ headaches.

This would be unprecedented if true. According to the study’s authors, hot peppers have never been suspected of causing RCVS, which means that this is huge news.

The only problem is that the authors may have been too quick to blame the Carolina Reaper.

According to other neurology and headache research experts, there is no clear evidence that capsaicin, the active ingredient in chili peppers, causes artery narrowing.

RCVS does not always result in thunderclap headaches, which cause “incapacitating” pain that “brings people to their knees,” according to David Dodick, chair of the American

Migraine Foundation. Dodick rates a thunderclap headache as a ten on a scale of one to ten.

The patient in the study “experienced brief intense thunderclap headaches lasting seconds” a few days after gobbling down the entire Carolina Reaper during a hot-pepper-eating contest, according to the report.

The man was in so much pain that he was taken to the Bassett Medical Center in Cooperstown, New York.

The common jalapeno pepper has a maximum heat of about 8,000 Scoville heat units, or SHUs, which is the primary measure of a chili pepper’s heat.

According to Guinness World Records, the most recent tests, conducted over a three-year period, officially confirmed the Reaper’s status as the hottest pepper on the planet.

Ed Currie, the founder of PuckerButt and the mad scientist behind the hybrid Carolina Reaper, says the recent buzz has only piqued people’s interest.

He claims that orders for Reaper seeds, dried peppers, and hot sauces have more than doubled from the previous week.

For people of a certain disposition – thrill-seekers, daredevils, people who never wish to taste their food again – the Carolina Reaper is food’s, Mount Everest.

It must be defeated. Countless souls have entered contests in an attempt to tame the Grim Reaper. Some people can pop them like candy and only experience mild frat-boy symptoms.

Others are reduced to drooling, howling, semi-delirious organisms incapable of functioning on their own.

The man in the study was unusual. He began to have neck and head pains. Then there were the thunderclap headaches.

According to the study, the man’s primary physician, neurologist Dr. Gregory Cummings, performed an angiogram, which revealed no signs of a brain aneurysm but revealed an “unexpected” narrowing of certain cerebral arteries.

RCVS, as the name suggests, resolves itself within days or weeks, though a person suffering from the condition may experience thunderclap headaches along the way.

After ruling out drugs and other possible causes, the researchers turned their attention to the Grim Reaper.

They discovered two case reports (one of which was cited in the study) in which cayenne pepper pills used for weight loss were linked to heart attacks and coronary artery narrowing.

“So that’s why we’re thinking it’s possible that this was caused by the hot pepper, the Carolina Reaper,” said lead author Kulothungan Gunasekaran, a doctor of internal medicine at Henry Ford Hospital in Detroit.

However, according to Dodick, a Mayo Clinic professor of neurology, capsaicin usually causes blood vessels to dilate rather than constrict.

Consider how your face can turn red after eating something spicy, said Dodick. Capsaicin is dilating your capillaries, which are the smallest blood vessels in your body.

Dodick also stressed that cerebral artery narrowing does not always result in thunderclap headaches. In other words, the fact that the man had narrowed brain arteries does not imply that they were the source of his headaches.

According to Dodick, 25% of patients who have thunderclap headaches do not have RCVS at first, though it may develop days or weeks later.

Furthermore, according to Nauman Tariq, director of the Johns Hopkins Hospital Headache Center, “Millions of people in Asia consume hot chiles as part of their diet… However, no other studies, let alone RCVS, have found this link between eating hot chiles and RCVS.”

However, In an email, Tariq mentioned that capsaicin has been proven in at least one research study to influence the vascular smooth muscle, which can narrow the arteries.

So, regardless of whether the pepper triggered the patient’s RCVS or his flight-or-fight response, “the scientific evidence is not solid enough for people to discontinue this [pepper’s] use at this time just because of one particular case,” he wrote.

Gunasekaran was not defensive when confronted with the argument that the sympathetic nervous system could have triggered the patient’s RCVS.

“That is a possibility,” he said. “Any high level of stress can cause sympathetic activity, which can lead to vasoconstriction.”

“Ours is the first case,” he clarified. “It opens the doorway to a lot of research in this field.”

The truly terrifying news is that Currie with PuckerButt has already applied to Guinness for an even hotter pepper.

Currie describes the hybrid as Pepper X, and tests conducted over the last five years indicate that it will outperform the Carolina Reaper.

During one year of testing, Pepper X averaged 3.189 million SHUs. It averaged 2.5 million SHUs on the low end.

Currie claims that a group of people who recently tried Pepper X all puked. “Unless you’re used to it, it’s not a pleasant experience.”