The Plant With Ambiguous Name 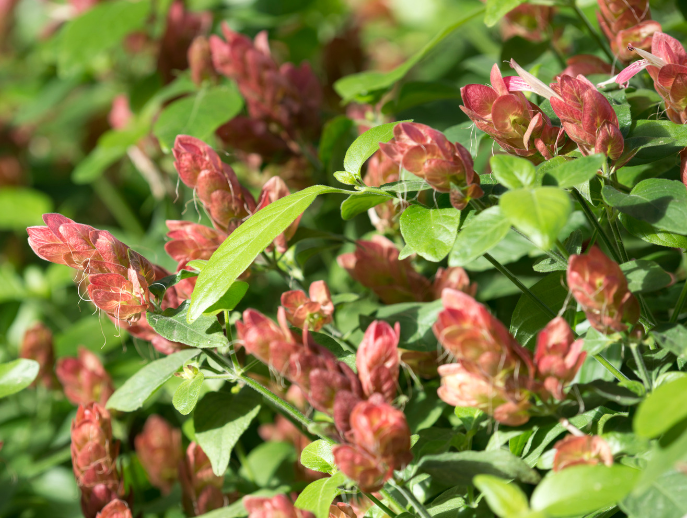 The shrimp plant or Justicia brandegeeana is an herbaceous evergreen perennial shrub. It is a member of the Acanthaceae family in the genus Justicia.

This genus, Justicia, contains more than 400 species that mainly live in the tropics and subtropics around the world.

The genus was named in honor of James Justice (1698-1763), a Scottish horticulturist, botanist, and author.

The species brandegeeana, sometimes misspelled brandegeana, was named for American botanist Townshend S. Brandegee (1843-1925), a pioneer Western botanist whose specialty was California, Baja, and western Nevada. He was responsible for introducing many Mexican and drought-resistant plants into California.

Native to Mexico, Justicia brandegeeana is a much-loved and sought-after ornamental shrub in Southern California. This garden favorite is easy to grow and easy to care for, and it fills with those exotic showy blooms almost year-round.

The shrimp plant is happy in the morning sun or partial shade; however, the flowers tend to fade in full sun. Justicia brandegeeana prefers fertile, well-drained soil, but don’t let it become parched. The leaves might wilt. This hardy plant is usually not bothered by pests.

In Redlands, the shrimp plant can bloom almost all year long, making it great as a container plant for patios, atriums, pool areas, and entryways and as an addition to mixed perennial beds and borders.

Justicia brandegeeana can grow about 3 feet high by 4 feet wide. The stems may become fragile if allowed to grow unchecked. Prune back regularly to encourage a more bushy growth habit and increase flowering.

The unique flowers of the shrimp plant are magnets for hummingbirds and butterflies. The Justicia brandegeeana is considered among the top hummingbird plants.

And you can have your choice of shrimp colors. Many cultivars are now available, offering flower colors including yellow, pink, green, cream, and dark brick-red, plus leaves varying from deep green to purple.

This is such a particular plant you might want a few more. Shrimp plants can be easily propagated from cuttings, or they can be grown from seeds.

If using seeds, select your desired cultivar seeds at your favorite nursery or harvest seeds from your plants. Watch and wait for the seed heads to ripen and fully dry out.

Collect your seeds, store them in a cool, dry place and plant them when you are ready. Or, in early summer, you can try cuttings. Select a non-flowering shoot with three to four leaves on end and cut it about 4 inches long just below a node.

Remove the leaves on the lowest third of your cutting, dip the cutting in rooting hormone and place it in a container of the potting mixture.
Water, watch and plant your new shrimp plant after it is well-rooted.

Flowers are born at the end of the stalks and appear throughout the year in Central and South Florida. Flowers produced in 4-inch spikes are tubular white with two lips and protrude between overlapping, colorful bracts or modified leaves.

The fruit is a capsule that splits to expose four seeds. Pachystachys means a thick spike in Greek.

Although the shrimp plant does not produce shrimp, its unique and profuse blooms seem to resemble shrimp, particularly if you squint at them from a distance.