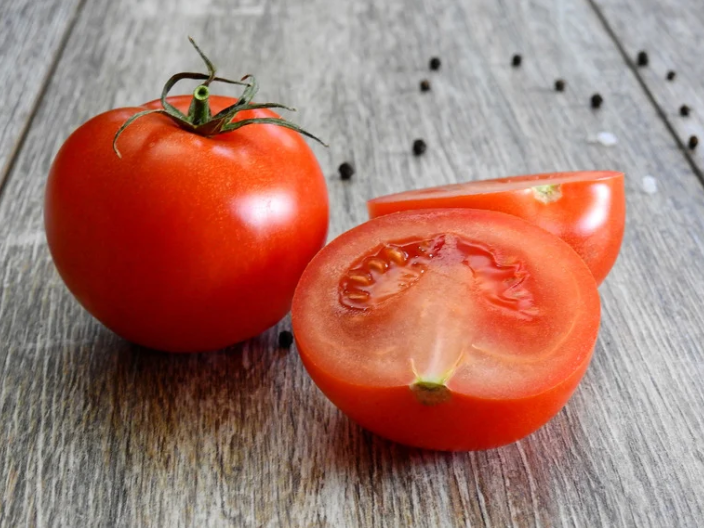 Tomatoes were thought to be poisonous in colonial America and were only grown as ornamental plants. This is the root of the story of Tomato Plant Toxicity.

Despite his doctor’s warning, a prominent citizen decided to put that to the test “The stupid colonel will froth at the mouth and collapse from appendicitis.

All that oxalic acid in one dose will kill him.”

Col. Robert Gibbon Johnson stood on the courthouse steps in Salem, New Jersey, on a warm September day in 1820.

In front of a large crowd, he declared, “This luscious scarlet apple will one day be the foundation of a great garden industry, eaten and enjoyed by all.”

He then ate the tomato and savored it in good health. So the story goes.
Regardless of whether the story is accurate, the colonel’s prediction has come true.

Tomatoes are among the most popular edibles grown in American gardens today, with thousands of varieties available.

They are all descended from a plant native to Peru, Bolivia, Colombia, and Chile’s Andean regions. Lycopersicum esculentum is its botanical name.

The plant belongs to the nightshade family, which includes several poisonous species such as belladonna and jimsonweed and the delicious potatoes and peppers.

That connection is undoubtedly why many people thought tomatoes were poisonous for so long.

Every year, gardeners debate the best time to plant tomatoes in their gardens. If you plan to buy tomato plants, wait until after May 1 to plant them, depending on the weather.

In mid-May, planting tomatoes outside on Mother’s Day weekend is a good rule of thumb. Planting earlier will not benefit you because the tomatoes will sit there until it is warm enough for them.

If you plan to cultivate tomatoes from the seed outside, wait until the soil temperature reaches 60 degrees for the best and fastest germination.

Growing Tomatoes From The Seed

If you plan to cultivate tomatoes from seed indoors, you should sow the seeds 6–8 weeks well before the regular last frost date, around April 15 in St. Louis.

Start the tomato seeds indoors 8 to 10 weeks earlier, as early as mid-January, if you want to beat the neighbors. Use fluorescent lights to ensure vigorous, healthy plants that can produce tomatoes as early as the end of May.

Plant the seeds in moist horticultural vermiculite or perlite, and individual transplant seedlings into 4-inch pots once the second pair of true leaves appear. Use commercial potting soil that has been sterilized.

I prefer to use a slow-release pelletized fertilizer explicitly designed for the flowering and fruiting plants. Read the label to determine how long the fertilizer will last; you won’t need to fertilize again for about four months.

Transplant the plants into 8- to 10-inch plastic pots when they reach 6 to 8 inches.

Half of the lower leaves should be removed and potted. The plant up to the bottom of the remaining leaves before inserting it into the soil; this will encourage the development of a large and healthy root system.

When planting tomatoes outside, use the same method as before, but this time plant the seedling on a slight slant. Along the buried stem, new roots will form.

Regularly brush your hands over the foliage when tomatoes begin to flower. Because the pollen is airborne rather than insect-borne, this ensures pollination.

Some gardeners use products known as blossom sets or hormone sprays to set tomato fruits. It should be noted that for these products to be effective, nighttime temperatures must be above 55 degrees.

They are ineffective during prolonged periods of high heat when the temperature exceeds 85 degrees.

Tomatoes are classified into three types. The first group consists of small compact plants known as determinate, which bear almost all fruits at once and stop bearing when they reach their full size with stems up to 18 inches long.

The semi-determinate group of slightly larger plants will bear fruits until their stems are 24 inches long.

Finally, indeterminate plants continue to grow and fruit indefinitely until killed by frost or disease.

This is the category for the large beefsteak tomatoes famous during the summer. Some gardeners allow indeterminate tomatoes to ramble over the ground, while others stake or cage them.

Caging is the simplest method, as it allows for more plants in less space and saves labor by eliminating the need to stake and tie the vines.

Look for tomatoes with high disease resistance, as indicated by the letters following the variety name.

The more letters, the better, but remember that good disease resistance is present naturally in healthy plants.

Modern tomatoes are typically hybrids, but many old varieties now known as heirloom plants reproduce in the field naturally through open-air pollination.

The Brandywine tomato is a traditional, field-bred tomato. It dates back to 1885 and is thought to have originated on Amish farms in Pennsylvania.

Heirloom plants are plant strains that existed before the 1950s; by that definition, I guess I’m also an heirloom.

For tomatoes to be toxic to animals, massive amounts would need to be consumed. Tomato leaves have a strong, pungent odor and are covered in prickly hairs, making them unpalatable to most animals.

Tell that to some dogs or even cats who habit nibbling on any plant, especially when they are young.

Tomato toxicity symptoms are more severe in dogs than in humans, with many side effects ranging from nervous system problems to digestive problems.

Hold your pets away from your tomato plants to be on the safe side. Some people may be allergic to the alkaloids found in tomatoes and should avoid them.

People on a specific diet or taking supplements may want to speak with a nutritionist or their doctor.

Eat up for the rest of us! The benefits of eating tomatoes are numerous, and the risk of toxicity is barely worth mentioning — unless, of course, you despise tomatoes and want to avoid eating them!